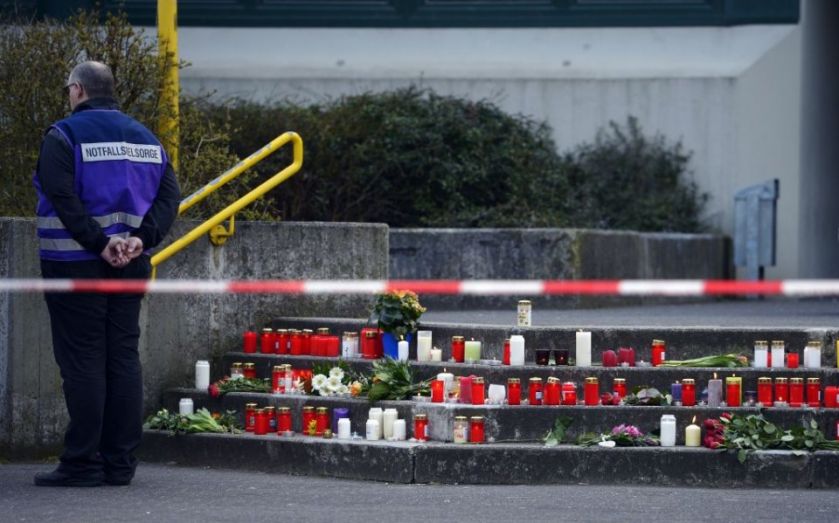 Foreign secretary Phillip Hammond has said it is "sadly likely" British National were among those killed in the Germanwings A320 passenger plane crash in France today. Hammond said he would not speculate as to how many Britons may have died before the information could be confirmed.

This came after French rescue workers  discovered a flight recorder from the jet, which crashed in the in the French Alps today, killing up to 150 people.

Local reports quote official Christophe Castaner, who said that one of the black boxes had been found.
https://twitter.com/Breaking3zero/status/580404059137437696
The search and rescue mission got underway earlier today, with airline operator Germanwings saying it was essential to retrieve the black box in order to establish what happened. Authorities have been clear they do not expect any survivors.

Thomas Winkelmann, who spoke on behalf of the airliner, confirmed that the plane left Barcelona at 10:01am and reached an altitude of 38,000ft at 10:45am. It was flown at cruise for one minute.

He told a press conference that of the 144 passengers, two were babies. A further 16 are thought to have been school children travelling with two teachers.

When asked why the plane lost altitude, and why it left the standard flight path, Winklemann said: "Please forgive me, but I cannot answer that right now. There could be many reasons. We have to clarify what the reasons were; we need the black box, we need access to the crash site, and we will start doing that immediately.

The airline has received conflicting reports about whether an emergency call was made, but have nothing further to say about the quick descent, Winklemann added.

"We cannot speculate at this time," he said.

US officials have been in touch with French, German and Spanish officials to offer assistance. In a statement, US National Security Council spokeswoman Bernadette Meehan said there was no indication the crash was the result of terrorism.

Lufthansa, which owns Germanwings, tweeted earlier today: "We must confirm to our deepest regret that Germanwings Flight 4U 9525 from Barcelona to Dusseldorf has suffered an accident over the French Alps.

"The flight was being operated with an Airbus A320 aircraft and was carrying 144 passengers and six crew members.

"Lufthansa and Germanwings have established a telephone hotline. The toll-free 0800 11 33 55 77 number is available to all the families of the passengers involved for care and assistance.

"Everyone at Germanwings and Lufthansa is deeply shocked and saddened by these events."

Our thoughts and prayers are with the families and friends of the passengers and crew members. 5/5

President Hollande has also issued a statement. Earlier today he said: "The conditions of the accident, which have not yet been clarified, lead us to think there are no survivors."

He added: "I want to express all my solidarity with the families of the victims. A counselling unit will be established to provide psychological support.

"I will discuss the incident with Chancellor Angela Merkel and Spanish King Philip VI, who is visiting us today. As we wait, our first feeling should be one of solidarity.

"This is an air tragedy," Hollande said (Source: Getty)

"I will have meetings with Chancellor Merkel because there were a number of German victims, and I will also contact the King of Spain.

"This is an air tragedy and we will try to understand the reasons and causes of the accident, and obviously we will give the concerned authorities as well as the victims support.

"This is a mourning period, because this is a tragedy that has happened on our territory. I intend to find out if there were other consequences of the accident … and we will find out more in the hours to come."

France’s interior minister Bernard Cazeneuve has said that the pilots made a distress call shortly after take-off, but there is still no clear reason for the crash.

Captain Benoit Zeisser of the Digne-le-Bains police said there were some clouds in the region but the cloud ceiling was not low and there did not appear to be turbulence.

FlightRadar24, which tracks air traffic, has tweeted this:

Flight #4U9525 was descending with a rate of about 3000-4000 feet per minute, which is quite standard for an airport approach.

Reports have said there were 142 passengers, two pilots and four flight attendants on the plane. 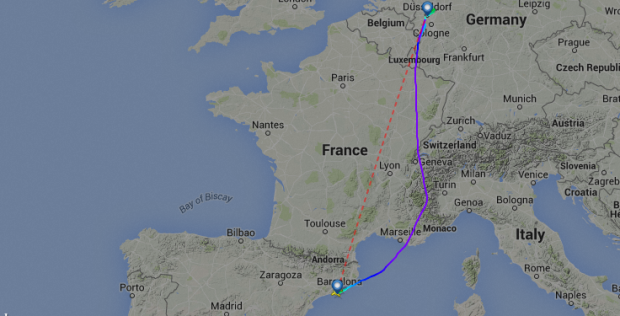 (Source: FlightRadar24)
Local reports suggest the airliner was flying from Barcelona, Spain, to Duesseldorf, Germany. It is believed to have disappeared from radar in the Alpes de Hautes Provence.
https://twitter.com/flightradar24/status/580320612155060224
The plane has reportedly been spotted on the ground near Prads-Haute-Bléone between Digne-les-Bains and Barcelonnette, about 65 miles north of Nice.
Airbus' share price fell as the news of the crash circulated and was down 2.6 per cent at pixel time. 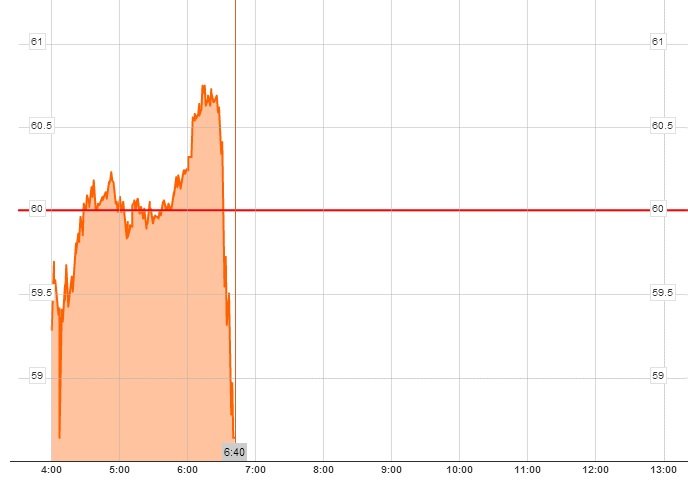