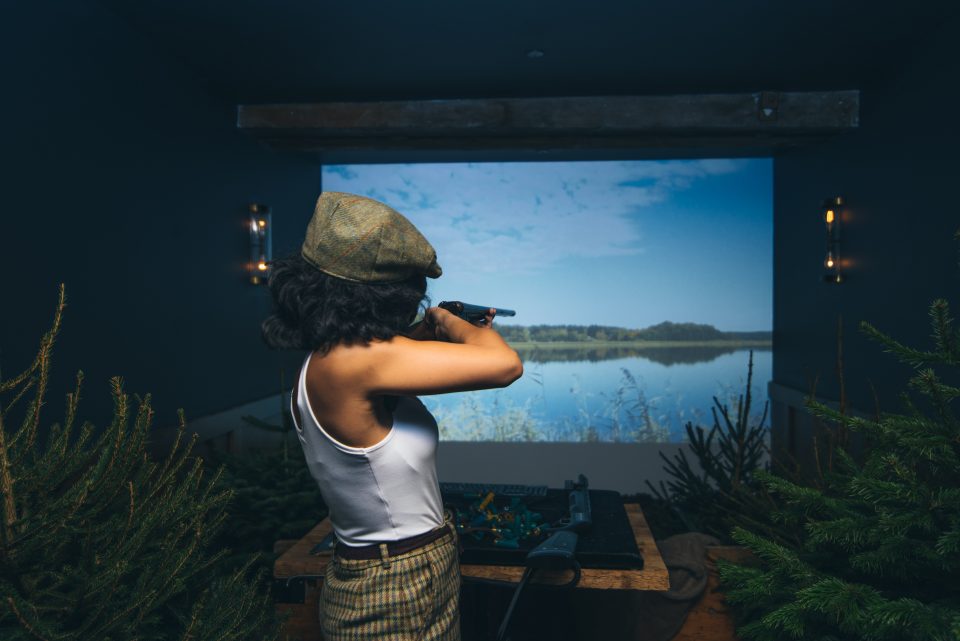 Not often do you stumble upon a shooting range in the middle of the Square Mile, but with the arrival of Smoky Barrels to Devonshire Square, it’s now possible to go great guns on post-work drinks.

Smoky Barrels is the brainchild of the creators of Mac & Wild, the brand of Scottish restaurants that’s been serving up the highest quality wild meat and carefully-selected produce since 2015. With space available under its Devonshire Square restaurant, founders Calum Mackinnon and Andy Waugh, who greeted me clad in kilts, decided to set up a new concept space earlier this year, and Smoky Barrels was born.

Described as a ‘virtual hunting experience’, its visitors are transported to the Scottish Highlands, where, with state-of-the-art Swedish simulation technology, a 10 foot screen and replica shotguns, competitors can hunt all manner of game; pheasants, grouse, deer, wild boar and more. Teams can choose to deck themselves out with tweed and flat caps, and then it’s all guns blazing.

Competitive socialising is on the rise, and Smoky Barrels is the new addition. As consumers are increasingly choosing to spend money on experiences over items, the trend for social activities like this is growing, with existing concepts such as Puttshack, Flight Club and Bounce.

But new kid on the block Smoky Barrels has the edge. Consistent with the values invested in Mac & Wild – food that is hunted and foraged, sustainably sourced and of the highest quality – Smoky Barrels extends the brand with the idea that people ought to know the provenance of their food, and how it reached their plate. Smoky Barrels is a well-crafted idea, created to entertain, of course, but which originates from a passionate love for grub, and a desire for it to be environmentally and ethically sourced. Mackinnon and Waugh are infectiously passionate about their concept and with the creation of Smoky Barrels, they’re sticking to their guns.

More than anything, this is a great fun evening of competition, bringing people together in a buzzing, social environment.

I tried my hand at a few virtual targets, all the while nibbling on accompanying food and drink; Haggis Pops, Pheasant Popcorn, their Scotch egg filled with venison and black pudding, a theatrically presented Smoky Whisky trio, and the infamous Forth Bridge cocktail (which contains Irn Bru – it would be rude not to). Smoky Barrels is as much about the food, whisky and cocktails as it is the experience, further tying together the Scottish strands of the brand.

During the run up to Christmas, the creators have gone one step further, setting up a pop-up festive shooting lodge next door. Bedecked with twinkling lights, festive shrubbery and cosiness, the aromas of mulled wine and smoked whisky fill the air to create a true Highland festive retreat in the City, complete with its own special festive menu and whisky shop. The popularity of Smoky Barrels in its permanent site has been such that more space was needed during the busy Christmas season.

And the plans don’t stop there; the boys are clearly ambitious. Having set up the Christmas pop-up in an impressive two and half weeks, they have grand plans for expansion, including internationally. They want to make the experience of hunting sustainably, if only virtually, a fun, accessible one, and to share some of their expert knowledge on food sourcing along the way, to encourage people to think twice about where their food comes from.

Smoky Barrels is an exciting and refreshing addition to London’s social scene, and the duo is one to watch.