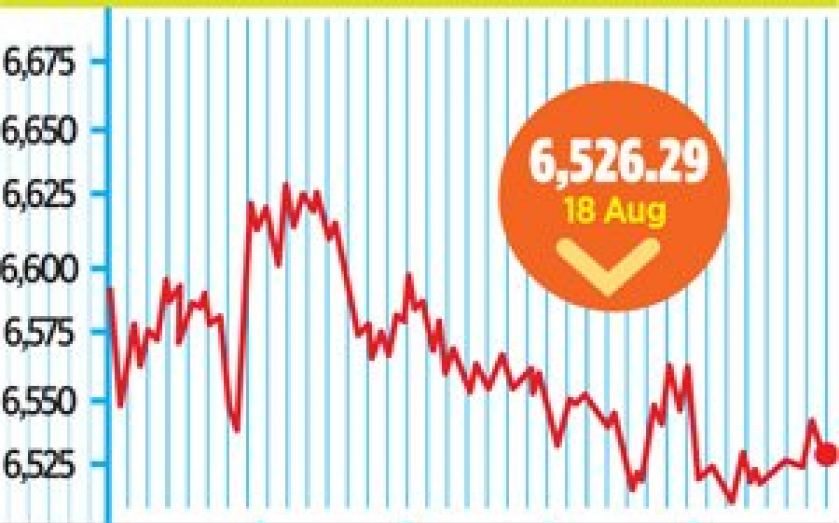 THE FTSE 100 ended lower for a sixth consecutive session yester­day, dragged down by mining stocks as copper prices continue to trade near six-year lows.

Antofagasta was the worst FTSE 100 performer, down 2.6 per cent, while BHP Billiton and Anglo American both declined 2.4 per cent.

On the FTSE 250, Lonmin was the biggest faller, down 7.6 per cent, having touched a new all-time low, and Evraz closed down 4.4 per cent.

Oil stocks also are under pressure after US benchmark West Texas Intermediate (WTI) fell to a new six-and-a-half-year low at $41.41 a barrel. WTI slightly recovered afterwards and when the European stock markets closed it was at $42.19, while Brent oil prices were still close to year-lows at $48.56 a barrel.

Royal Dutch Shell ‘A’ shares closed down 1.6 per cent, BP finished down 1.2 per cent, and BG Group fell one per cent.

Among mid-caps, oil explorer Cairn Energy dropped 7.3 per cent, hurt by a wider after-tax loss in the first half of the financial year.

Bucking the trend for commodity stocks, Glencore closed up 3.7 per cent for the day. The company said it may close its Eland platinum mine in South Africa because of falling prices.

Also on the upside, pharmaceuticals group Shire rose 1.6 per cent. Its US-listed shares rallied towards the end of trading overnight to end up off their intra-day lows.

Also outside commodity-related stocks, Persimmon lost 1.5 per cent. The housebuilder said its pre-tax profit surged in the first half as it boosted margins, sold more homes and did so at higher prices, all while saying that its performance thus far in the traditionally slower summer selling season still looks robust.

However, analysts said the valuation on Persimmon shares looks stretched at the moment and concerns about this appear to have trumped the robust results.

Fidelity China Special Situations ended among the worst mid-cap performers, down 4.5 per cent, after a heavy fall in Far Eastern markets.