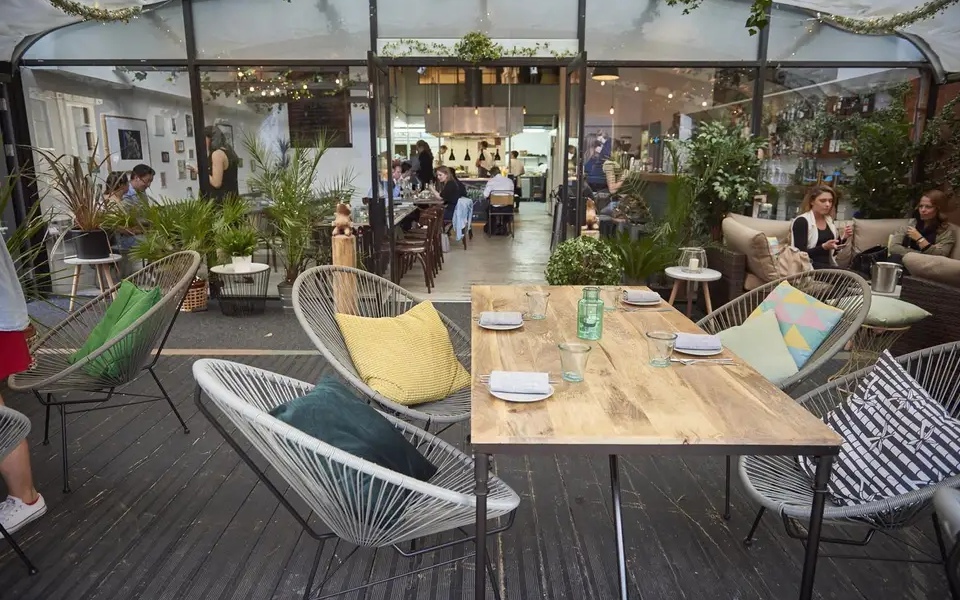 The innovations that have swept through top kitchens in the last two decades began in the laboratories of Nestlé and GlaxoSmithKline. The thickening agents and emulsifiers and gelification powders that allow yuzu gel to stand erect in restaurants throughout Mayfair are the work of lab technicians whose job it is to stop your Mars Bar disintegrating or your Birds Eye lasagne catching fire in the microwave. It’s a sobering fact that more time and effort has gone into developing a packet of Fruit Pastilles than any dish at any restaurant in the world.

Scottish chef Adam Handling, therefore, owes a debt of thanks to those unsung heroes; their handiwork is stamped all over the menu at his new Shoreditch restaurant, The Frog, from amuse bouche to dessert. If there’s a way to make something more colourful, to extract a little more flavour, to add an unusual texture or three, Handling will do it. Then he’ll squeeze some lime on top and add some dill. And make it pink. And dip it in liquid nitrogen. Voila!

It’s hard to believe this is the same chef who was praised for his simple, unflashy cooking when he came runner-up on Masterchef: The Professionals in 2013. If you’ve eaten in Caxton, the hotel restaurant he headed up in St James, you might recognise a few of his new restaurant’s more outré dishes, but even that won’t fully prepare you.

The Frog takes the macho-fiddly cuisine championed by Nuno Mendes and sticks it into what looks like an antipodean-coffee-shop-cum-yoga-space. Half of the dining room sits beneath a hazmat igloo filled with ivy and palms. It has a wilfully disagreeable logo, which looks like it was designed by a teenage boy as a sideline to his business making posters featuring cannabis leaves. It’s called The Frog not because the concept is as mad as a box of them, but because this is the first “leap” – like a frog? – in a planned series of restaurants (for me it brings to mind the Mark Twain witticism that if you eat a live frog in the morning, nothing worse will happen to you all day).

You can go a la carte, but the 10-course tasting menu is the main event, and it’s very reasonable at £40, with matched wine an extra £35 or matched beer for £25.

Things start well with a pair of pork fritters flecked with bright green splodges of lovage puree. They’re briskly followed by “beetroot, beetroot and more beetroot”, which is two tubes of sugar filled with beetroot and yuzu gel, beetroot panna cotta, and a dusting of fuscia beetroot powder. It’s made through a process involving some unpronounceable chemicals, and if you try to skewer it with a fork, it shatters into a thousand sad pieces. It’s nice, but not worth all the effort.

The dishes come thick and fast, each one more overwhelming than the last. It’s 10 courses but it feels like 10 rounds, every one a haymaker to the palate; there should have been a standing count somewhere around course seven. By course nine, we had to throw in the towel.

Salt cod comes with blobs of sweet lime that set your teeth on edge. Mackerel – beautifully presented, excellently cooked – comes with apple and avocado and… lime. The otherwise excellent cube of roast hake with radish sits beside tarragon-infused mash housing a little pool of… more lime. Seriously, enough with the lime.

Lamb with artichoke, spades of wild garlic and, I think, sour cream – no lime! – is another sledge-hammer of a course, so rich you’ll be tasting it for days. There are crab doughnuts on the menu – pilfered from Nuno Mendes, who is an influence throughout – but I had the truffle and parmesan variety; lightly fried, fluffy, delicious.

A pre-dessert of milk ice cream, some kind of dill drizzle and crushed almonds – more echoes of Mendes – was tortuous, like an acid flashback, conjuring a vaguely familiar gustatory memory but twisting it into something that shouldn’t exist, not here, not on this plate, not after all these tastes and smells and oh Jesus I need a break. Just give me a second. I’ll be fine.

A dessert of “nitro tiramisu” comes beneath a big puffy cloud of custard that’s been dipped in liquid nitrogen; its dark heart has the taste and texture of coffee grounds. Handling says he hates coffee, so maybe he didn’t test this one before he put it on the menu. Burnt honey with malted ice cream and toffee is nice until you get yet another unexpected hit of citrus – yuzu? Lemon? Or was it peach? By this stage my tastebuds had taken refuge down my oesophagus.

“Didn’t you like it?” asked the waitress as a second consecutive course was returned virtually untouched.

I meant the dessert. But, yeah, kinda the whole tasting menu. What I really wanted at this point was some white rice and a dry Ryvita.

One or two big punchy dishes lift a meal: 10 of them make the whole thing blend into an unrelenting mulch of flavour.

If you’re into the London restaurant scene, you should probably come and check out The Frog, because there really isn’t anywhere else quite like it. But be prepared for a fight.