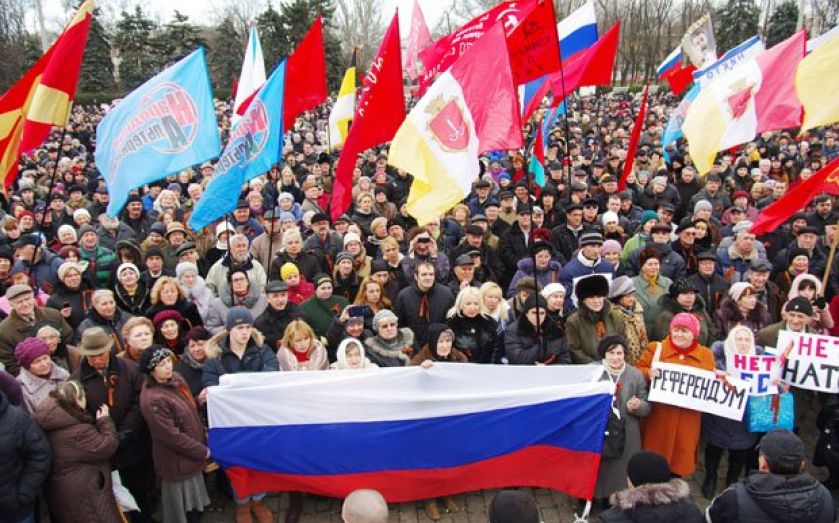 AT FIRST sight, Vladimir Putin’s assertion of Russia’s power and influence in Crimea has been a neat operation with low costs. Moscow’s aggression can even look like a nice little earner. While the EU, US and IMF offer aid to Ukraine, Russia gets to keep the undisbursed $12bn (£7.2bn) of its $15bn soft loan to Kiev, and Gazprom will put the price it charges Ukraine for gas back up from $268.50 per thousand cubic metres to $368.50.

But this isn’t the whole story – there have already been significant costs. Russia’s economy was in a fragile state to begin with, and this new political uncertainty has alarmed investors, both domestic and foreign. Russia’s economic ties to Ukraine are modest but not trivial; they do not benefit from the present situation. And then there is the matter of economic relations with the West: sanctions may indeed prove to be less than savage but, for the time being, nobody knows that for sure.

For the Russian economy, before the events in Ukraine, 2014 was not looking good. GDP only rose by 1.3 per cent last year; investment and net exports fell; consumption growth – the main driver – eased. January showed further deterioration. In February, surveys showed business confidence declining.

Growth is constrained on the supply side: labour inputs are declining, capital inputs are growing only slowly, and most transport and other infrastructure is over-stretched. For demographic reasons, workforce numbers are down (by 0.8 per cent year-on-year in January). Unemployment is historically low (5.6 per cent). Capacity utilisation outside the metals sector is high. The continuing net private capital outflow tells its own story. Financial stimulus, therefore, would only exacerbate inflation (6.2 per cent year-on-year in February). A month ago, there was a chance that growth, albeit very slow, would continue, even though many analysts reckoned there was nowhere for the economy to go but sideways or down.

The intervention in Ukraine, starting on 27 February, narrows the options: “down” looks more likely. And it looks likely regardless of whatever sanctions the West comes up with.

The last thing Russian business and potential foreign investors needed was a leap in political uncertainty. Both the rouble exchange rate against the US dollar and the MICEX (Moscow) stock market index are about 11 per cent down from the start of the year, with a good part of those declines coming since Moscow made its move in Crimea. The Russian central bank had spent $12bn defending the rouble this year up to 25 February. On 4 March alone it spent $11bn. Alfa Bank has changed its end-year exchange rate forecast from 36 roubles to the dollar to 38.

Business confidence, already shaky, is now traumatised. A Gaidar Institute “express survey” late last week found 46 per cent of industrial respondents saying they expected output to fall because of the events in Ukraine; 50 per cent considered those events unlikely to affect their business either way; 4 per cent expected to benefit.

Business relations with Ukraine itself are, so far as official figures show, only a small part of the problem. Less than 5 per cent of Russia’s merchandise trade is with Ukraine, and flows of Russian direct investment into the country have lately been only about 1 per cent of total Russian outward foreign direct investment. However, many Russian firms have subsidiaries in Ukraine. The list includes the metals firms Evraz, Mechel and Rusal, as well as Rosneft, Alfa Bank and the telecoms companies Vimpelcom and MTS. Those subsidiaries will probably survive the confrontation between the two states, but head offices in Moscow will not have been amused by the latest developments. Moreover, the estimated cost of an annexed Crimea to the Russian budget is around $3bn a year.

Sanctions imposed by the US and Europe could add to the costs for the Russian economy. Visa bans for high officials and a curtailment of interbank funding for Russian state banks would be a start. These costs would fall on Western businesses as well as on Russia, and that limits their credibility, especially as threats from Europe. It is in Europe, after all, that half of Russian trade is conducted and most of the Russian elite’s foreign assets are held.

But the point to be made is that, even if Western sanctions prove to be unconvincing, Putin’s Ukrainian adventure will damage the Russian economy anyway. The bad news for the West, however, is that, as long as Putin can come out of this looking like a political winner, he and his close allies are unlikely to be deterred. Their record in evading fundamental economic reform tells us that, for them, politics always trumps economics.

Philip Hanson is associate fellow in the Russia and Eurasia programme at Chatham House.