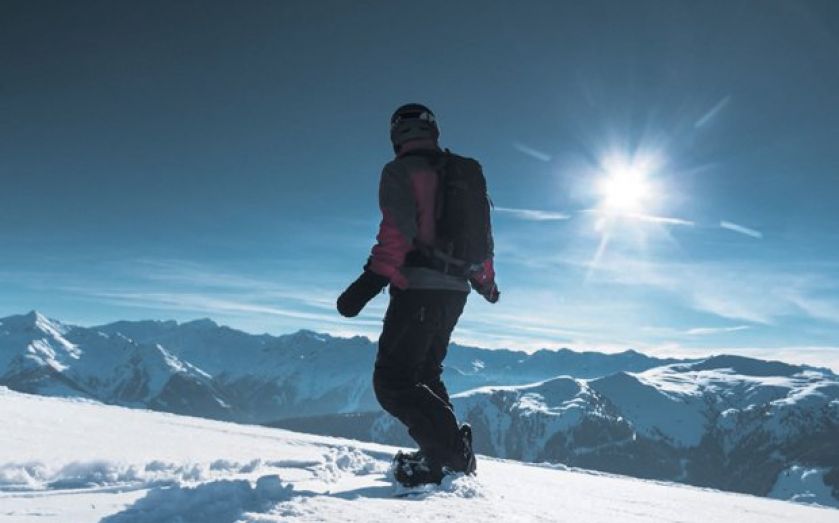 THE FACT that I fall into the so-called “grays on trays” category – snowboarders of a certain age – should have warned me off. That, and the US research showing snowboarding’s heyday may be over, with skier numbers and ski sales on the up and snowboard beginner lessons and equipment sales waning.

But I wasn’t thinking about snowsport industry data when my 11-year-old son Jake challenged me to a snowboarding duel.

“I bet I could learn it faster than you” was all it took to goad me into signing up for a week of basic lessons on a family ski trip to Les Deux Alpes in France. The competitive spirit clearly doesn’t dim with age, though I’m now wondering if common sense does. As I discovered, pride really does come before a fall.

We picked Les Deux Alpes because it’s an “upside down” resort – the mountain equivalent of a house with its best living space on the first floor. The higher you go towards its 3,600 metre peak, the easier the runs, with the glacier up top, as well as the lower-placed learner slopes, ideal for beginners. Some 60 per cent of its runs are aimed at beginners and intermediates, and its eight sq km off-piste freeride area and snowparks  make it a popular spot for both snowboarders and freestyle skiers.

Jake suspected he would have an immediate advantage over me because he uses a Ripstick – a tricky kind of skateboard with two wheels. He suggested my 20 years plus experience of skiing would give me little advantage as snowboarding is entirely different, with both feet anchored to the same board, using two edges on the snow as opposed to four with skis.

Our snowboarding instructor led me by the hand as I attempted my first turn on the gentlest of inclines. But on the hard-packed snow, finding an edge seemed impossible and tilting the board to make a turn with both feet anchored together felt unwieldy and unnatural.

Jake seemed to make more progress, as he was already used to the skateboarder stance and sideways positioning down the slope. The instructor seemed impressed.

“He already looks quite good,” she said admiringly and, within an hour, he was taking a button lift to the top of the slope and comfortably making turns, albeit slowly.

Meanwhile, I was struggling to even find my balance, cursing every time I landed on my bum, or yelling with pain as I propelled myself yet again face forward onto my wrists.

“Don’t break your fall with your hands or you will break your wrist,” chastised the instructor. “Try not to look so tense, and relax a bit more.”

I muttered to myself and watched enviously as my fellow skiers bombed merrily down a nearby red run. That was where I wanted to be, carving gracefully or nailing some steep moguls – maybe attempting the odd jump. I am a reasonably good off piste skier, capable of completing the more challenging black runs, but now ­­I was in terror of a baby slope – and I was starting halfway down to make it even easier.

I felt I couldn’t stop, couldn’t turn, and even walking with one foot beside my board felt cumbersome.

After two hours I felt more tired than I have ever felt on skis. Conversely, there was no stopping Jake, who was taking lift after lift to the top and weaving among other boarders.

My right knee (injured years earlier in a skiing accident) was throbbing from the twisting motion of boarding and I decided this lesson would be my last, fearful of jeopardising future skiing trips.

Slightly ashamed, I returned to my two beloved planks, comforted for once by the hard clasp of tight-fitting ski boots and the thought that at least I could show my enthusiastic nine-year-old daughter Eloise around the slopes on skis.

Jake on the other hand claimed we had made a £5 wager and persisted with boarding the rest of the week, even progressing to the harder red slopes and reaching snowboarder nirvana – the powder.

I asked him nervously: “Are you going to swap then – to snowboarding full time?”

“I dunno, Dad. I like them both,” he replied, as I began to feel the pounds disappearing from my bank account. “I like everything about boarding – the cool board, the baggy clothing, the comfortable soft boots and the way you can do 360s and jumps. But skiing is good too and I think maybe you can go faster on skis but deep powder on a board would be amazing. I think I will do both.”

As I handed over the €5 wager (at least I can still get conversion rates past him), I calculated all the money I would have spent on ski lessons, only for him to turn to boarding and start asking for more.

Nine weeks of ski lessons in as many years, at around €250 a week, comes to €2,250 and now I’d have to contemplate snowboard tutorials, plus the stylish Burton snowboard gear he’d fallen in love with.

Maybe some statistics would help sway him. “Did I tell you about this study I saw recently, that said skiers were five times happier than boarders?” I said hopefully.

“Yeah, but they probably just asked older people like you who REALLY love skiing because they can’t board,” he replied. Maybe he’s got a point. I’ll leave it to the youngsters.

LATE DEALS
FOR HALF TERM
IT’S NOT too late to take advantage of great snow in Europe. Although it’s harder to bag a half term bargain at late notice (many operators sell out), there are still some relatively low-priced deals, especially if you are willing to drive to the Alps.

ALPINE ELEMENTS
alpineelements.co.uk has flight-inclusive and catered holidays flying from Gatwick on 16 February to Morzine in France for £799pp  and Hotel Montana in La Tania, France for £999pp.

DIRECTSKI.COM
Directski.com has a week’s stay at the 3* Residence Les Ravines in the top resort of Meribel for £849 per person, based on four sharing, including return flights from London Gatwick departing on 15 February, accommodation in a studio apartment and transfers.
directski.com

CLUB MED
Clubmed.co.uk has all inclusive trips to Serre Chevalier in the French Alps or Wengen in Switzerland, costing £2,139 or £2,179 per adult and £1,895 per child, departing from Gatwick 16 February. Children under four stay free and packages include return flights and transfers, childcare and kids’ clubs from ages 4-17, lift passes and ski and snowboard lessons.

VIP SKI
VIP-chalets.com has a luxury chalet in Morzine costing £1,999pp. The holiday includes flights on 16 February and a stay at the Valdez Suite (vip-chalets.com). Or you can arrange your own transport and spend the week being catered for at the Hotel Montjola in St Anton, Austria, for £1,499pp (down £420pp).

SOMETHING FOR THE WEEKEND: THE BEST LUXURY SKI CHALETS

CHALET PETITE MARMOTTE | French Alps
This charming chalet from Abercrombie & Kent is the perfect complement to a winter wedding. Set quite literally on the slopes in one of the best ski resorts in the French Alps, this converted hay store has been lovingly redesigned by Courchevel's premiere architect and is ideal for couples.
£2,565 B&B basis (with 25 per cent discount), www.akvillas.com

SAN LORENZO MOUNTAIN LODGE | Italian Alps
Quite simply one of the most unique properties in Europe. Lovingly restored by its passionate owners, San Lorenzo Mountain Lodge is on a 42 acre private estate nestled 1,200m up high. It offers views over three valleys, hilltop village forts and has its own, private 19-hole golf course.
From £17,955 per week fully hosted, www.akvillas.com

While you’re in Les Deux Alpes make sure you…
■ Stay at the Hotel La Brunerie close to the ticket office in Les Deux Alpes. Crystal Ski (crystalski.co.uk, 0871 231 2256) offers a week’s half board at the hotel from £589 per person including flights from Gatwick (direct flights from major UK airports also available) and transfers departing on 22 February.

■ Invest in great kid’s gear, even if they’re beginners. Try the Burton Clash snowboard (£270), which is tailor-made for learners snowandrock.com, Boy’s Raider jacket (£75),  and Exile cargo snowboard trousers both at gb.burton.com

■ Visit the outdoor pool and ice rink. They are right next to the bottom of the slope, so you can see the skiers while you swim or skate, and vice versa. Tickets are free with a six-day lift pass.

■ Take part in Freeride Attitude, a free lesson every Tuesday teaching mountain safety and use of DVA (avalanche victim detector), or First Tracks, where you can spend €12 to have breakfast up the mountain and be the first to ski down.