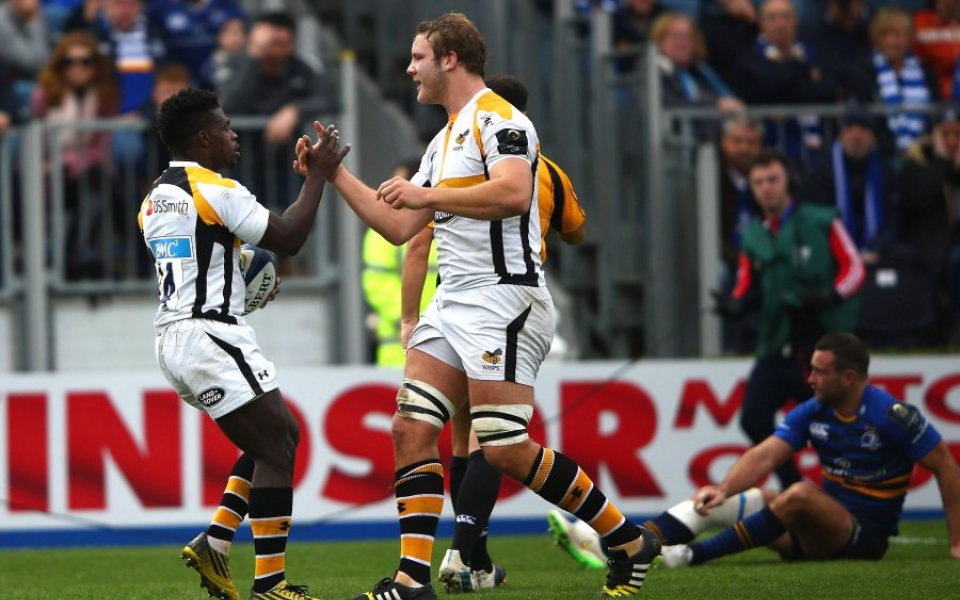 A try from wing Christian Wade together with two penalties from fly-half Ruaridh Jackson and one from centre Elliot Daly gave Wasps a 16-6 interval lead, as Leinster responded through Jonathan Sexton.

Scrum-half Joe Simpson touched down after half time to give Wasps a 17-point lead, while a late third try from full-back Charles Piutau consigned Leinster to their heaviest European reverse for eight years.

The loss was only the third time Leinster had suffered defeat in 15 European pool matches, and the result sends Wasps to the summit of Pool Five after the game between holders Toulon and Bath was postponed following Friday’s terrorist attacks in Paris.

“I’ve been here a few years now and that’s up there with the best, if not the best, win I’ve been in,” said England lock Launchbury who has been at the club for five years. “We had the confidence to come here and play and you saw that in large parts.

“We’ve been through some tough times but when I signed I could see the vision of the club and I’ve believed in it for a long time. Hopefully, if we keep these sort of results going, we’ll start to get noticed.”

Jackson and Sexton had traded two penalties by the time England prospect Daly successfully converted a 50-yard kick to hand Wasps a 9-6 lead, and the first try of the game arrived shortly before the half hour mark.

Simpson dotted down under the posts after a barnstorming run from wing Frank Halai, as Jackson added a further penalty and European debutant Piutau touched down late on following a surge from replacement Sailosi Tagicakibau.

Coventry-based Wasps host Toulon at the Ricoh Arena next week before facing Bath in another another home European Champions Cup showdown on 13 December.