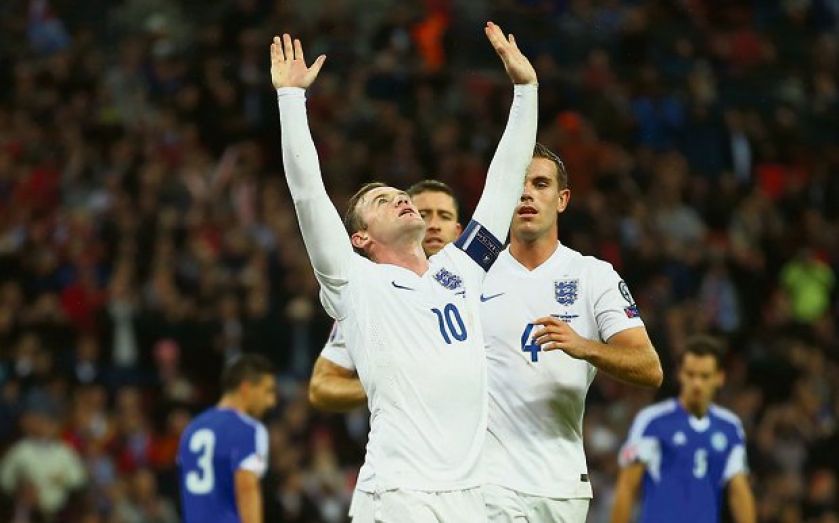 SATISFIED England manager Roy Hodgson played down the importance of breaking goalscoring records last night after his team maintained their 100 per cent start to Euro 2016 qualifying with the most perfunctory of thrashings.

Almost two years to the day since Wayne Rooney and Danny Welbeck netted in a 5-0 defeat of San Marino at Wembley, history repeated itself, with Phil Jagielka, Andros Townsend and an own goal also helping England to top spot in Group E.

Neither England nor Rooney – now seven behind Sir Bobby Charlton’s 49 in the national team’s all-time list – plundered the landslide they fancied, yet Hodgson declared himself content going into Sunday’s next fixture in Estonia.

“You’d have to ask him, but I’m more than happy with him,” said Hodgson of Rooney, who was initially awarded the fifth goal but will surely have it chalked off his tally. “I don’t think it [the record] will prey on his mind. He’s 28, we’d like to think he’s got a good few years left in him yet, so there are plenty of games. I don’t think I should be putting pressure on him to reach targets early. I’m sure he’ll get there. The important thing for me is that he keeps playing well, keeps doing a good job for the team and working as hard as he did tonight.

“It’s an important job done, we’ve got our points from this game and now we can concentrate on our next game in Estonia, and we have very little preparation time, of course.”

Despite tentative plans spurred by flagging attendances to take England on the road, more than 55,000 – or 23,000 more than San Marino’s population -– shuffled to Wembley for this mis-match between football aristocrats and amateurs.

San Marino arrived joint bottom of Fifa’s world rankings and having shipped 13 goals in their last two meetings with England, yet even still the home side looked excessively nonchalant, despite Hodgson sticking with the attacking trident of Rooney, Welbeck and Raheem Sterling

Dinked passes were easily repelled and telegraphed through-balls intercepted by the visitors, and it was therefore little surprise that it took a blend of set-piece and Sammarinese error to open the scoring on 25 minutes.

A one-touch move involving left-back Kieran Gibbs and Welbeck which saw midfielder Jordan Henderson’s shot blocked aside, fluency was still eluding England, who needed a penalty to double their advantage.

Moments before half-time, 38-year-old San Marino striker Andy Selva was penalised for a high boot into Rooney’s face, and the captain located the top-right corner from 12 yards.

Alex Oxlade-Chamberlain, on for Sterling at half-time, made the third for Welbeck shortly after the restart, charging down a clearance and cutting back for his Arsenal colleague to guide home at the near post.

Fellow substitute Townsend added to the scoreline, withthe Tottenham winger cutting in from the right and firing into the bottom right corner from 20 yards.

Rooney fashioned the fifth 13 minutes from time when he beat the offside trap and defender Alessandro Delle Valle, who also scored an own goal when the teams met last year, diverted the cross into his own net.

HOW DID THEY FARE? ENGLAND PLAYER RATINGS