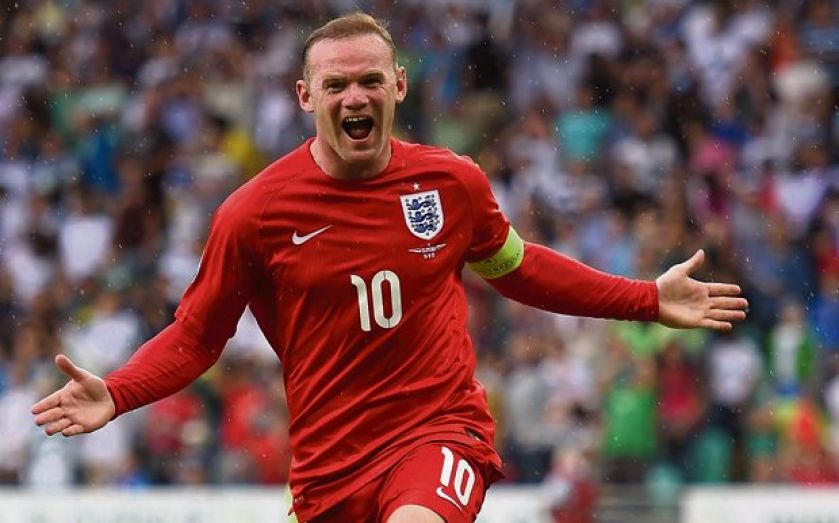 Rooney endured a series of missed opportunities but a late winner moved him to within a solitary strike of Sir Bobby Charlton’s all-time England goalscoring record of 49, moments after substitute Nejc Pecnik had levelled for the hosts.

The Three Lions had trailed at the break after a defensive blip allowed veteran frontman Milivoje Novakovic to open the scoring, while Arsenal midfielder Jack Wilshere turned the game in England’s favour with two stunning strikes in the second period.

Rooney assumed the status of match-winner, shortly after keeping his composure despite being floored by a flailing arm from Slovenian defender Bostjan Cesar, as England remained top of Group E and six points clear of second-placed Switzerland.

“Wayne Rooney’s performance said a lot about him as a man,” said Hodgson, whose England team are the first to go an entire season unbeaten for 24 years.

“He took a nasty blow from an elbow that could have decked many a player and could have caused him to lose his discipline but he was up to concentrate on his job and his role for the team.

“One or two chances had gone begging but he got the chance for the winner and put it away with aplomb. It shows we can rely on that man.”

Slovenia took the lead on 37 minutes when England’s failed offside trap allowed Novakovic, who plays his club football for Nagoya Grampus in Japan, to race through and slot past keeper Joe Hart. Hodgson replied by hauling off defender Phil Jones at the break and replacing him with Liverpool’s Adam Lallana in a move which saw Anfield team-mate Jordan Henderson adopt an unaccustomed right-back role.

England equalised 12 minutes after the re-start. Lallana’s jinking run ended with the ball falling to Wilshere, who lashed a ferocious effort from the edge of the penalty area beyond Inter Milan stopper Samir Handanovic for his maiden international strike.

But if Wilshere’s first goal was impressive, his second was magnificent. A slick counter-attack involving Andros Townsend, Henderson and Lallana ended with the 23-year-old flashing a stinging and unstoppable shot into the top corner.

England were stunned when Pecnik, who had a nondescript spell with Sheffield Wednesday during the 2012-13 season, headed Slovenia level, only for Rooney to shatter hopes of a famous point by nonchalantly firing home with four minutes remaining.