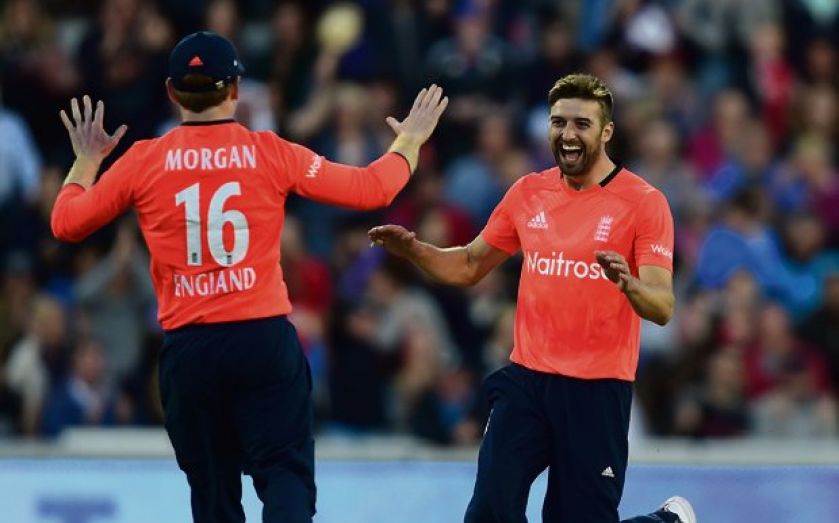 Skipper Eoin Morgan admits he is staggered by England’s one-day progress since their dismal World Cup exit after their limited-overs revolution continued with a crushing 56-run T20 victory over New Zealand at Old Trafford last night.
New Zealand were looking ominous at 89-2 before England rediscovered their poise in the field to dismiss the Black Caps for just 135 with more than three overs remaining, as seamers David Willey and Mark Wood claimed three wickets apiece.
Read more: England’s one-day revival can stoke Ashes bid, insists Billings
The hosts had earlier posted 191-7 from their 20 overs with the prolific Joe Root top-scoring with 68, while openers Jason Roy and Alex Hales, Sam Billings and all-rounder Ben Stokes all notched scores in the twenties.
While it is difficult to pinpoint the exact reasons behind England’s transformation since their humiliating World Cup demise just three months ago, Morgan insists his side’s performance levels are on an upward trajectory with plenty of scope for further improvement.
“This felt a million miles away back then because we were so far off the mark at the World Cup. Coming home we thought we had a lot of hard work to do and a lot of hard lessons to learn but things have turned around pretty quickly,” said Morgan.
“Credit must go to [caretaker boss] Paul Farbrace, the backroom staff and everybody within the squad who have bought into everything we want to be about as a side and the mindset we want to set.
“With the bat, we have continued to churn out runs at a solid rate, which we probably haven’t done in the past. The ball is a little bit different, we need to keep growing our skills as we go along but as we continue to win games we’ll learn a lot more.
“The average age of the group is between 24 and 25 and down the line it makes things very, very exciting and we probably haven’t seen the best of our squad yet.”
Root’s knock, his second half-century in 10 T20 internationals, was plundered off 46 balls and underpinned the England innings, which had been ignited by opener Jason Roy clubbing two sixes on his way to a quick-fire 23.
Hales chipped in with 27 while later cameos from Billings and Stokes, after middle-order duo Morgan and Jonny Bairstow had stalled, helped propel England to a hefty total.
The early wicket of opener Martin Guptill from new-ball exponent Willey acted as a mere distraction for New Zealand as the tourists started their reply at a blistering pace, thanks to captain Brendon McCullum’s powerful 15-ball 35.
One-day man of the series Kane Williamson continued his majestic form with a top score of 57, although Ross Taylor was the only other batsman to reach double figures.
New Zealand’s chances were all but extinguished when Williamson was run out superbly by Willey fielding in the covers, while the tourists were dogged by two major collapses during their innings and surrendered their final five wickets for only four runs.