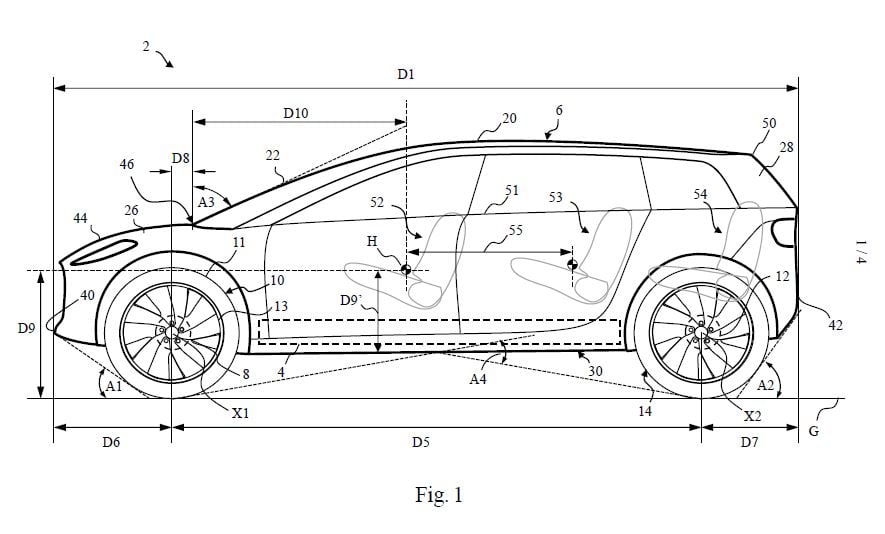 The patents for Dyson’s first electric vehicle have been made public, providing the first glimpse of the car that the UK-based company hope will compete with the likes of Tesla.

Dyson filed the patents 18 months ago after launching the £2bn project in 2017, saying the vehicle will differ significantly from other cars on the market in its design.

In a letter sent out to staff at the company, James Dyson said the first prototype vehicles will be ready for testing next month in its Wiltshire facility.

“The vehicle will include fundamentally new technologies and make some inventive leaps,” he said, suggesting that the car will “differ from the status quo” by not using “electric propulsion systems”.

Dyson said the car could feature a shallow windscreen angle to improve its aerodynamics. (Source: Dyson)

The patents show a car with much larger wheels than a normal car, which Dyson said provides “a low rolling resistance and high ground clearance,” making “a vehicle suited to city life and rough terrain”.

They also feature “a reclined seating position” for the driver, “which would enable a low cabin height and a shallow windscreen angle,” Dyson said.

However, Dyson highlighted that “we do not always use patents or make products based on patents that we have filed”.

In October last year, Dyson made the decision to produce his company's first electric car in Singapore, rather than in its factories in Britain.

The company said that it does not always follow the patents it files, and that people would have to wait to see more details. (Source: Dyson)

This drew criticism from some quarters after the inventor’s support for Brexit on the basis of its potential to free the shackles on UK industry.

Dyson, famous for making vacuum cleaners and hand dryers, said the project would make us of “our in-house research, across multiple core technologies including air treatment, purification, heating and cooling”.

Read more: Dyson to move its business headquarters to Singapore

Dyson’s letter said “we are on track to launch in 2021,” and said “people will have to wait a while longer to see the details”.