The International Labour Organisation measure of unemployment includes jobless people who want to work, are available to work, and are actively seeking employment.

The inactivity rate was 22.5 per cent, up 0.2 percentage points from the previous quarter.

But the most surprising news came frome the drop in number of people claiming jobseeker’s allowance. The figure fell by 21,200 in June, against expectations of a fall of 8,000 following the previous month’s drop of 8,500. Some 4.4 per cent of the population now claim jobseeker's allowance, down 0.4 percentage points from a year earlier. 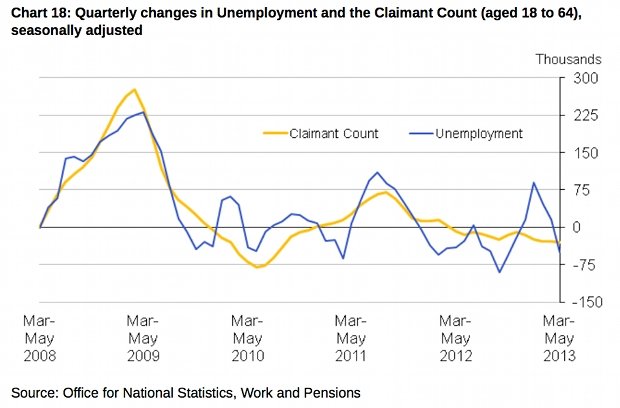 In the chancellor's latest spending round, he announced a number of significant reforms to the financial support for people looking for work, including requirements for upfront work searching, weekly rather than fortnightly visits to jobcentres, a satisfactory level of spoken English, and – most controversially – the introduction of a seven day waiting period.

But with growing private sector employment comes more hours worked, with average weekly hours up six minutes to 32.0 hours in the three months to May.

In May 2013, average total pay was £476 per week, dropping to £446 per week not including bonuses. In the three months to May, total pay rose by 1.7 per cent while regular pay was up one per cent.