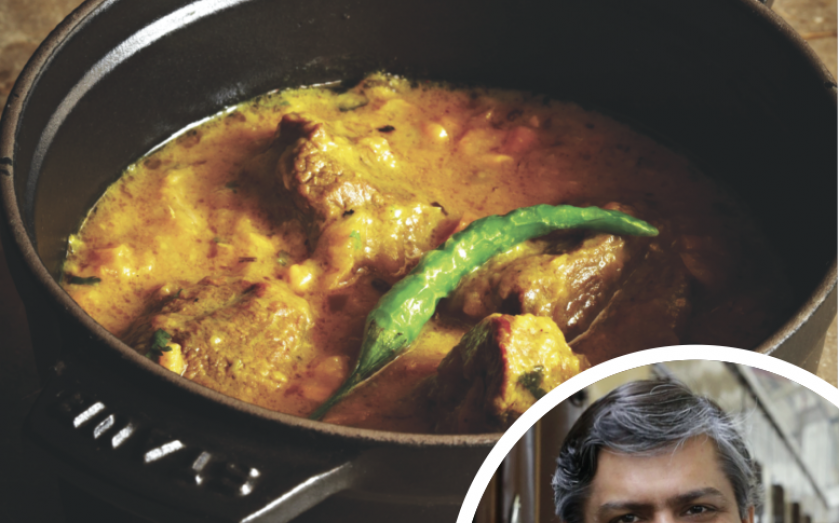 I’ve been executive chef with the Cinnamon Group since 2001. That was at the start of the wave of modern Indian cuisine in Britain. The Cinnamon Club in Westminster was the first restaurant in the group to open about 14 years ago and it’s a temple of gastronomy. It’s very close to the House of Commons so it’s popular with many Members of Parliament.

Cinnamon Kitchen in Devonshire Square in the City is younger and funkier. Cinnamon Soho is the most accessible of the restaurants; it’s the sort of place you can have a few small dishes before you go out. The group has something for everyone, whether you want to go for high chai, a snack before you go out, or a three course meal. But there’s an ethos of creativity and making the best of quality seasonal produce that unites them all.

Thee lamb and sweetcorn curry is one of my favourite dishes when it’s on our menu. Out of all the curries we make, that’s probably the one I would make at home. It’s popular because it’s quite familiar, but the lamb and sweetcorn combination is unusual at the same time. It’s a thing of beauty because of its simplicity.

The traditional way to make it is to make an onion paste, because when you’re cooking for 10 to 12 people as you would be in an Indian family, that’s a lot of onions to chop. If you’re just making it at home, make sure you don’t burn the onions and it’s very straightforward from there. We’re evolving contemporary Indian cuisine and pushing boundaries but, at the same time, I think we know when to leave things alone because they work well.

In the UK, you’ve got the most beautiful Scottish salmon, the best in the world. In India, fish and mustard is a popular combination, while the Scandinavians also use a lot of dill. So we made a salmon with mustard and dill that’s cooked at a fierce heat in a tandoor. It’s charred on the outside but juicy on the inside. We’re just joining the dots between different cuisines to make the best out of the produce we have.

The most common mistake people make when they’re making curry at home is thinking they have to make them really spicy. That couldn’t be further from the truth. They also start cooking without having all the ingredients so they end up adding the wrong things and it’s not the same. People try a recipe for the first time and expect it to work. Cooking curry well requires practice. It’s like Bruce Lee – he practised one move 100 times when everyone else was only doing it 10 times so he could get it right and be the master.

Method
• To start making the curry heat the ghee to smoking point in a heavy-based pan and add the cloves, cardamom pods and bay leaves. When they crackle, add the onions and cook on a medium heat until golden.
• Add the green chillies, salt, ground coriander, cumin and turmeric and stir for
• minute. Stir in the garlic paste and continue cooking for 1–2 minutes.
• Now add the lamb and cook, moving it around on a high heat, for 4–5 minutes, until lightly browned all over. Stir in three-quarters of the sweetcorn kernels and gradually add the yoghurt, stirring well after each spoonful. If you add it too quickly, it will split and make the curry grainy.
• Once yoghurt is incorporated, continue stirring and allow the mixture to come to the boil.
Add the lamb stock, reduce the heat and simmer, uncovered, for about 30 minutes, stirring occasionally, until the sweetcorn is creamy and soft and the sauce has thickened.
• Add the ginger, fresh coriander and the remaining sweetcorn kernels, pour in a little more lamb stock or water, if required, and continue simmering over a low heat for 10 minutes. Check the seasoning and finish by squeezing in the lemon juice.