Many factors move stock markets but the strength of a country’s currency can have a surprisingly large bearing.

Several high profile events have underlined this in the past year – most notably Brexit and Donald Trump’s US election win.

The way currencies affect stock markets are different in each country.

Rising currencies may serve to help share prices in one country and hinder them in another. It largely depends on where companies in a country make their money – home or abroad?

We look at three examples in the US, UK and Asia.

Donald Trump’s election as US president caught some investors by surprise, but after an initial wobble US stocks rallied.

The S&P 500, the benchmark US share index, rose 10% to new all-time highs in the month following Trump's election on 9 November.

There are many factors that can influence stock markets, but the strength of the US dollar, which gained 3% during the same period, was a key driver. 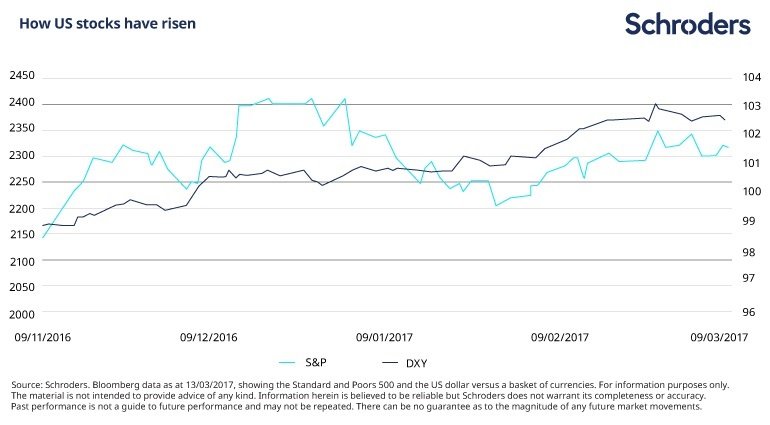 Trump’s election on the back of “America first” policies, which included encouraging US businesses and consumers to “buy American” and huge infrastructure spending plans, raised inflation expectations and the prospect of interest rates rises.

Higher interest rates can mean higher rates of return and this makes currencies more attractive to investors. Then in turn, a stronger dollar supports the earnings of US companies that generate most of their revenues in the US, providing the currency doesn’t become strong enough to hurt export demand.

Despite some weakness in December 2016 the US dollar has continued to strengthen following Trump’s election.

As the chart below illustrates, more than 70% of the revenues generated by US companies listed on the S&P come from the US. France is next biggest contributor, followed by the UK.

The inner ring illustrates that 99.8% of the companies on the S&P 500 have registered head offices (i.e. they are domiciled) in the US.

The outer ring is the important part. It shows the regions from which S&P 500 companies generate their revenues. All but 29.6% are generated inside the US.

How sterling moves the FTSE 100

In contrast to the S&P 500, the majority of FTSE 100 companies generate their revenues from outside the UK.

So, when the Brexit decision sent sterling tumbling the FTSE 100 rose sharply. In the three months following Brexit, the index rose 10.4%, while the pound fell 12.8% against the dollar. Why is this?

The majority of FTSE 100 companies receive their revenues in foreign currency. This money is worth more when converted back into pounds when sterling is lower. 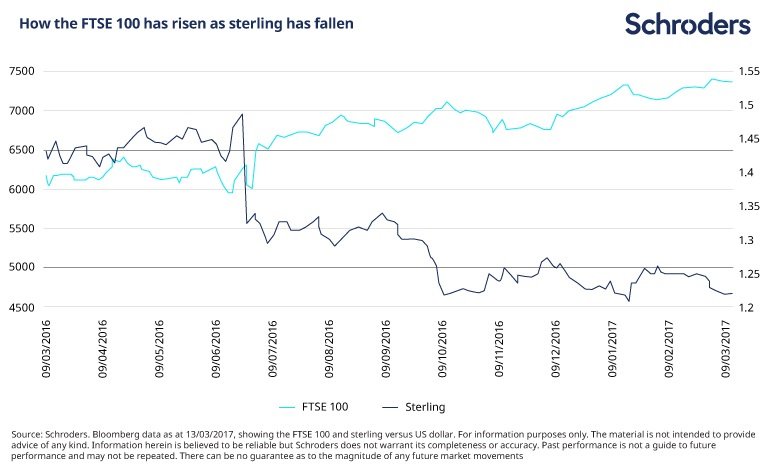 Consider a simplified scenario of currency movement. If the exchange rate was $2 to the pound then every $1,000 of revenue would be worth £500.

However, if sterling weakened and the exchange rate moved to $1.50 to the pound, then every $1,000 of revenue would be worth £667. The outcome is that revenues increased 33% as a result of the fall in sterling.

As the chart below shows, 71% of revenues generated by FTSE 100 companies come from outside the UK.

The strength of sterling against the euro is also important given the large chunks of revenue accounted for by France, Germany, Italy and other eurozone countries.

How the Japanese yen moves the Nikkei 225

Revenues from Nikkei 225 companies are more finely balanced and therefore currency movements tend not to have such a dramatic effect on the stock market. 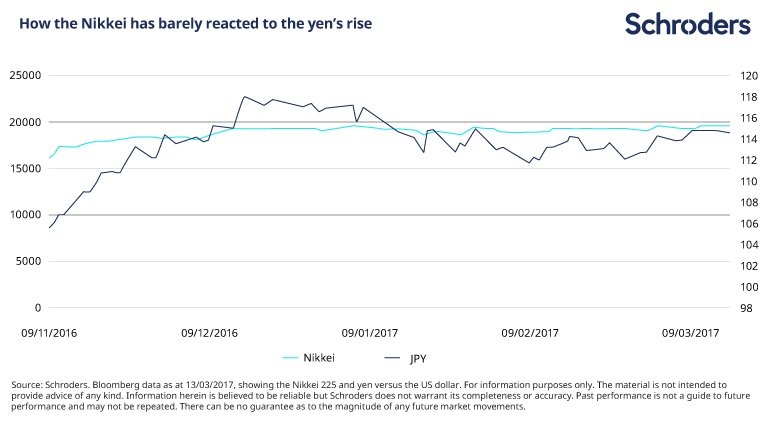 As the chart below shows, 53.2% of revenues generated by Nikkei 225 companies come from inside Japan.

Why revenue exposure is important for diversification

Imagine you are a US investor investing in a company listed on the FTSE 100 to diversify your portfolio away from the US.

It is understandable that you might expect that you are gaining exposure to the UK market, its currency and the benefits of its economy.

But there is a real chance that the company you are investing in could be generating most of its revenues and profits from the US. In reality you would not be diversifying your portfolio at all.

Currency moves are by no means the main reason why stock markets rise and fall but they are important depending on which regions listed companies are exposed to. It is something that investors might consider when building a diversified portfolio.