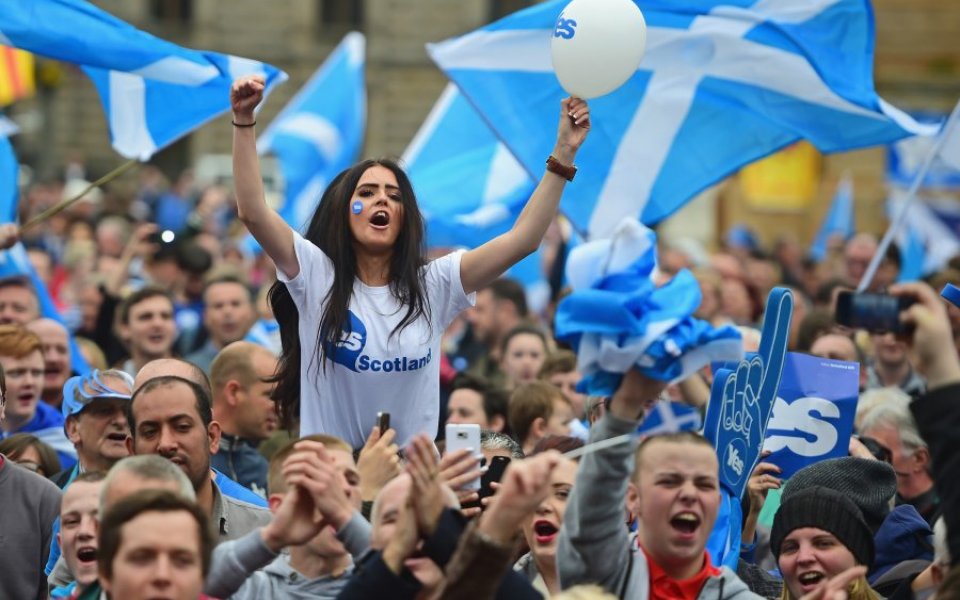 If the polls are to be trusted, Scotland overwhelmingly wants to stay in the European Union while England is growing increasingly uncertain about what it wants to do.

Why does that matter? Because if England takes Scotland out of the EU against its wishes, the move would spark calls for a Scottish independence referendum 2.0, figures from ex-EU chief Herman Van Rompuy to former foreign secretary William Hague and Scottish National Party leader Nicola Sturgeon have already warned.

Of course, Prime Minister David Cameron and his Scottish secretary David Mundell have been unambiguous in their stance that there will be no second referendum. Even a number of high profile backbenchers have told me that Brexit wouldn’t be grounds for another referendum.

But while politicians will stick to their guns, ultimately it’s “both politically and legally unclear” whether Brexit could lead to another independence referendum, says professor Aileen McHarg, who specialises in constitutional law at the University of Strathclyde.

In fact, legally, the question of whether the Scottish parliament has the power to unilaterally legislate for an independence referendum – without the consent of Westminster – was one of the earliest battles of the original referendum, says constitutional law expert Charles Livingstone, partner in the public law and regulatory team at Brodies, who has written extensively on the legal issues that arose during the Scottish independence debate.

At the time, the weight of legal opinion was that the Scottish parliament could not legislate unilaterally.

Ultimately, however, the question was never contested in court, explains professor McHarg, because the issue was resolved when the UK and Scottish governments agreed in the Edinburgh Agreement to confer, via an order under section 30 of the Scotland Act 1998, clear, but temporary (it expired at the end of 2014), power to authorise a referendum on the Scottish parliament.

This is important because both the Edinburgh Agreement and the section 30 order were both carefully worded to leave open the question of whether the consent was in fact necessary, Livingstone adds: “But having gone down the consent route once it would probably be harder for the Scottish government to argue that they did not need to do it again”.

Professor Drew Scott of Edinburgh University puts it in even stronger terms: “Matters relating to the UK constitution are reserved to Westminster, so there is a view a second Scottish independence referendum will also require permission of the UK government.”

But McHarg thinks there would be two options for the Scottish government: to procure legislation from the Scottish parliament to authorise a second referendum, and run the risk that this would be challenged either by the UK government or a member of the public; or, as Livingstone and Scott think likely, seek to negotiate with the UK government a further temporary or permanent transfer of power.

This second option would be dependent on the willingness of the UK government to recognise the legitimacy of the Scottish government’s political mandate.

And that itself is likely to depend on a number of factors, including the size of the gap between the vote in Scotland and in the UK as a whole; what opinion polls are saying about Scottish demand for independence; and ministers’ willingness to respect repeated statements that Scotland may become independent if it chooses to do so, to name but a few.

In essence, these issues may be determined by political factors. As professor Stephen Tierney, who teaches constitutional law at the University of Edinburgh says, the UK government gave its consent in the first referendum “as a matter of political principle that the referendum should be allowed – presumably because the SNP won an overall majority in the preceding Scottish parliament elections, having run in those elections with such a referendum as a manifesto commitment”.

Indeed, he thinks the whole issue is one of political power, and thinks it likely that Brexit would lead to the request of another referendum.

He isn’t alone. Author of Scottish Independence: Legal and Constitutional Issues Jo Murkens agrees, saying the 2014 Referendum was conducted on the basis of continued UK membership of the EU. “It would require a momentous constitutional change to legitimise a second referendum and galvanise public support. It is quite possible that Brexit would be such a game-changing moment.”

At that point it could become difficult for the UK government to resist co-operating in facilitating a referendum.

True enough, if it didn’t and the issue went to court, the “balance of probabilities” suggests the Supreme Court would probably find that the Scottish parliament does not currently have the power to hold a referendum without authorisation from Westminster, Tierney says.

But even in this case, he adds, the SNP would almost certainly run in the next Scottish and UK general elections calling for another referendum, and in this case the political momentum for such a referendum would be at least as strong as it was from 2012-14. “So politically the pressure for a second referendum would be, to my mind, very strong indeed and probably irresistible.”

Still, that doesn’t guarantee a referendum, given the detailed negotiations that would follow Brexit. Indeed, added to the fact it would take time to agree in negotiations between the UK and the EU, there may be many Scots whose decision on independence would turn on the prospect of retaining access to EU markets, and may be content with a free trade agreement, for example.

As Murkens says, “no one currently knows what Brexit is. It could be complete withdrawal or renegotiated membership and the former may be less acceptable to the Scots than the latter,” which could mean less renewed support for independence than expected.

Nevertheless, it wouldn’t be surprising if Brexit led to a significant upsurge in support for Scottish independence, Scott adds, “but how sustainable that upsurge would be, and whether the pro-EU membership case outweighed other questions around independence is, at this stage, anyone’s guess”.