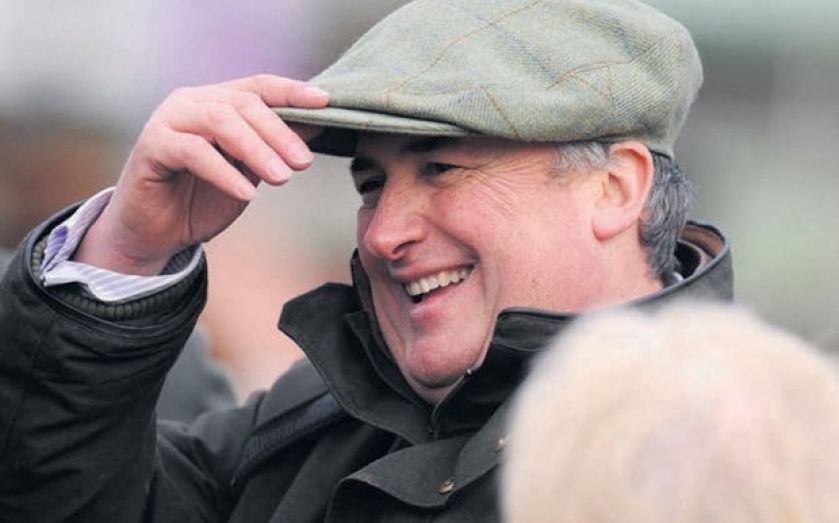 IT HASN’T been the greatest of weeks for Paul Nicholls so far, but he has a number of live chances today and will be disappointed if he isn’t on the scoresheet.

I don’t think he’s going to be waiting long because CALIPTO must have a favourite’s chance in the opening Triumph Hurdle (1.30pm).

Plenty have crabbed the form of his two wins at Newbury and expressed concerns about his ability to handle quicker conditions. However, he has travelled brilliantly through his races and I’m pretty sure he is the best horse in the race.

Guitar Pete is respected, but he was beaten at this track back in November and, although Broughton will love the ground, John Ferguson’s horses just don’t seem to come up the hill.

Tiger Roll is completely unexposed and has a decent shout, while Royal Irish Hussar is interesting but has reportedly had an interrupted preparation.

The Irish have won six of the last seven renewals of the County Hurdle (2.05pm) and, with the likes of Arctic Fire, MINELLA FORU and Flaxen Flare, they have very good chances of making it seven from eight.

AP McCoy has had a number of painful narrow misses at this year’s meeting, but can claim compensation at 10/1 aboard the Edward Harty-trained Minella Foru. Novice hurdlers have landed most of the big valuable handicap hurdlers this season, not to mention both the last two runnings of this race.

At a bigger price, I’ll also be taking the 16/1 about the fellow JP McManus-owned ALAIVAN at the foot of the card. He’s slipped to a low mark, has the useful Maurice Lineman taking weight off and has run well in this race in the past.

Willie Mullins will be hoping to land a clean sweep of novice hurdles in the Albert Bartlett (2.40pm) with Briar Hill. Vautour and Faugheen blitzed their rivals earlier in the week and Briar Hill could easily do the same this afternoon. But he is no value at 5/4 with Paddy Power.

The stable had a similar banker in this race two years ago when Boston Bob was sent off 6/5. He couldn’t get past Brindisi Breeze, though, and I could never bring myself to back anything at 5/4 at the Festival.

In saying this, Briar Hill was one of the most impressive Champion Bumper winners 12 months ago and he is a gutsy horse that loves to battle.

Tom Scudamore broke my heart (and plenty others) when he nailed Champagne Fever on the line in Tuesday’s Arkle and I’m hoping he can get the better of Ruby Walsh again in this race.

I can’t remember seeing a more impressive jumping performance from a novice hurdler than when KINGS PALACE romped to victory here in December. He was brilliant over his hurdles that day and, although the form isn’t that hot, he should be much closer to Briar Hill in the market.

A few weeks ago he was a lot shorter than the current 4/1 with BetBright, who are again offering a £30 risk free bet to all new customers at Cheltenham.

The Foxhunters (4.00pm) looks as wide-open as always and I’m just not sure that hot favourite On The Fringe truly stays this trip. For that reason I’m prepared to take each-way chances on OSCAR DELTA, who unseated his pilot last year on the run-in and former Festival winner BERTIES DREAM. The former can be backed at 10/1 with BetBright, while the latter is available at 16/1 with Star Sports.

David Pipe would dearly love to win the race named after his father (4.40pm), but he only has the one dart this year in Vieux Lion Rouge. He’s unproven on this ground, though, and ran disappointingly in the Bumper last season.

Nicholls won this with the well-handicapped Salubrious last year and CAID DU BERLAIS is an intriguing runner this afternoon. The five-year-old was second to Flaxen Flare in the Fred Winter 12 months ago and is only six pounds higher now.

He was second to Jezki earlier in the season and that form is good enough for me. Harry Derham, Nicholls’ nephew, is in the saddle again and the pair can go close at 10/1 with Star Sports.

The Johnny Henderson Grand Annual Chase (5.15pm) brings the curtain down on the Festival for another year and I will be backing RAYA STAR to set me off on my drive home with a smile on my face.

The eight-year-old is pretty high in the weights, but he has some really strong form, including finishing second to Dodging Bullets here in November. Take the 16/1 with BetBright.

I will also be having a saver on CLARET CLOAK for Emma Lavelle at 10/1 with Paddy Power. The son of Vinnie Roe needs decent ground and he looks fairly handicapped.