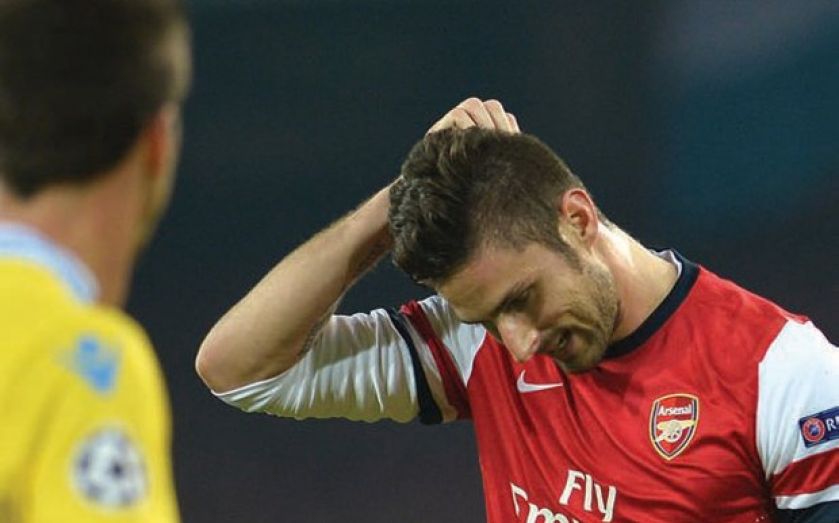 ARSENAL manager Arsene Wenger did his best to look on the bright side after a nervy night ended with his 10-man team being plunged into a nightmare draw for the knockout stage of the Champions League.

Late goals from former Gunners target Gonzalo Higuain and Jose Callejon took Wenger’s men to the brink of a three-goal defeat that would have eliminated them, with a trio of teams level on 12 points.

The Gunners will meet one of holders Bayern Munich, Barcelona, Real Madrid, Atletico Madrid or Paris Saint-Germain. Had they drawn last night they could have faced the likes of Olympiacos or Zenit St Petersburg.

Wenger admitted his players had been torn – “do we attack or do we defend?” – but celebrated extending his long-running record of reaching the next stage and found a silver lining to finishing runner-up.

“Of course to finish second makes the potential draw more difficult,” he said. “In the last four or five years we have had very difficult draws, so maybe this time we will be more lucky. But if you look at the teams who are potentially there, at least we know we will have a difficult draw. We have now qualified for a 14th consecutive year for the last 16 and maybe No14 will bring us a bit of luck. You feel there was room to do better but it could have been worse as well tonight.”

Wenger stayed true to his word and picked his strongest side, minus Aaron Ramsey, yet the knowledge that even defeat would see them through appeared to inhibit the Gunners, who were hesitant.

Though Olivier Giroud tested goalkeeper Rafael from a tight angle early on it was Napoli who consistently threatened, Goran Pandev, Christian Maggio and Pablo Armero drawing saves in the first hour.

The Italians were inches from scoring when Jose Callejon ran clear, turned Laurent Koscielny and fired just wide, but the opening goal was coming and it duly arrived from an inevitable source.

Arsenal’s fruitless pursuit of Higuain caused much consternation among supporters and the Argentinian twisted the knife with a ruthless finish – spinning with one touch, firing low and right with the next.

Nerves grew moments later when Arteta marched off after a second booking and Armero flashed the ball across goal, while in France, Dortmund scored a crucial second.

Callejon escaped Per Mertesacker to lob Wojciech Szczesny and put Napoli within one goal of salvation – and Arsenal the Europa League – but his proved the last kick of the game.