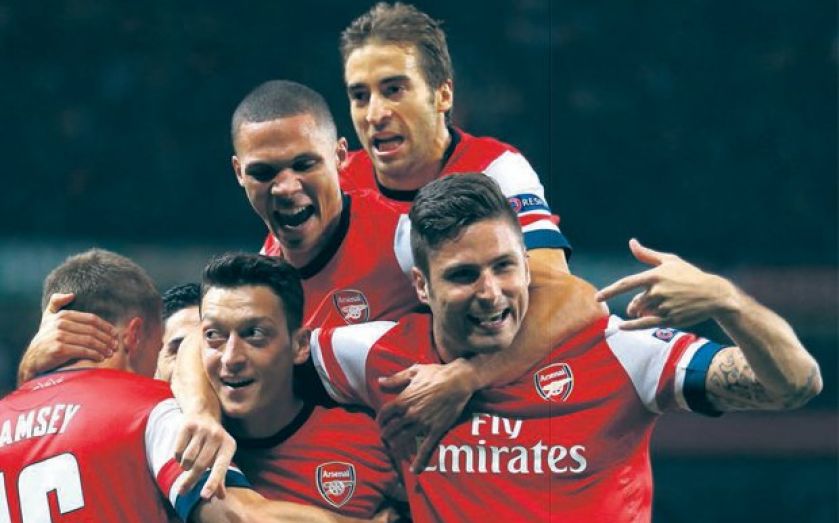 ARSENAL manager Arsene Wenger admitted they were lucky to clinch the deadline-day signing of Mesut Ozil, after the Germany playmaker scored one and set up another in a dazzling victory over Napoli last night.

Ozil’s opener, his first since joining from Real Madrid, was swiftly followed by striker Olivier Giroud’s sixth of the season as the Premier League leaders pulled three points clear at the top of Champions League Group F.

Arsenal’s 10th successive win was also their 19th in 22 games, while the swashbuckling performance had Wenger purring, not least about Ozil.

“He had an outstanding first half where you saw everything you want from a player: individual skill, team play, finishing, final ball. Just sit there and enjoy it,” he said. “I thought he was great in Madrid and we are just lucky to have got him.

“It was a very enjoyable game, with a fantastic first half played with belief, great finishing and great movement.

“We got so much stick at the start of the season that I’m a bit cautious. Of course he gave a lift to everybody around the club, and belief as well, and belief is part of success in football.

“I don’t know when the team last played that well. It’s one of the best halves we have played for a long time.”

An avalanche of early-season wins had buried the fear and discontent that seeped from Emirates Stadium following an opening-day defeat to Aston Villa, though there was still trepidation at the visit of Napoli.

The Italians have turned heads this term but, missing £32m striker Gonzalo Higuain, for whom they gazumped Arsenal, were swept aside in as devastating a period that Wenger’s men have mustered in recent memory.

Ozil’s first in a red shirt after just eight minutes exemplified the spell. Giroud fed the onrushing Aaron Ramsey down the right flank and the Welshman cut back for Ozil to cushion a left-footed, first-time effort inside the far post from 12 yards.

The German has instantly become Arsenal’s star attraction, as much for his £42m fee as his knack of languidly creating goals, and it was the second trait in effect moments later when he danced in from the right and invited Giroud to tap in from close range.