BRITAIN’S recovery is faster than expected and the country should run a budget surplus in 2018-19, the Office for Budget Responsibility (OBR) said yesterday – but it also warned the UK will be held back by weak productivity and poor exports in the years ahead.

Much of the growth has come from households running down savings or borrowing more, the agency said, trends which are not sustainable.

Growth of 1.4 per cent this year is more than double the 0.6 per cent forecast back in March, and next year will see 2.4 per cent growth, above the 1.8 per cent previously predicted. 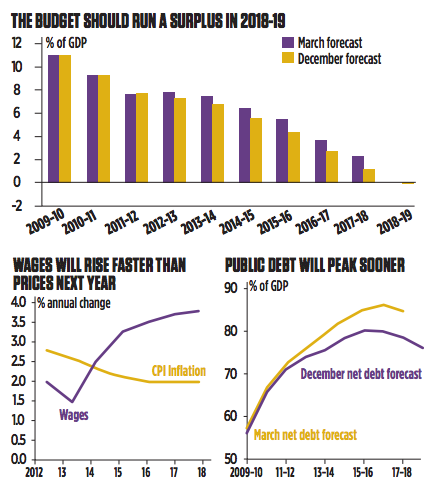 Unemployment will also plunge rapidly, falling to 7.1 per cent next year and seven per cent in 2015. That will hit the Bank of England’s jobs threahold earlier than expected, making the Bank consider raising interest rates.

The unexpected growth spurt means the deficit is set to come in at £111.2bn this year, £8.6bn lower than forecast in March. And the national debt will peak at 80 per cent of GDP in 2015-16, rather than 85.6 per cent of GDP a year later as predicted at the budget.

As long as further spending cuts come in after the next election, the government will run a budget surplus in 2018-19. As part of that the OBR expects total managed expenditure is set to fall to from 43.7 per cent of GDP now to 38.4 per cent in 2018-19, the lowest level since 1948.

However, the speed of expansion cannot be maintained, OBR head Robert Chote warned, as the growth spurt is entirely cyclical rather than structural – based on growing demand, not any increase in underlying economic capacity.

The structural deficit is not falling with the headline number deficit, coming in higher than earlier expected – the structural surplus will be 0.7 per cent in 2017-18, not 0.8 per cent as thought in March, the OBR said.

One key cyclical contributor is soaring stamp duty as more houses are sold and at a higher price – it is set to bring in £16.8bn in 2018-19, up from £6.9bn last year. Inheritance tax revenues will rise from £3.1bn to £5.6bn over the same period.

Traditionally this removal of spare capacity would increase inflationary pressures, but the OBR said the UK has avoided this because the strength of the pound makes imports cheaper.

Inflation is now expected to fall to 2.3 per cent in 2014, one percentage point lower than previously forecast.

However, the strong pound will also contribute to the UK’s weak export performance.