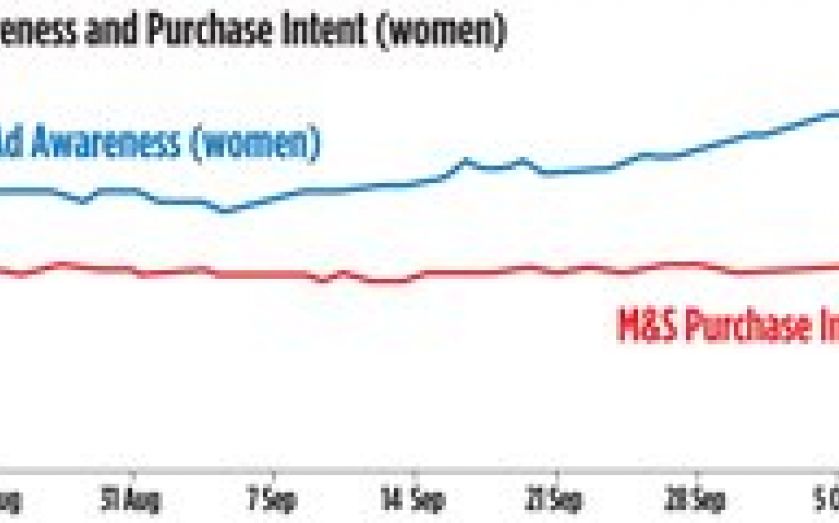 LAST week Marks & Spencer’s general merchandise arm was dealt a blow when a number of respected analysts warned that it is continuing to lose market share in women’s fashion, leading to a fall in its share price. Autumn sales figures won’t be released until next month, but if the naysayers turn out to be correct then it will be the ninth consecutive quarterly fall for the company’s non-food division.To try and turn things around M&S trumpeted a new clothing range at the end of the summer, and launched a high-profile ad campaign featuring such luminaries as Helen Mirren, Tracey Emin and author Monica Ali. Our research shows that the campaign’s target audience is definitely taking notice, but it has not yet made them want to run out and buy Marks & Sparks clobber.Today more than four in ten women have seen an M&S advertisement in the past two weeks, up from 31 per cent when the campaign began. But while ad awareness has increased by ten points, the percentage of women who say they are likely to buy something from M&S has gone up by just two points, to 24 per cent.When we look at the brand over the longer term, however, we see that M&S still leads its competitors in the eyes of consumers. Its overall Index score, a composite of six key image attributes, has held steady over the past year and today stands at a robust 53.3.However, it has declined by seven points since 2011, and rival John Lewis is closing in. The considerable increase in ad awareness shows that the new campaign is reaching its target audience, which is an encouraging sign. Also, M&S’s autumn-winter collection has been widely praised by critics, but several fashion retailers have been affected by a warm autumn that has consumers holding off on buying warmer clothing. The real test will come at Christmas, and until then no one should rule out an M&S comeback. Stephan Shakespeare is the chief executive of YouGov