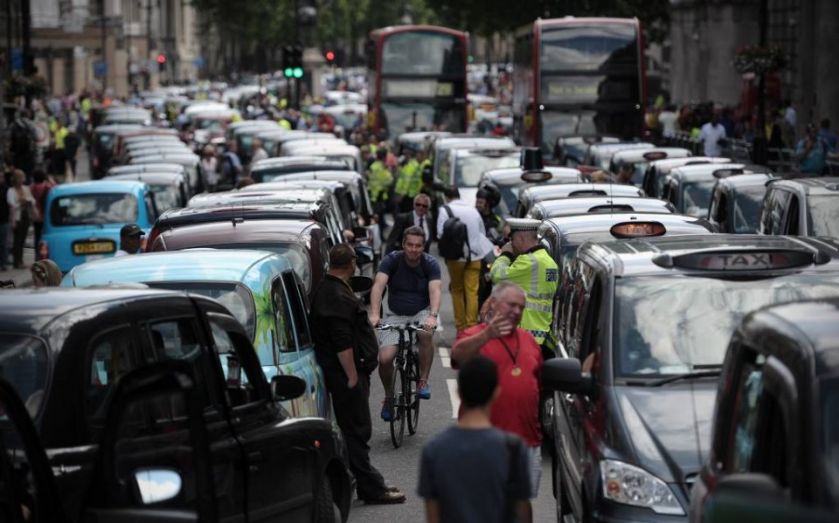 Central London roads were gridlocked this afternoon as the black cab protest caused chaos around Parliament Square, Whitehall, Embankment and Lambeth Palace Road.
Campaigners are directing the protest, scheduled to take place between 2pm and 4pm today, against  Transport for London, which they claim are not doing enough to keep on top of regulation for taxi services such as Uber and minicab operators.
Drivers are targeting the streets around TfL's headquarters so if you are driving on London roads today this is where you need to avoid.
Police have closed off Victoria Street between Parliament Square and Bressenden Place. Already traffic is backing up around that area.
https://twitter.com/TfLTrafficNews/status/603188305568657408
Although TfL is apparently sceptical about the impact, which is not expected to compare with the one held against Uber last year, by 2pm plenty of taxi drivers arrived to take part in the protest, organised by splinter trade organisation United Cabbies Group.
https://twitter.com/AnnaCookson/status/603181984614068224
https://twitter.com/UnitedCabbies/status/603186384527085569
https://twitter.com/chriswrighttt/status/603191387283169280
https://twitter.com/graeme_l_casey/status/603195803285458944
https://twitter.com/JosephPotts3/status/603192334063423488
https://twitter.com/s8mb/status/603195662465896448
https://twitter.com/IanAustinMP/status/603205785599025152
Speaking with City A.M., organiser Len Martin said TfL did not do enough to protect London's black cabs.
“We have a regulator that fails to regulate,” he said.
https://twitter.com/garylong69/status/603118588363407360
https://twitter.com/taxidal/status/603105879848779776
A London Assembly report last year slammed TfL for its "woefully inadequate" cab regulation.
But TfL is fighting fire with…  a press release, today publishing "early results" of Operation Neon, which was launched to clamp down on illegal minicab activity.
In the first five evenings of the high-visibility, multi-agency operation, 331 private hire drivers have been reported for failing to comply with regulations.
Among those reported are eight drivers for plying for hire offences; 30 for parking on taxi ranks and 73 for parking offences.
Around 600 vehicles have also been moved on from outside clubs and late-night venues.
As well as TfL, the Metropolitan Police and Westminster City Council parking attendants are contributing to Operation Neon.
Garrett Emmerson, TfL's chief operating officer for surface transport, said: `We are determined to protect the livelihoods of all legitimate taxi and private hire drivers through robust enforcement action.
"Following engagement with the main trade associations (The Licensed Taxi Drivers Association, the London Cab Drivers Club and Unite), we will continue to be relentless in enforcing the law through action such as Operation Neon to protect the legitimate trade, improve public safety, promote high levels of compliance and tackle illegality."