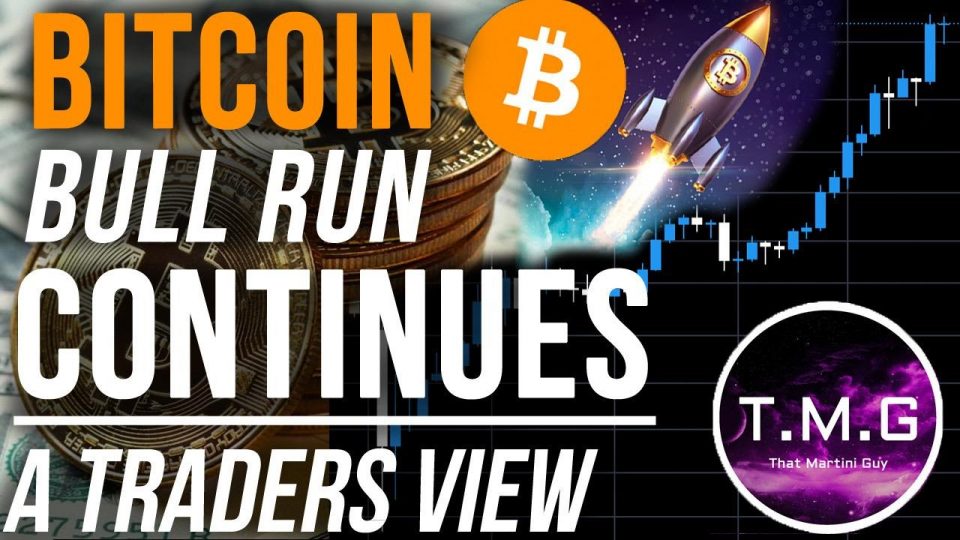 The price of Bitcoin has not stopped rising astronomically since I started writing these articles. But really, the price action over the past month has come as a surprise. In the last article I discussed the fact that Bitcoin is in the process of completing its stock to flow and well, we are nearly halfway complete with the target for Bitcoin’s price being $100,000.

Previously there was a lot of speculation about regulation in the crypto space stifling price action and innovation, but since the USA lost the plot earlier this week, much of this chatter has disappeared, perhaps to resume at some point in the future or perhaps not to, as the next US Government will no doubt just cancel everything the existing administration had going and crack on with their own plan.

So what comes next for Bitcoin?

As it sits at the moment the price of Bitcoin has been rising with every recent dip being bought up in seconds. The price of bitcoin has surpassed $41,000 just as I am writing today’s article with no end in sight to this growth spurt. The natural assumption is that Bitcoin must correct at some point, and it will, but just not yet. It is important to read the market conditions; currently the market conditions are a perfect storm and they probably will be for the entirety of 2021.

2021 promises to be a year of excess money printing, US dollar inflation and therefore devaluation against deflationary assets like Bitcoin. Bitcoin is currently sucking liquidity from gold markets and banks are loving this as Peter Schiff so eloquently wrote in a tweet earlier this month! Unfortunately for Peter, he cannot grasp the concept of being wrong and so he continues to misinform his following about Bitcoin. This is due to his huge position in the Gold markets that has not performed as well as Bitcoin due to the inflationary nature of Gold as well as the excitement of Bitcoin attracting young investors away from a boring yellow rock…

What is pushing Bitcoins price up so quickly?

To put it simply, the masses are arriving. Millions of people are flooding into the cryptocurrency space, my YouTube analytics reflect this in addition to Instagram and Twitter – every single metric at the moment is booming. The best thing about this is that there is no reason it should slow down. Bull markets in cryptocurrency historically last 3 years and this one began about 9 months ago, so, if history is to repeat itself, in theory this adoption phase could push the price of Bitcoin well beyond $100,000 in the coming years.

In the previous article I referenced retail consumer interest in Bitcoin was rising. It is still rising. There are over 7 billion people in the world, and not even 1% of them hold Bitcoin, so it would be silly to think that this is the top for Bitcoin.

Is it still a good time to buy Bitcoin?

Yes. There is never a bad time to buy Bitcoin. The goal of holding Bitcoin is not to make money, the goal is to preserve value against heavily inflating currencies. In a world run by halfwits, Bitcoin is a great way for many people to preserve their value. This financial year Americans will suffer over 10% inflation; next year will be no different. Our incompetent government here in the UK is so dramatically underfunded in its infrastructure – why the hell would you back their currency when they continue to print money and spend it on things nobody asked for? All they do is increase the wealth divide.

Bitcoin is a fair and level playing field for a global internet currency. You, me and a bloke in a rainforest in Thailand are all equal in this system and we all benefit from deflation. We are not victims of inflation. I do not participate much in the traditional economy because I genuinely believe it is a broken system, and so I store very little value in pounds. In the 4 years since I adopted this strategy, my portfolio has outperformed every single major financial institution. People can say the bubble will pop, and it will, but then more people will come, and they will blow it back up even bigger next time. Please reference the Gartner Hype Cycle.

The bubble pop will happen again. But it will not be half as bad as previously due to institutions continually buying Bitcoin at the moment. I expect where the price of Bitcoin is now to be near the bottom of the next bear market. It is important to signify the difference between a bear market and a pullback. Bitcoin has 20-30% pullbacks in bull markets on a regular basis. Dips in bull markets are for buying and while there is so much interest we are still bullish. When all metrics start to decline that will signify the start of the bear market.

Altcoin season is coming very soon. Ethereum has been warming up more and more, currently trading above $1200. I expect to see it much higher than that in the coming months. Ethereum in terms of its Bitcoin value is dramatically depreciated and whenever Bitcoin next enters into a period of accumulation, we will really start too see Altcoin season take off and Ethereum’s price will reflect this also!

The Market looks amazing at the moment – it is clear Bitcoin is in a state of euphoria. Enjoy it! The euphoria can last a long time in the crypto space, people thought it would dump at $30k, or at $40k, and we have had a few minor pullbacks but every dip is bought with such volume that I just cannot go near being bearish at the moment. In my opinion, that would be the wrong side to pick. Save that bearish mentality for when Bitcoin shows any sign of a bearish reversal!