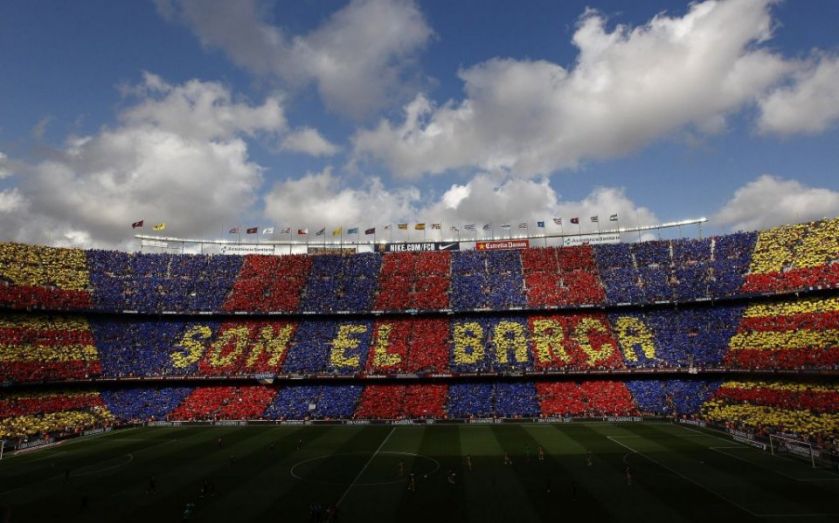 Barcelona’s famous Camp Nou stadium could have its name changed to “Qatar Airways Camp Nou” as part of a future sponsorship deal.
The Catalan club already sport the airline’s name across their shirts as part of a sponsorship with Qatar Sports Investments worth €165m (£108m) over five years.
However Qatar Airways could be looking to further its presence at Barcelona with any future contract according to its chief executive Akbar al-Baker who commented:

Everything is a possibility for our company, we’re open to surprises and one of these could be connected to the name of Camp Nou. Qatar Airways and Barcelona have the same values. It is our possible that our name is added to Camp Nou.

Last month it was revealed that Barcelona’s arch-rivals Real Madrid could also be giving their stadium a Middle Eastern makeover by renaming it the “Abu Dhabi Santiago Bernabeu”.
Real are sponsored by the United Arab Emirates airline Emirates and could sell naming rights to the stadium in order to finance its expansion from a capacity of 81,000 to 90,000.
However Barcelona, whose motto translates as “more than a club”, are also considering cutting ties with the gulf state due to a change in the “social and political situation”.
Club president Josep Maria Bartomeu told Catalan radio station:

Qatar is an issue where we are looking at other options. Their contract finishes in 2016 and then it could be them or another.
We’re not sensitive to the current situation in Qatar, because now there are social and political issues that there weren’t in 2010 and we’re sensitive to them.
As a sponsor we’re happy and they make a contribution to the club, but we are also looking at other options.