The members of the Bank of England's interest-rate setting committee have voted to hold policy.

Interest rates will stay put at 0.5 per cent, while asset purchases will be maintained at current levels.

Despite the (widely expected) inaction from the Monetary Policy Commitee, there are rumblings that the Bank of England could now be first of the big four central banks to pull the trigger on a rate hike

Mark Holman, chief executive of TwentyFour Asset Management, is one now one such market watcher taking that view, as each "strong data release is potentially more meaningful in assessing the timing of the first hike".

None more so than the sharp increases we've been seeing in UK house prices, says Holman. As analysts warn that the housing sector could show signs of overheating, pressure will begin to pile on Carney to do something about soaring prices. That could take the form of macroprudential policy to cool the sector off, or a more general interest rate hike.

The Bank of Japan and European Central Bank were never going to be in the race to hike, but dovish signals from Federal Reserve chair Janet Yellen have convinced some corners that Bank of England governor Mark Carney will now be first to make the move.

Now with less than a year until the next UK election, those at the Bank are approaching politically sensitive territory. If they want to hike, they'll have to bear in mind the risks of being tarred with accusations of bias. Rightly or wrongly, a hike before the election may see some view the MPC as anti-government, while a hike shortly after might be read the other way.

In a global research report released this week, Bank of America Merrill Lynch analysts suggest that while MPC members can now vote for hikes, "it is not obvious that even the most hawkish BoE member is keen to raise rates imminently." The Bank's governor Mark Carney and the MPC seem to be signalling a first hike at the start of 2015, and the market is pricing that move in as well.

World First's Jeremy Cook has a nice way of describing the mood at Threadneedle Street: "The MPC has continued to adopt a laissez faire approach, it’s very much a case of ‘don’t move it! I’ve only just got the damn thing working’" 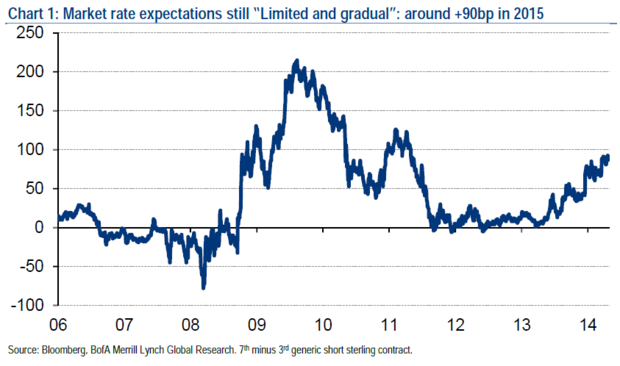