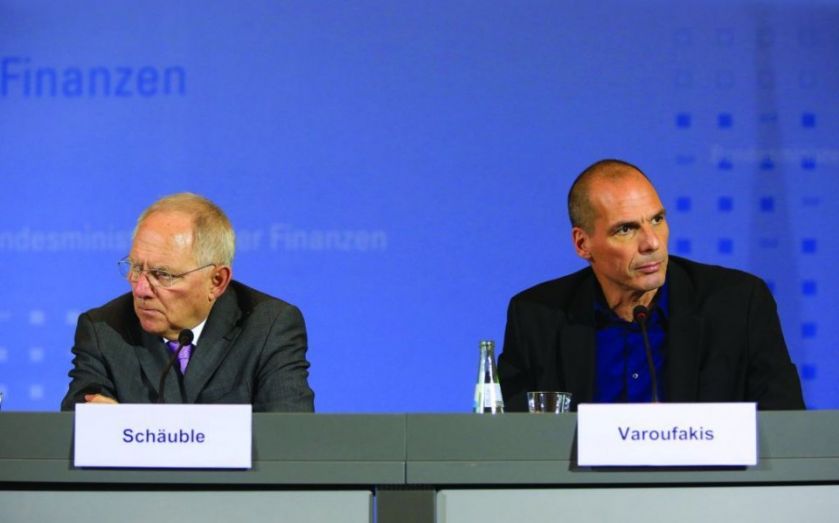 A tense meeting of the Greek and German finance ministers laid bare a still-considerable schism between the two Eurozone states yesterday, with little or no progress made over how to resolve Greece’s debt crisis.

Neither Yanis Varoufakis nor Wolfgang Schauble gave away any ground during an uncomfortable press conference, with Varoufakis strongly criticising the austerity programme imposed on Greece that Schauble insists is necessary.

The Greek chancellor appealed to Germany with a bold historical reference, saying it “must be proud of the fact that Nazism has been eradicated [in Germany]”, while warning that his own country’s plight has seen a far-right party elected to its parliament. “When I return home I shall find myself in a parliament in which the third-largest party is not a neo-Nazi party, it is a Nazi party,” he said, referring to Golden Dawn.

“We need the people of Germany to help us in the struggle against misanthropy,” he said.

Following their meeting, the two men even clashed over their verdicts of the negotiations. Schauble said the pair had “agreed to disagree”, while Varoufakis said they hadn’t agreed anything – not even to disagree.

“We did not reach agreement because it was never on the cards that we would,” Varoufakis said.

“We agreed to enter into deliberations as partners with the orientation of a joint solution to European problems that’s going to put the interests of Europe at the helm.”

The strong-willed Greek finance minister maintained he will end the “gross indignity” of fiscal tightening that Greece has been asked to conduct in return for its bailouts. Yesterday marked the end of a whirlwind tour of Europe which began with Varoufakis appearing to win over top European government officials such as Francois Hollande, Matteo Renzi and George Osborne. However, both Germany and the European Central Bank have signalled a more obdurate stance towards any loosening of conditions on Greece.