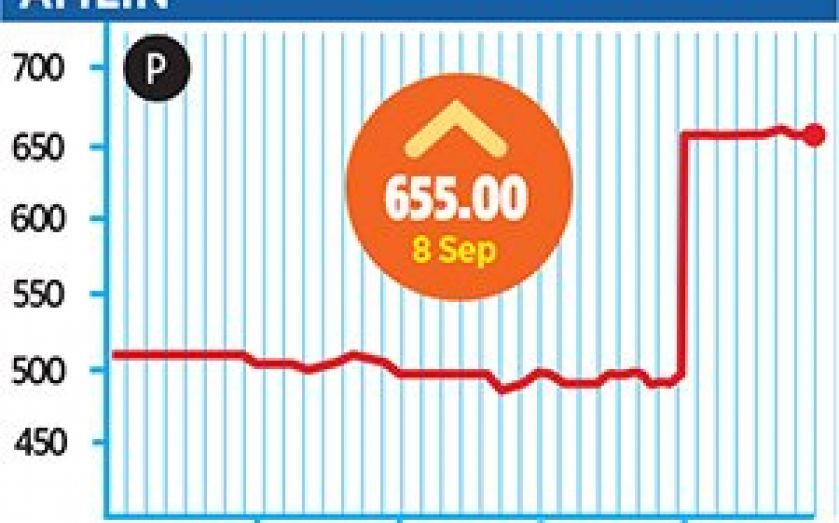 SHARES in Amlin rocketed by 32.99 per cent yesterday, after the board of the Lloyd’s of London insurer recommended a £3.5bn offer by Japan’s Mitsui Sumitomo Insurance (MSI).

Amlin revealed that MSI had offered 670p per share, a 36 per cent premium to Amlin’s closing price on Monday.

Just two weeks ago Amlin boss Charles Philipps told journalists the company was “not for sale” and was “not running a sales process”. Yesterday he told City A.M. that this still held true.

“We never put the company up for sale,” he said.

“If you put a ‘for sale’ sign on a business it causes all sorts of stress and has a poor impact on morale.”

He described the combination as “extremely compelling”, and said: “We have always had a very high regard for MSI, our strategies and corporate values are closely aligned, and this transaction will now provide Amlin with the increased scale and financial muscle that will be required for long term success in our industry.

“It delivers excellent value for shareholders, improved career prospects for our employees, and enhanced continuity and security for our clients.”

Philipps added that Amlin will continue to operate under its current management and will retain the same branding. He said he does not expect overlapping areas of the businesses to be a “major issue”.

Analysts at Shore Capital said yesterday that MSI was offering a “remarkable price” for Amlin. The broker also noted that “the scarcity value amidst the quoted Lloyd’s insurers” will likely rise even further now, given the number of deals the sector has seen of late.