GLOBAL manufacturing strengthened between August and September, recording marginal growth around the world in general, according to figures released yesterday.

The JP Morgan purchasing managers’ index for global manufacturers, produced by Markit, came in at 51.8 for last month, up from 51.6 in August.

However, advanced economies are leading the expansion, with the UK, Netherlands and Canada recording the fastest growth.

Emerging markets are still suffering from stagnation: China came in just above 50, pointing to some meagre growth, while India, Russia and Brazil were below 50, signalling that their manufacturing sectors are shrinking. 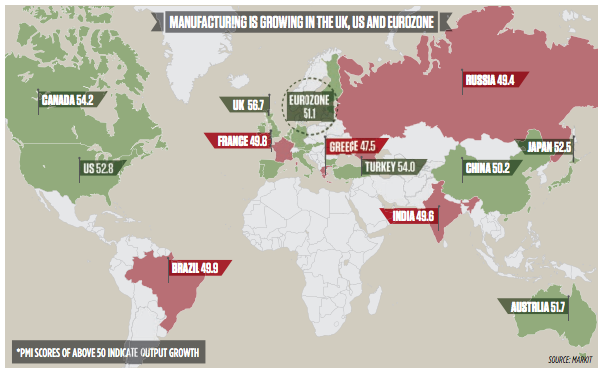 In the Eurozone, while Spain and Italy’s PMI scores stayed above the 50 mark, at 50.7 and 50.8 respectively, France’s factories  pointed to a marginal contraction again. with a PMI score of 49.8.

Markit’s chief economist, Chris Williamson, commented: “With the exception of struggling eurozone countries (Greece, France, Spain and Italy), the bottom half of the manufacturing PMI rankings consequently continued to be dominated by emerging markets.”

Williamson added that the number of countries with PMI scores below 50 fell in September, down from eight to six.