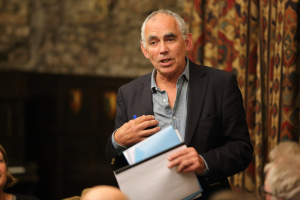 More than 140,000 people have signed a petition in supporting a Welsh coffee shop-owner's bid to be hired as the next chief executive of HMRC.

Steve Lewis, a former army officer from Crickhowell in the Brecon Beacons who now runs a coffee shop, launched a petition on Change.org, saying he would be "a people's champion" at HMRC, and take a tough stance on multinational tax avoidance.

"I believe my 19 year military career, together with my 25 years of extensive corporate business experience, working with multinationals on ethical leadership, as well as running a small business in my community, puts me in a unique position to be a people's champion on the board of the HMRC," he said, adding:

The playing field is not fair, it is not just and it damages our communities, but this month there is an opportunity to change it.

In less than a week, his petition has gained more than enough signatures to warrant a response from the government and even a parliamentary debate. However, petitions on Change.org, and similar websites including 38 degrees, do not qualify under parliament's guidelines, which only apply to campaigns launched on the parliamentary website.

Earlier this month Lin Homer announced she was standing down as HMRC chief executive after 10 years in the job, and will leave in April.

Lewis, who has run his coffee-shop, which employs 12 people, for 11 years, took part in a recent BBC 2 documentary and experiment, The Town that took on the Taxman. The programme explored tax loopholes and allowed local tradespeople to experiment with the so-called 'Dutch Sandwich' loophole, by moving their accounts offshore to tax haven, like the Isle of Man. He said:

Instead of replacing her with a lifelong civil servant or someone cosy to big business – the Government should appoint someone who champions ordinary citizens and understands small businesses.

I will have no fear or compromise in holding aggressive tax avoiders, tax abusers and tax bullies to account.

This comes as the row over Google's tax bill rumbles on. Earlier this week, media mogul Rupert Murdoch took to Twitter to blast politicians in the UK and the US for giving Google an easy way out of questions over its tax arrangements.