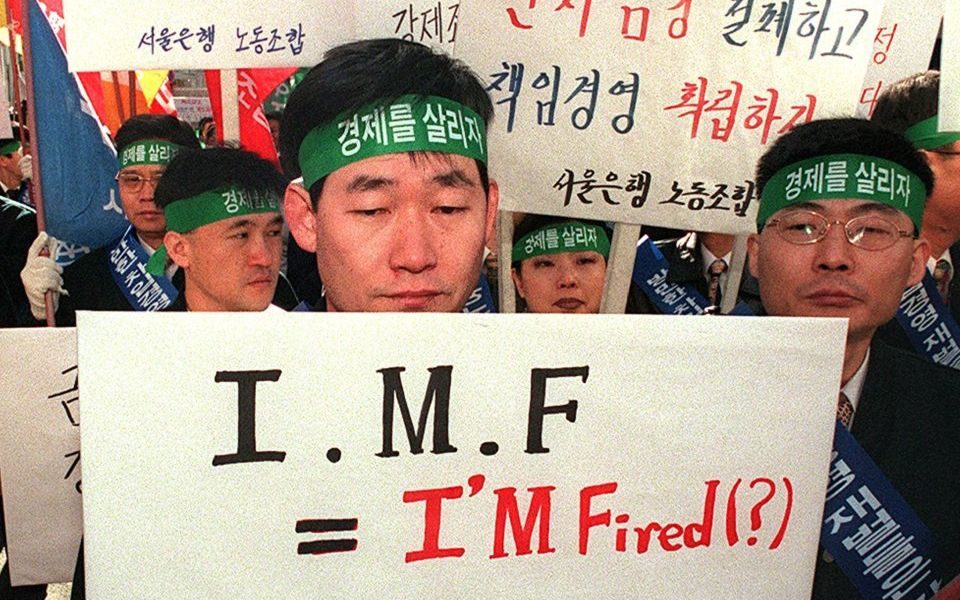 The Asian financial crisis of 1997 was a traumatic dislocation for financial markets that I experienced first hand, working as a fund manager for Schroders in Singapore.

The fallout was shocking. The Indonesian economy, for instance, shrunk by 85% in US dollar terms during the aftermath, a contraction unthinkable today.

Twenty years on, the pressing question is, given the level of debt faced by China, whether a similar crisis could be repeated and were lessons learned?

The reasons for the crisis

The first sign of trouble was a sharp fall in the Thai currency in early July of 1997. It marked the start of a domino-effect that rippled through the region.

Malaysia, Indonesia, the Philippines were all dragged into the maelstrom. Even Singapore and South Korea, despite their comparative economic strength, were drawn in.

By October 1997, stock markets were wildly gyrating. The Hong Kong market, which then made up a major component of Asian equity indices (see below), plunged more than 10% in one day after the authorities attempted to protect its currency.

Fear of contagion escalated and a few days later New York’s S&P 500 fell 7%. The fall, at the time, was the third worst daily loss in the index’s history.

So where had it all begun?

The origins of the crisis stemmed from the popularity of what was essentially an arbitrage trade. Companies and investors saw what they thought to be a risk-free deal – to borrow money from the global capital markets (primarily in US dollars) where rates were low and invest it in the Asian region where rates and returns were high.

The problem was a lot of countries in Asia became overly dependent on continued inward flows of foreign currency. The key symptom was the build up of large current account deficits, as excess demand (and speculation) was funded by attracting capital from offshore.

These countries had also become very reliant on foreign debt borrowed over short timeframes and mostly denominated in dollars. The foreign-exchange reserves countries hold, which can help ward off crises, proved inadequate.

These imbalances left Asian currencies and economies very vulnerable. To coin a phrase, as soon as the music stopped, the money that had been pouring in simply stopped and reversed. Credit was withdrawn and currencies collapsed.

The situation was made worse by the fact much of the inflows were not invested productively, by building industrial plants that would improve export capacity. Instead, a great deal was squandered by companies on speculative property developments or used to prop up stock prices artificially.

There was a further problem. China’s currency had fallen against the US dollar in 1994, making its goods cheaper relative to the rest of the region. It wasn’t an immediate impact but it certainly contributed to the pressure on south-east Asian countries when crisis hit.

Could it happen again?

A lot has changed in the 20 years since the crisis began. Critically, the countries involved are now in much better shape. Asia understands that it shouldn’t be so reliant on foreign flows, therefore most countries now run current account surpluses rather than deficits. India and Indonesia are the rare exceptions and even their deficits are manageable.

Thailand, which was at the centre of the crisis, ran a deficit that was equivalent to 8% of GDP ahead of the crisis. Today it runs an 11% surplus.

Obviously, overall debt in Asia is higher than it was in 1997. A key difference, though, is Asian countries are less reliant on short-term foreign debt and have higher foreign exchange reserves to protect them during times of turbulence, as the table below shows. Most importantly, Asia is to some degree still influenced by the memory of the crisis.

In the countries hit hardest you will meet private companies and entrepreneurs who will never forget. Even younger Indonesia businessmen can recall how their parents faced being wiped out by the crisis. As a result, they run their businesses more conservatively than they otherwise would.

In short, Asian conservatism is a welcome legacy from Asia’s near-death experience.

If there is a question mark, it is over China. Its debt relative to the size of the economy looks similar to that of the pre-crisis countries.

But there are crucial differences. Most importantly, China has a current account surplus and is therefore not so reliant on foreign confidence. It has also been paying down its dollar debt, a move quietly encouraged by the Beijing authorities in late 2015. Its situation is manageable at least for now.

For investors looking at Asia today, they should not focus on the crisis vulnerabilities of two decades ago. The real question is how the region generates growth.

The economies are maturing and demographics are less favourable – there is far less scope to raise growth through deployment of ample labour and urbanisation, possible exceptions being India, Indonesia and the Philippines.

But lower growth does not necessarily mean lower shareholder returns. The companies I look for are disruptive in the way they use technology or are benefiting from shifts in consumer spending and the rise of the middle classes. I have concerns for companies that merely hope to play the low-wage game – offering to produce goods cheaper than anyone else. Hence our focus on finding companies that offer the potential to grow rapidly due to innovation, changing consumer tastes, or driving to raise quality and value added.

Another lesson from the Asian crisis is the resilience of Asia. It was a terrible crisis. I was amazed at how little social unrest there was given the enormous contractions in the economies. There were no widespread riots. Asians dusted themselves down and got on with the task of rebuilding. As a result, economies bounced back, and so did stock markets.

There are never any guarantees when investing, but one of the lessons I took from the crisis is that it’s generally right to buy Asian equities during such times. It’s not an opportunity we expect to see in the near future but in the meantime we’ll continue hunting for stocks that show promise to grow regardless of the continent’s wider fortunes.