September marked the 10th anniversary of the moment most people had their first inkling all was not completely well with the global financial system.

On 13 September 2007, word began to spread that Northern Rock had asked for emergency funding from the Bank of England in its capacity as "lender of last resort", thus prompting the first run on a UK bank for more than a century.

A decade and a bit – or 3,669 days to be precise (including three 29 Februarys) – is a long time even in value investing terms and yet the wider market remains scarred by the experience in one key respect.

Tempted back into most other parts of the stock market over the intervening years, the majority of investors still cannot bring themselves to buy UK banks to any meaningful degree.

A barrage of negative press…

As keen students of human nature, on The Value Perspective blog, we can – on one level – understand their reticence. The months that followed Northern Rock’s fall produced a barrage of negative press about the financial sector that only grew worse after the collapse of Lehman Brothers 12 months later and, while specific headlines may have faded from memory, a general feeling of unease persists.

As it happens, courtesy of this Financial Times article, we are in a position to recall the specific headlines of a single day – 18 September 2008 – which serve to give a flavour of the vitriol being directed towards UK banks at the time.

Covered in the FT itself as “Lloyds-TSB seals £12bn HBOS rescue”, other front-page headlines that day included “Fear stalks the banks” (Times) and “Bank is blown away” (Telegraph).

Only the Daily Star had its attention elsewhere that day, its front page trumpeting: “Gazza has bottle of whiskey … for brekkie.”

…an opportunity for value investors

On another level, however, we understand reticence on the part of the wider market can often represent opportunity for value investors. Within a matter of months of the fall of Lehman Brothers, therefore, we had reached a different view from the great majority of investors on the prospects of the UK banking sector – arguing they were not quite so dire as the lowly valuations of its leading players would suggest.

We are constantly revisiting and testing our investment thinking, however, and earlier this year – after the ‘big four’ of Barclays, HSBC, Lloyds and RBS published their full-year results for 2016 – we carried out an extensive reappraisal of the UK banking sector.

From that, we produced three simple charts illustrating why we believed the risk-reward trade-off for the sector continued to look attractive.

Six months later, that belief still holds so we are rerunning the charts – the first of which compares the total assets of the big four as they stand now with how they were in 2007.

It does the same for the quartet’s "risk-weighted assets" – a measure that attempts to gauge a bank’s real-world exposure to potential losses and is used to decide how much capital a bank should therefore set aside to reduce the risk of it going bust. 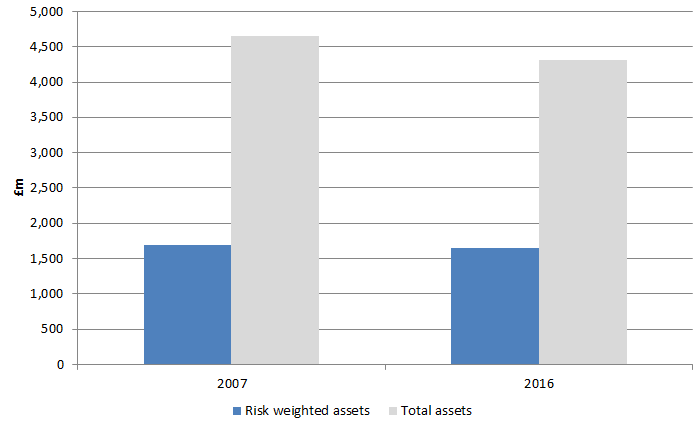 Total assets and risk-weighted assets for the four actually peaked at £6.6 trillion and £2.1 trillion respectively but as you can see – and perhaps a little surprisingly – both figures are now broadly in line with where they were in 2007.

Much more importantly, however, as our second chart shows, the UK’s big four banks have significantly fewer liabilities – also known as "leverage" – than they did just before the financial crisis. 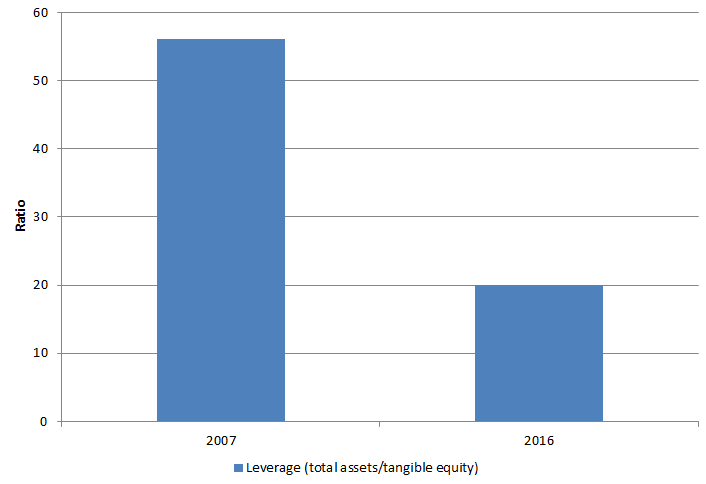 In common with other companies, banks rely on a mix of equity and debt to finance their business operations.

The higher a bank’s leverage ratio – calculated as its total assets divided by its tangible equity (which ignores ‘intangibles’, such as goodwill) – the weaker its balance sheet and the more vulnerable it will be to shocks such as the financial crisis.

So far, so good – but how is the wider market thinking about this equity, which is essentially supporting the banks?

After all, if it has recognised the banks have taken so much risk off their balance sheets, there would be less value in the share price and, consequently, here on The Value Perspective, we would feel less comfortable about maintaining our positions.

Still, it would appear we need not worry just yet.

As we saw in the chart above, the risk associated with the UK’s big four banks has definitely reduced while, as our third and final chart shows, their tangible equity – which also happens to be another measure of a bank’s ability to deal with financial losses – has more than doubled.

Yet, as the following chart also shows, those four banks’ combined market capitalisation is close to what it was in 2007. 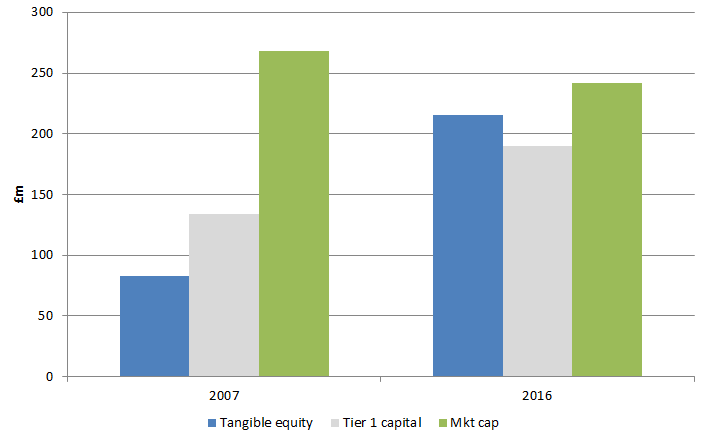 In other words, Barclays, HSBC, Lloyds and RBS have all been through a period of significant ‘de-risking’ – now holding a lot more equity relative to the liabilities on their balance sheets and the size of their businesses – and yet the market is giving them absolutely no credit for that whatsoever.

With this state of affairs largely unchanged from when we reappraised the sector back in March, we remain as comfortable with our banking exposure now as we did then.

Important information: The views and opinions displayed are those of Andrew Evans, a member of the Schroder Global Value Equity Team (the Value Perspective Team). They do not necessarily represent views expressed or reflected in other Schroders' communications, strategies or funds. The Team has expressed its own views and opinions on this website and these may change.This article is intended to be for information purposes only and it is not intended as promotional material in any respect. Reliance should not be placed on the views and information on the website when taking individual investment and/or strategic decisions. Nothing in this article should be construed as advice. The sectors/securities shown above are for illustrative purposes only and are not to be considered a recommendation to buy/sell. Past performance is not a guide to future performance and may not be repeated. The value of investments and the income from them may go down as well as up and investors may not get back the amounts originally invested.