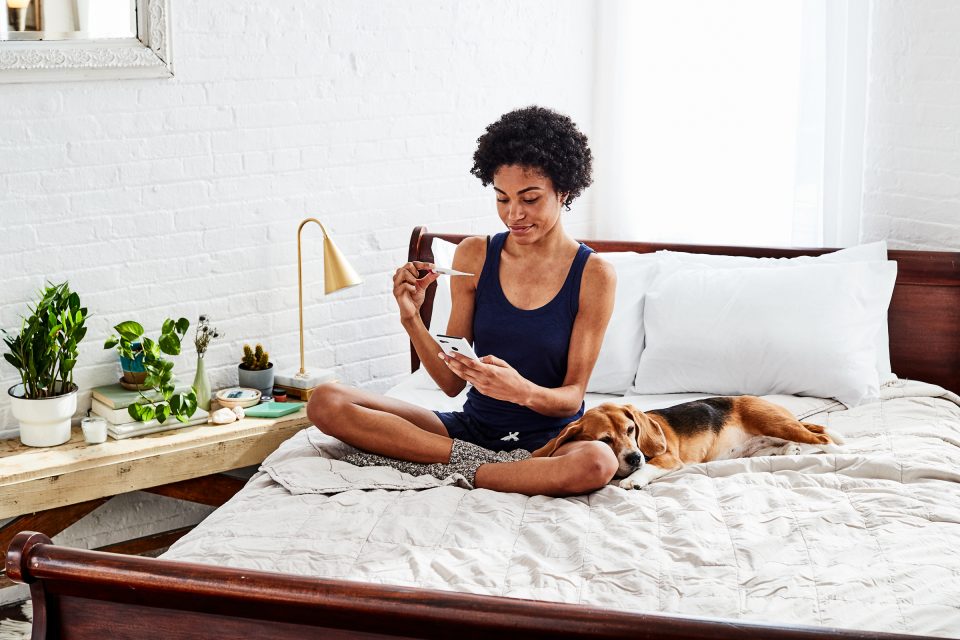 Contraception hasn’t really changed since the 60s. The pill is still very much the most widely-used option, and often an unsatisfactory one at that, with many users struggling with side effects like migraines, mood changes, or weight gain, to name but a few.

And while the long-awaited male contraceptive pill passed human safety tests earlier this year, it’s thought that it could take a decade before it’s finally brought to the market – not to mention the doubts over how popular it will be with men when it’s eventually given the go-ahead.

But there is now another option (cue the applause from women everywhere), courtesy of scientist Dr Elina Berglund.

Berglund was part of the team at Cern that discovered the Higgs Boson particle in 2012 – a discovery which went on to win the Nobel prize in Physics a year later. She has since created a company that has revolutionised birth control, and there isn’t an artificial hormone in sight.

Natural Cycles is the only digital product which is certified as a medical device for contraception in Europe and the US. With “perfect use”, the app is 98 per cent effective at preventing pregnancy (the effectiveness falls to 93 per cent with “typical use”).

Berglund tells me that the idea for Natural Cycles was conceived when she wanted to give her body a break from hormonal contraception before starting a family. When it came to natural and effective methods for preventing pregnancy, the market was barren.

While there are plenty of apps that can loosely predict how fertile a woman is by tracking her menstrual cycle, these are unreliable as a contraceptive because they assume that every woman’s body is the same.

So with her scientist hat on, the physicist began reading research to find out how a woman’s body temperature changes throughout her cycle. “I realised that I could use my knowledge of particle physics to analyse the body temperature to create an algorithm that is very good at pinpointing ovulation and when you’re fertile,” she says.

The Swedish native initially developed the algorithm for herself, but conversations with friends and her physicist husband Raoul Scherwitzl (who is co-founder of Natural Cycles) spurred her to turn it into an app, which launched in 2013. Today, Natural Cycles is a global business, with 370,000 customers in the UK alone.

It works like this: a woman takes her temperature when she wakes up every morning using a thermometer and enters the reading into the app, which tells her what point she is at in her cycle. A complex algorithm works in the background to effectively calculate her fertility; it either shows up as a red day, meaning she could get pregnant and should use protection, or a green day, meaning it’s “safe” to have sex.

There are obvious similarities to the Rhythm Method, developed by a Catholic doctor in 1930, whereby women also track their cycle using a calendar and monitor their temperature. But while that is only about 76 per cent effective as a contraception method, the Natural Cycles algorithm is personalised to each user, increasing its accuracy to the levels of the pill.

The more a woman uses the app, the more green days show up. As Berglund explains: “The algorithm starts by learning about the user’s data. It doesn’t assume anything, which means that she gets a lot of red days in the first few cycles as the app gets to know her. That eventually gets greener as you enter more data.”

I ask how the app can be so effective when every woman’s body is different, but she assures me that the algorithm takes that into account, as it’s not just women’s cycles that differ but their temperatures too. “It always shows up as red if it cannot say confidently that today is not a fertile day,” she explains.

In other words, the app won’t tell you it’s safe to have unprotected sex unless it is absolutely sure.

But what about the reports of unwanted pregnancies from some women who have used the app? When I ask Berglund about this, she is reasoned in her response. “Unfortunately, no contraceptive method is 100 per cent effective – Natural Cycles is similarly effective to the pill with typical use, but less effective than methods used inside your body like the hormonal implant.”

That’s because, like the pill, it relies on the woman using it effectively, whereas internal contraceptive methods leave less room for user error.

She tells me that overall, the app has a net-reducing effect of unwanted pregnancies in society, because most users have switched to Natural Cycles from methods that are less or similarly effective. “But of course, when you’re dealing with birth control, you will always have pregnancies. And as with any clinical device, we follow up on a monthly basis to see whether the number of pregnancies align with the effectiveness rate.”

I ask if she thinks that the backlash has been fair, and she sighs. “I don’t think it’s fair, but I understand that there is scrutiny because this is a new product. There is also an educational gap, because even if you use it perfectly, there is always the chance of pregnancy, so we are trying to be very transparent about that. Ultimately, the only way to avoid pregnancy entirely is to avoid sex.”

As well as offering an alternative to mood-altering hormones, Berglund also says that many customers find the product empowering. “A positive side effect is that you really understand what’s going on in your body – it’s not just a black box anymore.”

Interestingly, while the app is designed to prevent pregnancy, it can also work the other way by helping women get pregnant quickly once they’re ready – largely because they become more aware of how their bodies work.

Indeed, while a woman might start out using Natural Cycles as contraception (around 70 to 80 per cent use it to prevent pregnancy), Berglund explains that many will switch the mode in the app later down the line when they want to have a baby. “It’s the same users going back and forth depending on where they are in their lives,” she adds.

And what does the rise of healthtech – or femtech – mean for women in general? The founder admits that it’s still early days. “Women’s health has really been an under-researched area for so long, and we are seeing pharmaceuticals withdraw their investments into women’s health, so I think it’s really important that the tech industry takes a step up.”

Ultimately, Natural Cycles is giving women more choice – and by offering insight into how their bodies work, it could be just as powerful in society as the pill was over 50 years ago.