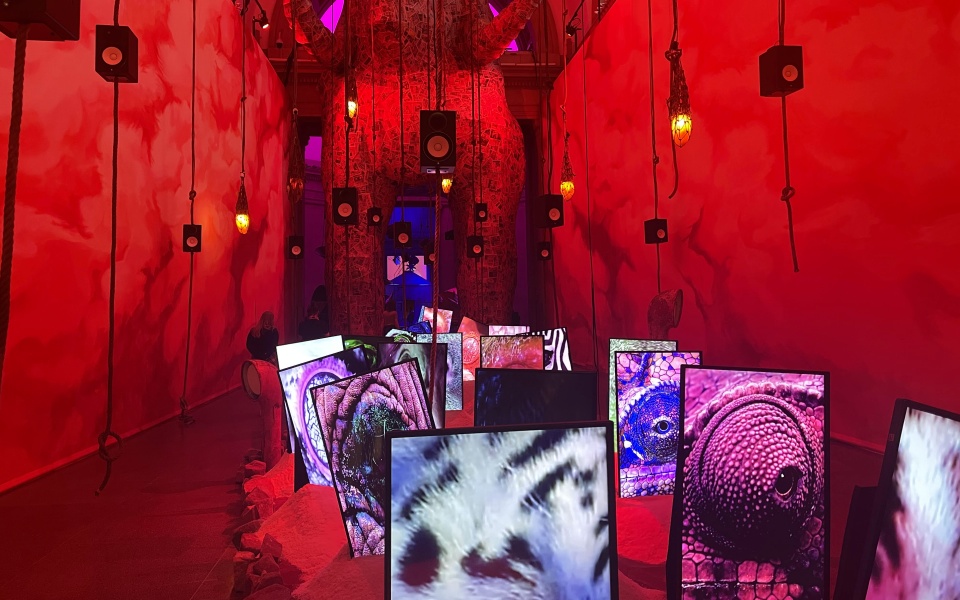 Filling a huge gallery space with a single, cohesive piece of installation art is no mean feat – just ask the Tate Modern, which has for years struggled to recreate the early magic of its Turbine Hall commissions.

The Tate Britain’s equivalent, in its cavernous neo-classical Duveen Galleries, seems to be on the opposite trajectory, starting meekly and building in recent years to one of the highlights of the cultural calendar.

Recent hits have included Anthea Hamilton’s 2018 The Squash, which transformed the gallery into a 2001: A Space Odyssey-esque, retro-futuristic space in which a performance artist each day donned a costume that looked a bit like a vegetable and invited guests to imagine how it might feel to live as a gourd. In 2017 Cerith Wyn Evans put together a crowd-pleasing installation of fluorescent lights dangling from the ceiling, and in 2019 Mike Nelson filled the place with industrial artefacts, including knitting machines and the doors from an NHS hospital (actually, I could take or leave that one).

This year Heather Phillipson raises the bar further with her neon-soaked vision of the post-apocalypse, a time after the bombs have fallen and the oil is running out and animals exist only as glitching digital eyes, judging you from the moment you enter the gallery.

From the mournful, digital wail of a whale to the herd of bowsers with papier-mâché horns glugging oil from a kiddie pool, the symbolism in RUPTURE NO 1: Blowtorching the Bitten Peach isn’t exactly subtle.

As you navigate through the galleries, between the legs of a giant papier-mâché… elephant? buffalo? you come to a room covered in projections of rib cages and polarised geese and clouds streaking across blinding skies. Huge metal insects dangle from the ceiling and a pair of those creaking wind turbines, which have become a cinematic shorthand for eerie desolation, frame a metal shack. What’s in here, then? Well, it’s a bunch of empty gas canisters being clanged by a spade that’s being blown by a big fan. It looks like something from the set of Mad Max, and the message is pretty clear: this is where we’re going to end up in the not too distant future. We’re screwed. Get used to it.

The problem – if you can call this a problem – is that it’s all too damn cool. It’s the apocalypse painted in the neon palette of a Nicolas Winding Refn movie. It’s edgy and exciting, like a scene from a video game. I wouldn’t want to live here, but it’s a blast to visit. The real apocalypse will no doubt arrive with a slow, boring, painful and protracted whimper. This is a primal scream, an electric shock. The Tate Modern should take note for the next time it needs something to stick in its Turbine Hall.