The Best of Travel: How L'Enclume transformed a Cumbrian town 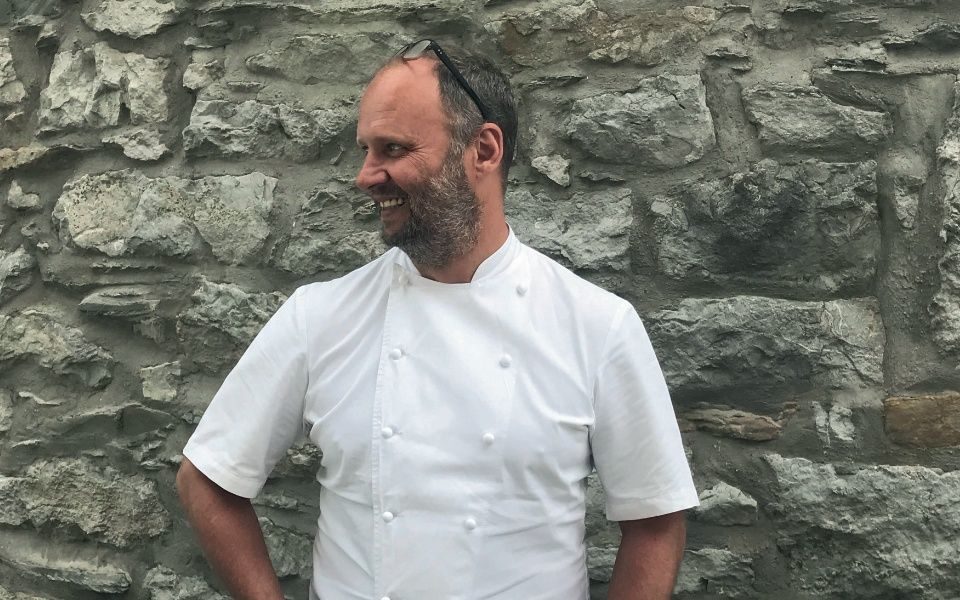 Throughout January we’re remembering better times and sunnier climes by reposting some of our favourite travel stories from the last decade. In this instalment, our Life&Style editor Steve Dinneen makes a culinary pilgrimage to Cartmel to dine at L’Enclume.

Also Read:
The Best of Travel: How L’Enclume transformed a Cumbrian town

The village of Cartmel lies just beyond the boundaries of the Lake District. It’s quietly beautiful, with squat stone buildings, rows of shops selling postcards and tourist knick-knacks, and a 12th century priory that dominates the town square.

You can find lazy, bucolic idylls like this dotted all across this part of the world. It’s the kind of place that featured regularly in the trips of my childhood, bringing with it memories of bracing walks, strange B&Bs and bouts of travel sickness. But Cartmel differs in one important regard: it’s also home to one of the most celebrated farm-to-plate restaurants in the world. Simon Rogan’s two Michelin-starred L’Enclume has been the Good Food Guide’s best restaurant for four years running.

What began as a stand-alone venture back in 2002 has become a village-wide industry, with a sister restaurant (Rogan & Co), an experimental “development kitchen” (Aulis), a now-defunct pub, a shop selling branded kitchenware, a hotel, and an ever-expanding farm. Rogan employs 80 people here; with a population of just 1,500, that means one in 20 people in Cartmel work for him. L’Enclume turns 15 this year, but Rogan says it’s all but unrecognisable from even five years ago.

Walk down Cartmel’s ancient streets on any given morning and you’ll see besuited waiters speaking in thick French and Spanish accents, and tattooed Aussie chefs darting purposefully from building to building clutching armfuls of fresh produce. “It’s added £50,000 to our property prices,” says a cheerful taxi driver. He’s joking, but it can’t be far from the truth.

L’Enclume has put Cartmel on the map. The town was included in a New York Times list of “52 places to go in 2014”; it featured in Michael Winterbottom’s award-winning comedy show The Trip; and it’s regularly written about in both the national and international press. For foodies, its out-of-the-way location makes it a culinary pilgrimage, with tables booked months in advance and trips planned with exacting precision. It’s a bucket-list destination, and consuming its famous 20-course tasting menu is often the realisation of a long-held dream.

It has also changed the face of the UK food scene, with its ingredient-led, farm-to-plate ethos now dominating high-end restaurants up and down the country. “It’s flattering,” Rogan says. “As long as people are honest about where they get their inspiration…”

It was pouring with rain – proper northern rain, the kind that falls sideways – when Dan Fairclough, one of L’Enclume’s farmers, let me tag along on his twice-weekly foraging trip. Armed with a stack of plastic punnets, we first stopped by the road to harvest aniseedy Sweet Cicely pods, then squelched into the woodland to find rolling carpets of citrus-sharp wood sorrel. On the way back we spotted some jelly ear mushrooms growing on a tree and filled another punnet.

Fairclough, who wears a flat-cap and speaks in a broad Cumbrian accent, comes from the nearby market town of Ulverston; Rogan says he tries to recruit locals wherever possible, not just out of community spirit but because they tend to stick around longer, which is a concern when your restaurant is in the middle of nowhere. Operations manager Sam Ward, one of Rogan’s key people, comes from another nearby town, Grange in Borrowdale, which the locals refer to as “God’s waiting room” because of its ageing population.

Our foraging trip was reasonably successful, and it will all end up on the menu in some form or another. But the real jewel in Rogan’s crown is the farm. In five polytunnels and a sizeable field, he grows virtually everything on his menu, with only the meat and some veg used for stock coming from nearby farms. In the tunnels are neat rows of everything from lettuce and cabbage to apple marigold and Chinese artichoke, all fed by high-tech irrigation systems. The farm has become such a popular part of the operation that some of the chefs are now opting to grow rather than cook.

Also Read:
The Best of Travel: How L’Enclume transformed a Cumbrian town

“I kind of fell into farming but now it’s at the centre of everything we do,” says Rogan. “It’s been designed and run by chefs, so whenever something is ready, boom, it’s on the menu. It was partly started out of frustration at not being able to get hold of ingredients. I was very much influenced by a guy in France called Marc Veyrat, who uses a lot of alpine herbs and flowers in his cookery. This isn’t the Alps but it’s the closest we have in the UK.”

Rogan says he wants to expand the farm even further, moving into animal agriculture, maybe getting some pigs. “We’d eat them when they were ready then they’d be off the menu. I don’t want to buy them from 50 miles away. Meat should be kept to a minimum anyway – you can eat 20 courses if it’s mostly vegetables, but you couldn’t if it was based around protein.” He says the farm has made him think differently about food. “It’s got simpler, and simplicity is perfection in my book.”

As well as expanding the farm, Rogan has a thousand other ideas to improve the Cartmel operation, including “farm tourism”, where guests are invited to inspect the ingredients as they grow; installing tanks for live seafood; buying more accommodation – he has far more tables at L’Enclume than he has rooms – and building a new staff canteen (with an operation this intense and remote, keeping up staff morale is vital).

He recently revamped L’Enclume’s sister restaurant Rogan & Co, bringing in Aussie Chef Peter Smit, who used to grill meat at the excellent Pitt Cue in Devonshire Square. His additions to the menu include lamb’s heart and white anchovy on sourdough, and a pig’s head scotch egg, both of which are excellent.

Rogan also has big plans outside of Cartmel: next month will see the opening of a permanent London version of his wildly popular pop-up Roganic (2011-2013), which he describes as “a little piece of Cartmel in the middle of London”. This will be accompanied by a London version of Aulis, which he says will be a “proper underground” venue with blacked out windows and no branding, cooking experimental dishes for just six or eight guests a night. Good luck getting a reservation.

These openings come after a decidedly rocky period for Rogan, who left both Fera at Claridge’s (in April) and The French at Manchester’s Midland Hotel (last October) with years left on both contracts.

“People don’t really associate me with Claridges,” he says. “It’s very glamorous and you can’t really turn it down but at the end of the day, do my customers want to step foot in a five star hotel in Mayfair? Probably not – they want a grungy little place in Marylebone where anything goes and it doesn’t matter about the fine drapery or the lighting or the furniture.”

He says he was unhappy with the way those ventures forced him to spend a certain amount of time in their kitchens each week: “That’s just not how you work, is it?” Despite that, he says he has “unfinished business” in Manchester, where he hoped to gain the city’s only Michelin star, although he can’t open anything there until later this year because of a non-competition agreement.

Rogan comes across as a brilliant hyper-achiever who sees anything but the pursuit of perfection as a distraction, and this can rub people up the wrong way. When he built the polytunnels at the farm, for instance, he didn’t bother applying for permission, much to the chagrin of his neighbours.

But he’s also refreshingly pragmatic. When I asked whether L’Enclume could have worked somewhere else, I expected a gushing monologue about how utterly unique and irreplaceable Cartmel is to the project. But he thinks for a few seconds before shrugging: “Yeah, probably.”

But there is something special about Cartmel. Walking from the hotel to L’Enclume as the sun was setting, the excitement was palpable. I was with a hardcore band of professional eaters, who between them have dined in just about every restaurant worth its salt. Everyone agreed this one was special. There was a nervous energy – could L’Enclume live up to our expectations and hopes and dreams?

The dining room is intimate, with whitewashed brick walls and bare wood tables. There is no “celebrity corner” held in reserve as in many destination restaurants. A poster in town said Tom Jones was playing at the racecourse down the road, and when I asked if they would find space for him, operations manager Sam Ward said probably not, adding that the presence of celebrities can upset the balance (although Pippa Middleton has eaten at L’Enclume).

The tasting menu that night was 19 courses, 20 if you include the cheese. It began with an impossibly delicate, translucent, dehydrated fennel leaf topped with apple gel, each one of which takes three days to make.

Then the table was filled with vivid red, semi-dried tomatoes and spiky tangles of pork and eel, and charred stripes of blackened leek with egg cream. The wine, of which we would eventually drink somewhere in the region of 12 glasses each, (perhaps more, I definitely asked for a refill of the Carménère, which tasted like beef Monster Munch) began to flow.

Every group of dishes, which tended to arrive in threes, worked beautifully together, each one containing potent and unusual taste combinations, many of which we could identify from our visit to the farm. Rogan likes to cook at low temperatures, preserving as much of the ingredients’ natural flavours as possible; his kitchen is filled with futuristic gadgetry to facilitate this.

Next, there were oyster crackers with pickled cockles, which were so good they must have been created through some kind of witchcraft; there was grilled onion cooked in whey and blasted with a blowtorch, which elevated prosaic ingredients to something utterly sublime. There was turbot marinated in rice bran, lamb smoked in pine (with wood sorrel flowers that could have been picked by my own fair hand), and a red dome of beetroot foam – earthy, sweet and tart all at once – sitting on a rich quail yolk with the faintest hint of bitterness from a caramelised something or other.

There were more dishes; lots more. And suddenly it was five and a half hours later, and our third dessert was arriving, and we were beginning – only beginning, mind – to feel rather full. One dessert arrived draped on the branches of a tiny tree, with edible “pebbles” of gel at its base; another was buffed with copper sugar and stamped with the L’Enclume anvil; the beautiful simplicity of what had come before had earned the odd flourish.

Rogan isn’t just a great chef, he can also seemingly see into the stomachs of his guests. Serving a 20 course meal is an impossible ballet of gastronomy, each dish needing to complement those before and after, with nothing allowed to fill you up too soon, and each one needing to satisfy and excite in its own right. It takes a preternatural knowledge of not only your craft, but of the way people dine, of their moods and their changing tastes as an evening progresses. Rogan has mastered all of this, and our band of foodies agreed this meal was up there with the best.

Rogan’s return to London is reason to celebrate, but don’t let that dissuade you from making the trip up to Cartmel, where you’ll find a culinary experience bordering on the religious.