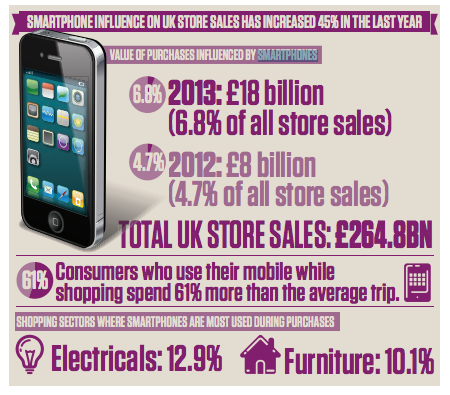 SMARTPHONES will influence more than £18bn of high street shopping sales this year, a jump of 45 per cent from 2012, according to a research out yesterday.

The survey by Deloitte found that consumers who use their smartphones before or during their shopping trip are not only more likely to make a purchase, but also tend to spend more money.

“The device is an effective tool for retailers to encourage customers to buy more products and upgrade to higher value items, at a time when profit margins remain under pressure,” said Deloitte’s UK head of retail Ian Geddes.

Healthcare stores and pharmacies are the least influenced sector – with only 4.7 per cent of sales influenced by smartphones – but are expected to increase quickly.