She speaks for the President—but is anyone listening? 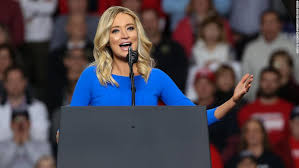 Last week a snippet of news dropped into my inbox, announcing that Donald Trump had taken time out of his busy schedule of bullish-if-confused press conferences to announce a new White House press secretary (the fourth since he was sworn in at the beginning of 2017, if anyone’s counting). Number three, Stephanie Grisham, thanked the President for “the honor of a lifetime” and is moving from the West to the East Wing as chief of staff to the First Lady.

Her successor, Kayleigh McEnany (isn’t that a perfect GOP name?), is only 31, and comes well-schooled, at least on paper: Georgetown, with a year at Oxford, then law school in Miami, transferring to Harvard. She had a stint at Fox News (of course) before working for CNN, but most of her short career in the public eye has been as a mouthpiece for political organisations—the Republican National Convention, the Trump 2020 re-election campaign, and now the big one, the White House itself. Kayleigh has seemingly, as the old saying goes, risen without trace; but not quite…

Anyone in the public eye now takes it as read, or certainly should do, that the internet never forgets, and Twitter is its conscience. Nothing can happen that is not recorded and archived somewhere, and you can guarantee that unfortunate phrases or examples of ‘mis-speaking’ will come back like Banquo’s ghost to ruin your feast if ever you attain any degree of success. So it is with Kayleigh.

In 2012, when she was a tender 24 years old, it must be admitted, she tweeted under the hashtag #ObamaTVShows “How I Met Your Brother — Never mind, I forgot he’s still in that hut in Kenya”, a direct (and neatly racist) reference to the then-current ‘birther’ conspiracy which alleged that Barack Obama had been born in Kenya and was, therefore, ineligible for the presidency. Nor has she learned caution or prudence in the intervening years. Only in February this year, she told Fox Business, “We will not see diseases like the coronavirus come here,” adding, as if it were needed, “and isn’t that refreshing when contrasting it with the awful presidency of President Obama?” Not content with that, she went on to accuse Democrats of “rooting” for coronavirus, wanting the stock market to crash and not caring how many Americans died in the process.

As an exercise in political discourse, she has demonstrated that she is simplistic and crass, crudely partisan and shamelessly opportunistic, even by the rough-and-tumble standards of modern America. But I’ve thought about this, and I mentioned it in one of my conversations with my good friend Anthony Scaramucci, who has experience of the White House cockpit. We had come to the same conclusion: whatever grotesque slander Kayleigh McEnany might deliver in the press room, it doesn’t really matter because no-one is listening.

I don’t know if it’s a result of the pandemic health crisis or if COVID-19 has simply accelerated a process which already existed, but government in the traditional sense—policy announcements, flourishes of statistics, sniping across the aisle—suddenly doesn’t seem very relevant or interesting any more. Of course we want to know what an administration is doing to combat the coronavirus (which is why the BBC covers the 5.00 pm Downing Street briefings live), but other, more mundane issues seem minor-order matters, and, dare I say it, even a little childish. Who cares which party has a slightly more popularly nuanced policy on rubbish collection or train fares when the global population is facing a genuinely existential threat?

Will we return to ‘business as usual’ when the crisis passes? I don’t know, but I sense not. The pandemic has been a big enough shock to the global system that I don’t think all the pieces will fall back into place exactly as they were. I think we’ll see (at least) three major changes when this is all over.

Maybe I’m being too optimistic—I tend to see the glass as half-full—but it would be comforting to think that, when the world emerges from this current convulsion, we may, possibly, have learned something more about ourselves as a society and how we interact. But don’t expect that message to come from the White House press room!