The identity of Jaffa Cakes, Britain’s ninth favourite confectionary, has been up for debate since their introduction in 1927. In 1991, a VAT tribunal finally ruled the snacks were in fact biscuit-sized cakes.

YouGov data from 2017 shows about half of Brits agree. Some 51 per cent of the public consider a Jaffa Cake to be a biscuit, while 38 per cent say it’s a cake. One in nine (11 per cent) admit they’re not sure.

Now, maker McVitie’s are reopening the debate in the brand’s first standalone TV campaign in 15 years, alongside social media partnerships, an AR digital experience, and PR and influencer content.

The advert depicts a shopkeeper who after debating Jaffa Cakes’ culinary status, realises he can fulfil his dreams: “If a cake can be a biscuit, I can be king of the roller palace.” The ad ends as the shopkeeper transforms his store into a disco and dances with the strapline: “Be what you want to be.”

YouGov BrandIndex data shows that since the campaign’s launch on 26 February, Ad Awareness scores, which measure whether someone has seen or heard of an advert by the company in the past two weeks, increased by 8.2 points to 10.8 among Britons. 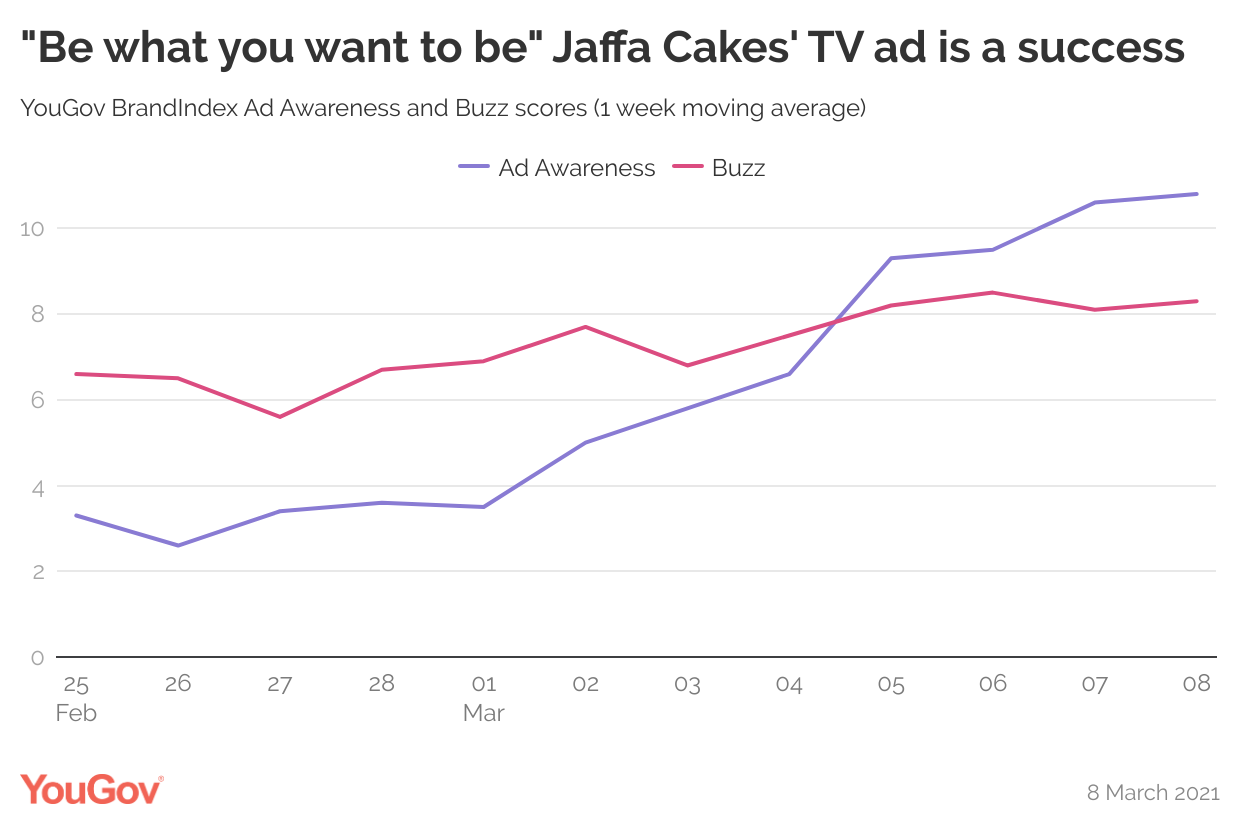 Buzz scores (a net measure of whether consumers have heard anything positive or negative about the brand in the last fortnight) also increased from 5.6 on 27 February to 8.5 at its peak on 6 March. This indicates the advert has been positively received by consumers.

Impression scores (whether someone has a positive or negative impression of a brand) similarly increased from 38.8 on the 27 February to 43.8 on the 5 March, implying that the campaign release has had an effect on the standing of Jaffa Cake’s brand among consumers.

As for whether the advert will increase Jaffa Cake’s customer base, it’s hard to identify a direct correlation between sales and advertising. But Purchase Intent scores (whether a brand is someone’s first choice to purchase from) increased by 3.9 points to 7.7 per cent.