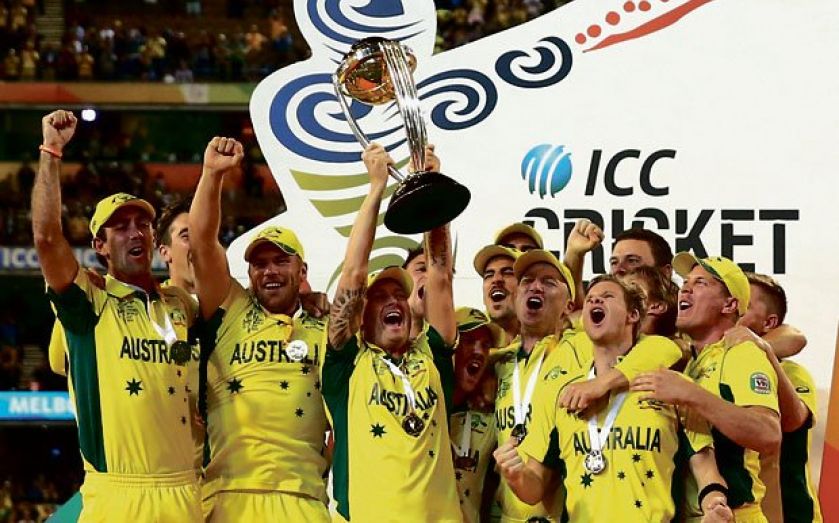 AUSTRALIA skipper Michael Clarke dedicated his side’s fifth World Cup title to former teammate Phillip Hughes, who tragically died in November aged 25 after being struck on the neck by a bouncer.

Clarke led Australia to a seven-wicket win over New Zealand in a clash of the co-hosts in yesterday’s Melbourne final, bowing out of one-day international (ODI) cricket in style by scoring a stylish 74.

Stand-in Test captain Steve Smith finished unbeaten on 56 as Australia comfortably chased down their victory target with more than 16 overs to spare, after New Zealand were dismissed for just 183, despite a resilient 83 from Grant Elliott.

“I think for everybody in Australian cricket it’s been a really tough few months,” said Clarke, who wore a black armband containing Hughes’ initials. “I’ll wear it every game I play for Australia,

“I’m sure I don’t just speak for myself, I’m sure everybody standing on this stage tonight will say that we’ve played this World Cup with 16 players and tonight is certainly dedicated to our little brother and our teammate Phillip Hughes.

“Hughes used to party as good as any of them so I’ll make sure we drink two beers at a time tonight, one for Hughesy and one for us.”

Paceman Mitchell Starc set the tone for Australia’s powerful performance in the field by bowling New Zealand captain and talisman Brendon McCullum in the match’s first over.

Starc finished with figures of 2-20 and was named player of the tournament after finishing as the joint top wicket-taker alongside Black Caps’ seamer Trent Boult, with 22 scalps.

“Obviously, I’m over the moon. What a tournament,” added Clarke, who will now focus solely on Test cricket after announcing his ODI retirement on Saturday. “We’re really proud, it’s a wonderful achievement. It’s a great thing just to make a World Cup final, but to be able to win in your own back yard in front of your family and friends is extremely special.

“It’s been an honour and a privilege to represent my country in both Test and one-day cricket. The time is right for me to walk away from one-day cricket but I’ll keep playing Test cricket.”