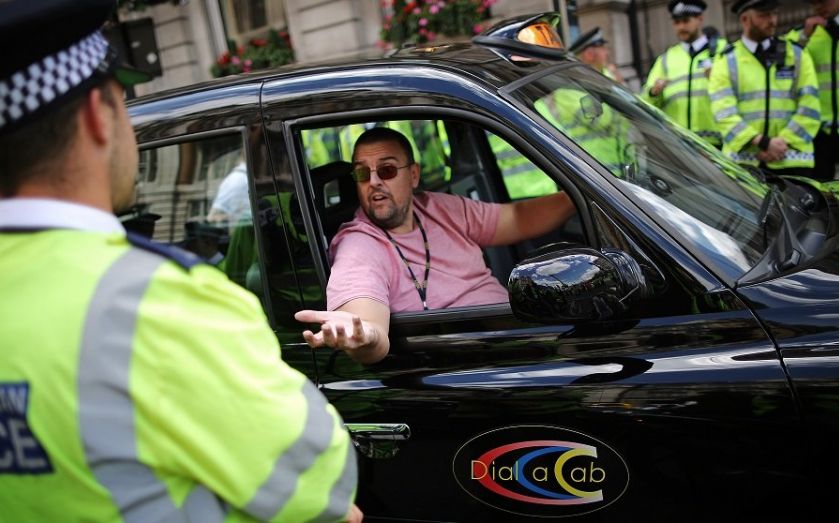 Here's everything you need to know about the action by London cabbies.

Where and when did the protest take place?

The drivers started the "go-slow" protest on Oxford Street in the heart of London at 2:00pm, bringing Oxford Street to a standstill.

How long did it last?

While there was a significant amount of inconvenience caused by the action, the protest was supposed to last only 15 minutes. But Oxford Street continued to be blocked long after 2:15pm. The protest had been planned to last two hours.

Why were they protesting?

The United Cabbies Group (UCG) called the protest against Transport for London (TfL) who they say have not acted to introduce sufficient regulation to protect black cabs from new competition.

The UCG complained that black cab drivers went through extensive training but now face intense competition for business from minicabs and taxi apps like Uber.

The protesters argue regulators are not enforcing existing rules on the minicab trade. The UCG said on its website: "We all know there is no enforcement in the West End on any night of the week, which is infested with mini-cabs unhindered by compliance officers or the police.”

What did TfL say?

This demonstration is not supported by any of the recognised trade bodies or associations and the reasons behind it are unclear.

We would urge the organisers not to cause unnecessary disruption to other road users.

What did black cab rivals say?

The competitors to London's black cabs have given their verdict on today's protest. Remo Gerber, chief executive of GetTaxi, commented:

GetTaxi believes that all London drivers, taxi and private hire, should be regulated to a similar high standard as black cab drivers, including full background checks and good knowledge of the city.

While we welcome competition in all its forms, we understand the frustrations of some black cab drivers who feel that it is unfair other drivers are less regulated and have less training.

Today’s ‘Enough is Enough' protest being held by London’s black cab drivers is out of sheer frustration. However, no matter how much us law abiding businesses in the minicab and taxi industry protest, the decision is with the highest court in the land, so causing street blockades is only going to affect consumers, not the perpetrator.