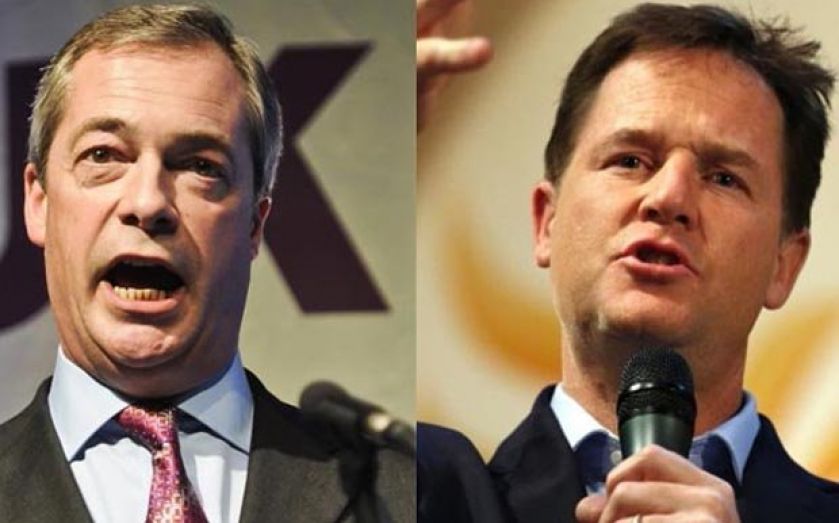 I HAVE never seen anything like it. Nick Clegg’s trouncing in a televised debate with Ukip leader Nigel Farage this week was spectacular. Not so much for the drubbing of the deputy Prime Minister – even among the Lib Dem faithful, his popularity has been in the doldrums for years. Nor for the strengths of Farage, whose policies on immigration in particular remain ill-judged. But never has the great gulf fixed between our entire political class and the public it exists to serve been clearer.

For Clegg didn’t fail off the cuff. A whole team of people had to work very hard to make him that bad. They gave us a painfully rehearsed script that, where it should have dazzled, fizzled. The jokes were written by people who had heard there was such a thing as humour, but hadn’t quite got the part about punchlines. “If I’m the leader of the party of in, he’s the leader of the party of Putin.” Seriously?

Or take Clegg’s refusal to make eye contact with his debating partner. This must have seemed brilliant to the yellow-hued set in their prep sessions – but why? They missed the simple rudeness of the gesture, and sent their leader out to look petulant and boorish.

It would be tempting to single the Liberal Democrats out as victims of some sudden and temporary insanity. But the spin room after the debate made it clear that such excuses will not do. Clegg’s performance was execrable by normal, human standards: pompous, staged, rude and brittle. With a manufactured wildness, he warned of Ukip scaremongering, while offering no better reason to stick with the EU than fear of the consequences. He was yesterday’s man, selling yesterday’s broken promises. Yet the consensus was that he did pretty well.

I spent part of the week suffering with a fever, so at first I put this impression down to lingering delirium. But again and again, even after the polls made it undeniable, the people who are supposed to be in the know, not just interested politicians but senior members of the commentariat, couldn’t see what was wrong with Clegg’s performance. Weren’t there soundbites? Didn’t he sound passionate? Wasn’t it clever how he used Farage’s comments on Putin against him? If you want to understand why Lib Dem central turned out a baffling, robotic sham, it helps to know that the people who are judging their work have lost all contact with reality as well.

Not so the voters. YouGov polling showed not just a 68 per cent win for Farage, but Farage gaining ground most among those you might think least likely to support his cause: Labour and Lib Dem supporters, even those who support staying within the EU.

It is an unsustainable democratic settlement, to have the rulers so cut off from the ruled. It should have been a terrifying night for the British establishment, but they didn’t even notice. Complacent, insulated from popular sentiment, they sit laughing at one another’s jokes, not even realising what is happening.