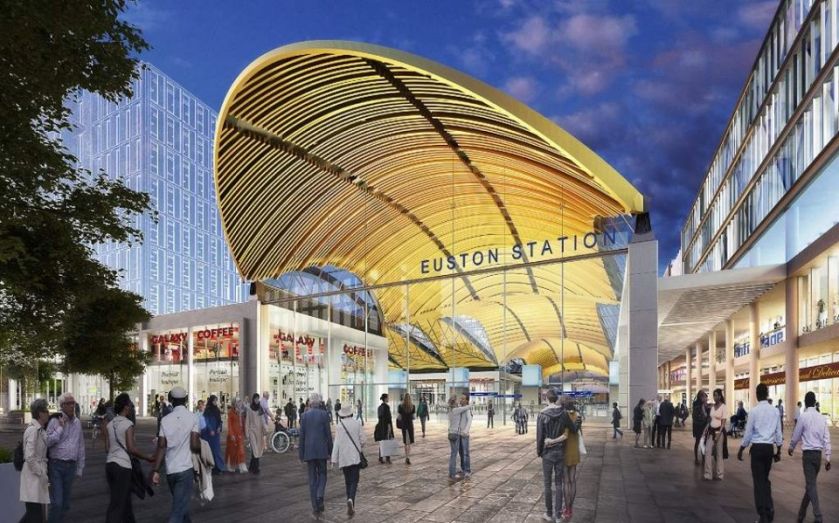 Commuter chaos will relocate from London Bridge to Euston as the government sets out ambitious plans for the North London station's redevelopment as part of High Speed 2.
The government will submit plans to introduce HS2 to Euston station, which will include 11 purpose-built platforms and a significant improvements to Euston Tube station, to Parliament next week.
The plans are in two stages "as part of a phased approach that means less disruption for passengers", the government said this morning. They will "unlock the potential at the site of the capital’s greatest regeneration opportunity".
Phase one will introduce six high speed platforms and concourses to support the opening of services between London and the Midlands by 2026; the next five will be built as part of phase two, which will support services between London and Leeds/Manchester, which will launch in 2033.
The plans also include public spaces for shops, restaurants and cafes, as well as potential redevelopment of the remaining existing station platforms and concourses, subject to future funding and approvals.
Euston Tube station will also been "significantly enhanced", the government said. Plans include greater space and connections to services as well as a new ticket hall and direct subway to Euston Square station. Access to taxis, buses and cycles will also be "greatly improved".
Simon Kirby, HS2 chief executive, said: "It’s time for Euston to change. Not just if it is to fulfil its historic role as the gateway between London and much of the rest of the country, but also if it’s to become a much bigger and fully accessible part of its own community.
"Just a stone’s throw away, we have seen how the stations at King’s Cross and St Pancras have transformed the surrounding areas into vibrant and thriving locations. We must replicate and build on that commercial and architectural success. Now is the time for Euston to catch up with its neighbours to meet the requirements of the 21st century and beyond."
Rupert Walker, Euston development director for HS2 and Network Rail, acknowledged the development would "inevitably cause disruption to both the community and commuters" but said Network Rail would "at each stage we will do our best to explain what we are doing, and why, as well as listening to ideas about what the new Euston should look and feel like".
"We will also set out at each stage how we will try to minimise the impact of the work and attempt to respond to concerns from both the community and passengers, learning from experiences on other major projects," he said.
Transport secretary Patrick McLoughlin said: “HS2 offers a once in a lifetime opportunity to revolutionise not just Euston station but a whole area at the heart of London. The new station will be the catalyst for wider redevelopment and so it is right that we are ambitious in our plans to dramatically improve the design, capacity and technology used.
“The plans outlined today are essential for the local community, but they also set out a vital piece of infrastructure that will benefit the whole nation – both by improving journeys, and also by supporting jobs, enabling business growth and bringing our country closer together. These are the first steps towards creating a station in Euston of which both the local community and national passengers can be proud.”
Share: