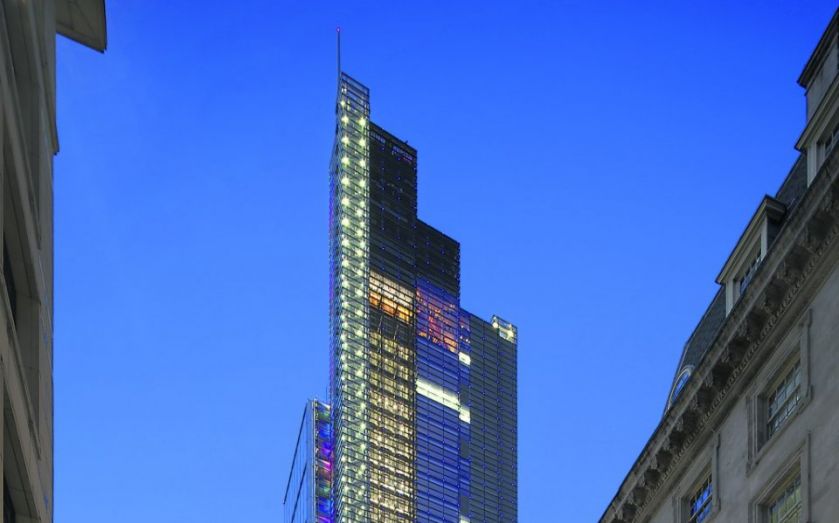 Only one company in the Heron Tower has alluded to this week’s police raid. We ask who they are…

Three days ago police raided offices in the Heron Tower, hauling 13 City workers out of the building and away for questioning. The event has sent shockwaves through the Square Mile; but aside from pub gossip and wine bar speculation, there has been little but eerie silence throughout the rest of the week.
The City of London police issued a statement on Tuesday confirming the arrests, made on suspicion of fraud and money laundering. Otherwise, the only squeak to be heard came from a foreign exchange platform located in the tower. “CWM FX is operating as normal,” the tweet said. “Merely an AML [anti-money laundering] enquiry & had no correspondence to us.”
The tweet was deleted later in the day.
On the same day CWM FX instructed high-profile lawyer Charlotte Harris – now working for Kingsley Napley, having left Mishcon de Reya towards the end of last year. Through Harris, who is best known for her role in the phone-hacking inquiry, CWM FX denied that it has been raided by the police or that it has been implicated in any investigation at all.
The company has been keen to show the world that it is “operating as normal”. General manager Craig Droste appeared on CWM FX’s daily market report on Wednesday – a video published every day on YouTube discussing market events for keen traders to look out for. Meanwhile, the firm’s official Twitter account continues to report market-moving events.
So what is CWM FX and who are the main players behind it?

The men at the top of CWM FX have been living it up this year – meeting Royalty, mingling with world champion boxers, and enjoying top-of-the-table Premier League clashes from the comfort of an executive box at Stamford Bridge, home of Chelsea FC.
Keen to attract the spotlight, the forex trading platform has gone on a big marketing drive in recent months.
Football clubs, rugby clubs, boat shows, boxing events, motorbikes, racing cars – all have had the CWM FX logo slapped over their own sporting brands.
CWM FX started the year by signing a deal to become Chelsea football club’s “online forex trading partner”. The company has been making the most of its links with the west London Premier League club, inviting IBF World Super Bantamweight boxing champion Carl Frampton to its corporate box at Stamford Bridge for the crunch clash against title-holders Manchester City at the end of January.
CWM’s links to boxing stem from a deal made in October last year. Boxing legend Barry McGuigan currently runs CWM Cyclone Promotions, through which he manages Frampton and several other boxers.
January also saw CEO Anthony Constantinou and his right-hand-man Droste meet Princess Anne at the CWM FX London Boat Show. “It was great to meet her, she’s obviously a very influential person in the sailing world,” Droste said at the time. “She sails herself. We also made a really good connection with Anne, she is a patron of the Riders for Health foundation and our CEO made a very, very generous donation to that charity, so there was some nice synergy there. And having a maritime background myself, there were some interesting talking points.”
CWM FX sponsors a MotoGP racing team – motorcycling’s equivalent of Formula One – named CWM LCR Honda, home to British driver Cal Crutchlow. It also sponsors rugby team Wigan Warriors, and on Tuesday this week – the day of the police raid at the Heron Tower – was revealed as the new sponsor of SV Racing, which will race in the 2015 Renault Clio Cup.

THE MYSTERIOUS WORLD OF CWM

The aforementioned daily video that CWM FX broadcasts on YouTube is recorded high up the Heron Tower at 110 Bishopsgate – the glitziest new skyscraper in the City and home to exclusive bars and restaurants such as Sushi Samba and the Drift.
The building, also known as Salesforce Tower, is the registered address of several companies directed by Constantinou, the 33-year-old chief executive of CWM FX.
Names such as CWM Ventures Limited and CW Markets Limited have been incorporated at Companies House in recent years, naming Constantinou as a director and the Heron Tower as their address.
Constantinou’s empire, run under the name CWM World – also located at the Heron Tower – offers numerous financial and legal services. The CWM World website lists 31 different brands, including CWM FX, CWM Life, CWM Securities, CWM Funds, CWM Junior Isa, CWM Compliance, CWM Legal and many more.
As for CWM FX – the source of the tweet – the company’s own website says it is operated by a Cypriot investment firm named Leverate Financial Services
However, it is also listed as a trading name of a company on the FCA register of companies regulated in London.
City A.M. asked the company – via its lawyer at Kingsley Napley – for an explanation regarding its registration and regulation, yet received no answer at the time of going to print early this morning.
No statement has been made by CWM FX – save for the curious disappearing tweet and Kingsley Napley’s unequivocal denial that CWM FX were the police’s target – and neither has the company answered a number of questions presented to its lawyers in writing by City A.M. yesterday morning. City A.M. has been trying to contact CWM FX since Tuesday, yet no spokesperson has offered any comment or guidance.

AFTER THE DUST SETTLES

For now, silence may reign in official circles surrounding the 3 March raid at the Heron Tower. Yet the internet is increasingly rife with speculation about what happened that day on the 21st floor and who the raids were aimed at. The police are expected to make further statements in the coming weeks, if not days.
Share
Tags: Forex rate-rigging scandal