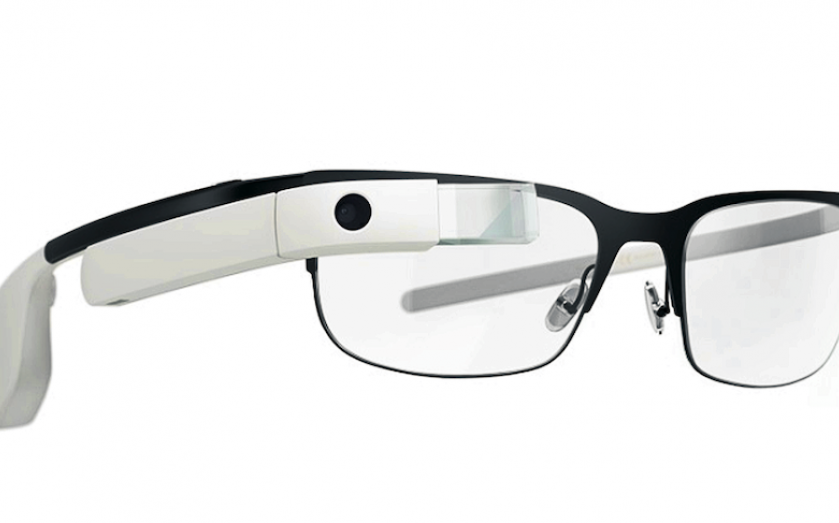 They’re here! And they makes you look just as daft as we thought they would! Google Glass augmented reality specs – a computer you wear on your face, including a camera and personal organiser – have finally hit shelves in the UK – but only for early-adopting geeks rich enough to fork out a cool £1,000. So, are they worth it? Well… No. There just aren’t enough apps available to justify the outlay (they are still technically a prototype), and that’s without considering the possible legal issues (can you drive in them? Wear them near schools? At the cinema?). But every person who jumps aboard provides more incentive for developers to create the apps that will make these a staple of the future. Here’s the lowdown on the world’s most futuristic eyewear.

Prism
The “Prism” is what makes the magic happen. This  semi-transparent block is used to project images directly onto your retina, making images appear as if they are overlaid onto reality. The images themselves are semi-transparent, meaning you can still see what’s going on around you, the idea being that you don’t end up under a bus after day one.
Camera
Take pictures by simply talking to yourself. Broadcast whatever you’re looking at over the web (free if you’re connected to wi-fi) by saying “OK, Glass, start broadcasting” (after registering with the Livestream app). Record 720p HD video and 5mp stills. The quality is fairly poor (equivaent to an iPhone 4 camera) but the possible uses are tantalising.
Apps
Right now apps are limited but they do show potential. Google showcased a constellations app that overlays information about the stars as you gaze at the heavens. For those interested in crypto-currencies, you can load a bit-coin tracker onto the glass so you can try to aviod the next crash.
Hardware and software
The exact specs aren’t clear but it seems to be a fair bit lower spec tat a high-end smartphone, with a dual-core processor and somewhere around 1GB of RAM. Unsurprisingly, it runs Google’s Android software (Ice Cream Sandwich).  Don’t necessarily freak out, though – a lot of the unit’s power will be “borrowed” from the smartphone it’s linked to.
Microphone
The whole point of Google Glass is that it blends using a smartphone-like device with going about your daily life, and that means hands-free. The microphone allows you to speak to both the device, which understands commands, and to friends, either over video/audio conferencing or phone-calls linked to your smartphone. To start, just say “OK, Google Glass…”
Speakers
Google Glass’s speakers are rather more interesting than your avearge audio devices. It uses “bone conduction”, a technology where a vibrating element provides audio via direct contact with the user’s head. It’s similar to the technology used in hearing aids.
Battery
Battery life issues are the bane of our lives – iPhones seem to spend an inordiante amount of time on one per cent – so how does Glass measure up? Google claims a day’s “typical” use, but if you go around recording everything you look at, expect them to fizzle out some time after noon.