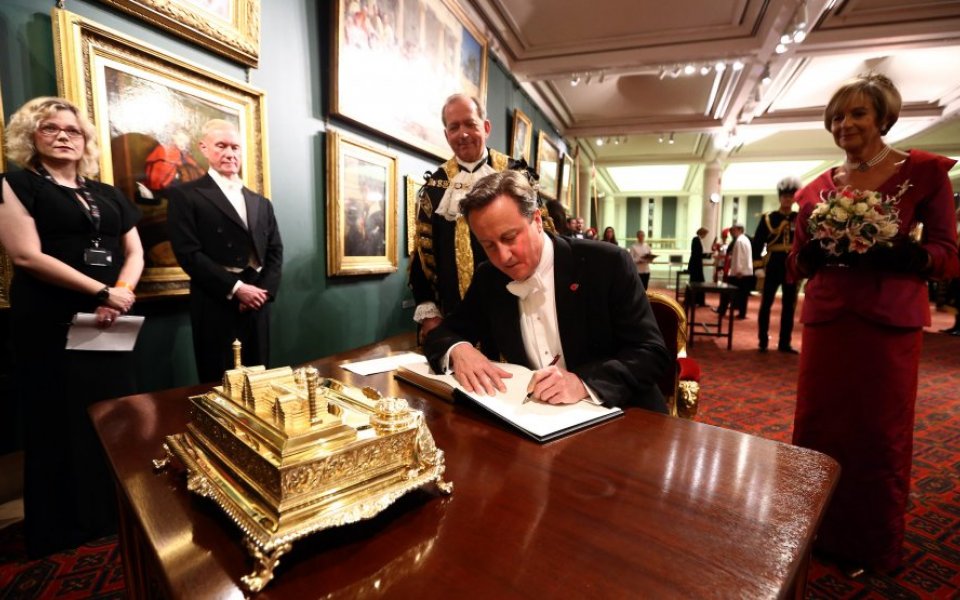 David Cameron has finally outlined his plans for EU renegotiation to European Council president Donald Tusk. But what did he actually ask for?

The full thing comes in at a weighty 2,000 words across six pages. The letter suggests the pair are on first-name terms – beginning with "Dear Donald" and ending with a simple "Yours, David".

Here's the letter, in its full glory:

Thank you for inviting me to write setting out the areas where I am seeking reforms to address the concerns of the British people over our membership of the European Union.

As you said, the purpose of this letter is not to describe the precise means, or detailed legal proposals, for bringing the reforms we seek into effect. That is a matter for the negotiation, not least as there may, in each case, be different ways of achieving the same result.

I am grateful for the technical discussions that have taken place over the last few months and, as we move to the formal stage of negotiations, I welcome this opportunity to explain why these changes are needed and how I believe they can benefit all Member States. I am also making a speech today to update the British people on the process for the negotiation and how I intend to address their concerns.

I have been encouraged in many of my conversations with my fellow Heads of Government in recent months that there is wide understanding of the concerns that I have raised, and of the case for reforms that would benefit the European Union as a whole. I particularly appreciate your own personal support throughout.

The European Union has a long history of respecting the differences of its many Member States and of working to overcome challenges in a way that works for the whole European Union. For example, with the protocols and other instruments agreed for Denmark and Ireland, the EU was able to arrive at a settlement, which worked for each country and did not disadvantage other Member States.

Our concerns really boil down to one word: flexibility. And it is in this spirit that I set out the four main areas where the United Kingdom is seeking reform.

There are today effectively two sorts of members of the European Union. There are Euro members and non-Euro members. As set out in Protocol 15, the United Kingdom has a permanent opt-out from the Eurozone. Other countries will in due course join the Euro. But, for now, there are nine of us outside; and it matters to all of us that the Eurozone succeeds. So we do not want to stand in the way of measures Eurozone countries decide to take to secure the long-term future of their currency. But we want to make sure that these changes will respect the integrity of the Single Market, and the legitimate interests of non-Euro members.

I am confident we can achieve an agreement here that works for everyone. Britain is not seeking a new opt-out for the UK in this area — we have the opt-out from the single currency we need. Nor are we looking for a veto over what is done in the Eurozone. What we seek are legally binding principles that safeguard the operation of the Union for all 28 Member States — and a safeguard mechanism to ensure these principles are respected and enforced.

These principles should include recognition that:

People across Europe want the European Union to help generate growth and jobs. The United Kingdom has always been a champion of making Europe more competitive.

So the United Kingdom welcomes the current European Commission's focus on supporting economic growth and scaling back unnecessary legislation. This has included some important measures that British businesses have called for, such as the further steps towards a single digital market, which could add 3 per cent to EU GDP; and a Capital Markets Union, which will help get finance to entrepreneurs and growing businesses.

The United Kingdom also welcomes the new trade strategy published last month, reflecting an agenda we have been advocating for years and including pursuing potentially massive trade deals with America, China, Japan and ASEAN.

But with the best will in the world, we would all acknowledge that the EU can go much further. In particular, for all we have achieved in stemming the flow of new regulations, the burden from existing regulation is still too high. So the United Kingdom would like to see a target to cut the total burden on business. The EU should also do more to fulfil its commitment to the free flow of capital, goods and services. The United Kingdom believes we should bring together all the different proposals, promises and agreements on the Single Market, on trade, and on cutting regulation into a clear long-term commitment to boost the competitiveness and productivity of the European Union and to drive growth and jobs for all.

As you know, questions of sovereignty have been central to the debate about the European Union in Britain for many years. I have three proposals in this area. First, I want to end Britain's obligation to work towards an "ever closer union" as set out in the Treaty. It is very important to make clear that this commitment will no longer apply to the United Kingdom. I want to do this in a formal, legally-binding and irreversible way.

Third, I want to see the EU's commitments to subsidiarity fully implemented, with clear proposals to achieve that. As the Dutch have said, the ambition should be "Europe where necessary, national where possible". In addition, the UK will need confirmation that the EU institutions will fully respect the purpose behind the JHA Protocols in any future proposals dealing with Justice and Home Affairs matters, in particular to preserve the UK's ability to choose to participate. National Security is — and must remain — the sole responsibility of Member States, while recognising the benefits of working together on issues that affect the security of us all.

The UK believes in an open economy. But we have got to be able to cope with all the pressures that free movement can bring — on our schools, our hospitals and our public services. Right now, the pressures are too great. The issue is one of scale and speed. Unlike some other Member States, Britain's population is already expanding. Our population is set to reach over 70 million in the next decades and we are forecast to become the most populous country in the EU by 2050. At the same time, our net migration is running at over 300,000 a year. That is not sustainable. We have taken lots of steps to control immigration from outside the EU. But we need to be able to exert greater control on arrivals from inside the EU too.

Britain has always been an open, trading nation, and we do not want to change that. But we do want to find arrangements to allow a Member State like the UK to restore a sense of fairness to our immigration system and to reduce the current very high level of population flows from within the EU into the UK. These have been unplanned and are much higher than forecast — far higher than anything the EU's founding fathers ever envisaged. These very substantial flows of population have, of course, also had a significant impact on a number of Member states, many of whose most highly qualified citizens have departed en masse. So this is a shared challenge.

We need to ensure that when new countries are admitted to the EU in the future, free movement will not apply to those new members until their economies have converged much more closely with existing Member States. We also need to crack down on the abuse of free movement, an issue on which I have found wide support in my discussions with colleagues. This includes tougher and longer re-entry bans for fraudsters and people who collude in sham marriages. It means addressing the fact that it is easier for an EU citizen to bring a non-EU spouse to Britain than it is for a British citizen to do the same.

It means stronger powers to deport criminals and stop them coming back, as well as preventing entry in the first place. And it means addressing ECJ judgments that have widened the scope of free movement in a way that has made it more difficult to tackle this kind of abuse.

But we need to go further to reduce the numbers coming here. As I have said previously, we can reduce the flow of people coming from within the EU by reducing the draw that our welfare system can exert across Europe. So we have proposed that people coming to Britain from the EU must live here and contribute for four years before they qualify for in-work benefits or social housing. And that we should end the practice of sending child benefit overseas. I understand how difficult some of these issues are for other Member States and

I look forward to discussing these proposals further so we can find a solution that deals with this issue.

As we agreed, the details of the reforms in each area are a matter for the negotiation itself. But I hope that this letter can provide a clear basis for reaching an agreement that would, of course, need to be legally-binding and irreversible — and where necessary have force in the Treaties. I look forward to a substantive discussion at the December European Council.

It remains my aim to conclude an agreement at the earliest opportunity, but the priority is to get the substance right. I believe that reform in these areas would address the UK's concerns and provide a fresh and lasting settlement for our membership of the European Union. Furthermore, I believe such reform is both reasonable and in the wider interests of the European Union as a whole.

The United Kingdom is the EU's second largest economy, the fifth biggest in the world. We bring an enormous contribution — political, economic, financial — to the European Union. If we are able to reach an agreement, it will show the world that, amongst the many more difficult issues it faces, the European Union is flexible enough to accommodate the concerns of its members. I hope and believe that together we can reach agreement on each of these four areas. If we can, I am ready to campaign with all my heart and soul to keep Britain inside a reformed European Union that continues to enhance the prosperity and security of all its Member States.

I look forward to discussing this with you and colleagues further in the weeks ahead.