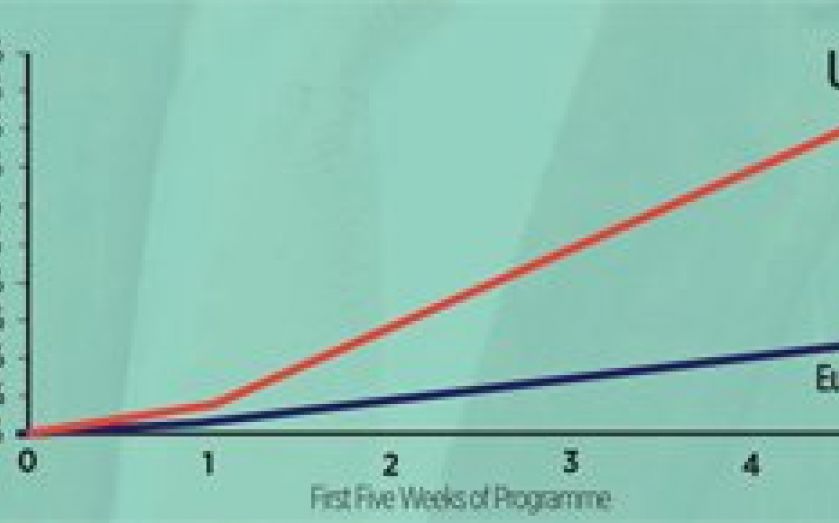 However, economists remain pessimistic with regard to the size and scope of any future purchases.

“If not, we will have to consider buying other assets, including sovereign bonds,” he told a London audience yesterday.

So far, the ECB’s purchases of private sector bonds has failed to inspire and its initial pace lags behind that of the UK’s March 2009 programme in terms of per cent of GDP. It is also slowing with the value of purchases in the fifth week totalling €2.1bn (£1.7bn), lower than the fourth, third and second weeks.

Many economists believe politics will continue to get in the way of any ambitious attempt by ECB chief Mario Draghi to buy government bonds.

“If the ECB had a clear mandate from the European government to do this they could, and they could stimulate the Eurozone economy very quickly, on a very big scale,” Tim Congdon, director of International Monetary Re­search, told City A.M.

“The reason they haven’t done this is due to all the obstacles in the Maas­tricht treaty – all driven by history and the success of the Bundesbank in postwar decades.”

Congdon advocates buying government bonds with a long maturity, which are mostly owned by non-banks – as UK policy makers did. Doing so would boost the bank deposits of individuals and companies, allowing them to spend more.

“The ECB’s natural caution and the vocal objections of Germany suggest that the markets are probably right not to expect much of any QE [quantitative easing] programme,” said economist Jonathan Loynes from Capital Economics.

Germany is currently taking the ECB to court over a promise made by Mario Draghi in 2012 to buy government bonds in an emergency.