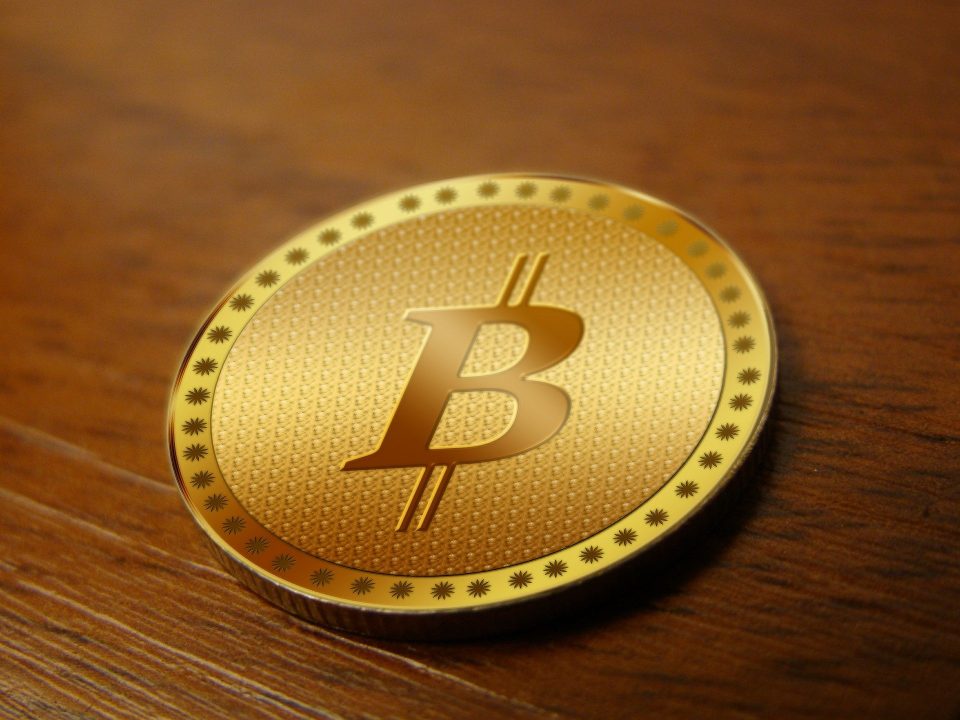 It was an uneventful week for Bitcoin and the larger crypto market, with the leading cryptocurrency fluctuating between the $43,000 and $48,000 mark. According to data from CryptoCompare, Bitcoin’s price increased 1.39% over the last week, price movement which many would consider lacklustre for the world of crypto.

Ethereum’s Ether – the second-largest cryptocurrency by market capitalisation – followed Bitcoin’s lead, rallying to a price of $3,650 toward the end of last week before falling back to its current trading price of around $3,100. Week-on-week, Ethereum is down 1.56 per cent. Despite the price decrease, the Ethereum network continues to burn tokens, with the last negative daily issuance occurring on September 9. 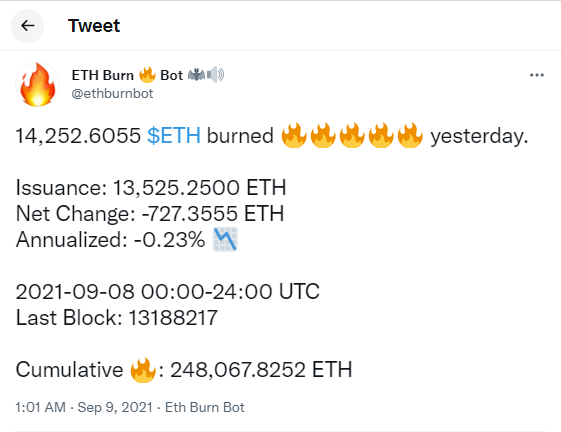 Crypto ETP provider, 21Shares, released the first Solana ETP product in mid-August which was met with high demand, seeing $49.4m in net inflows during the week starting September 6 – more than any other asset in the same period.

In August, Bitcoin had net outflows of $62mn – the fourth straight month of net outflows for Bitcoin-based products. In the first week of September (starting August 30), however, this trend reversed with Bitcoin products recording inflows of $59mn, the highest amount of weekly inflows since the flash crash in May. 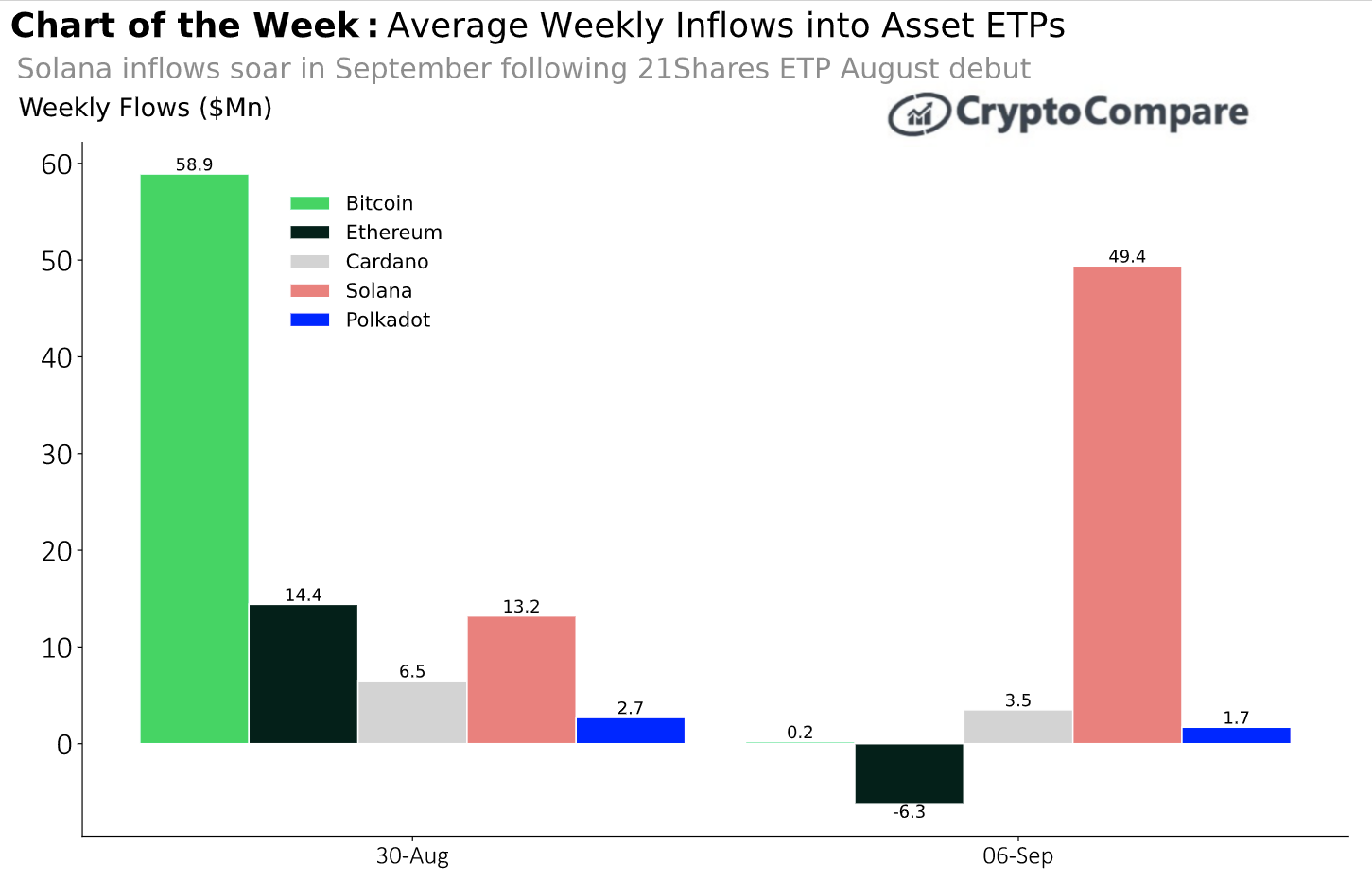 Despite increasing institutional interest, the Solana network suffered growing pains last week – experiencing a major network outage that lasted for more than 17 hours. The cause of the outage stemmed from “resource exhaustion” after a large increase in transaction load, which peaked at 400,000 TPS.

Solana’s price was impacted by the network downtime, falling from approximately $170 to $142. At the time of writing, Solana was trading near $140.

Two days prior to the Solana network outage, Blockchain advisory firm and investment partnership Moonrock Capital announced the purchase of two Solana NFTs from the Degenerate Ape Academy and SolPunk collection for 5,980 and 1,388 SOL, respectively, or $1.1m and $260,000 (at the time of purchase). Interestingly, Moonrock Capital aren’t the only firm seeking NFT exposure, as, toward the end of August, Visa purchased a CryptoPunk NFT on the Ethereum blockchain for $150,000.

Staying on the subject of NFTs, OpenSea, one of the largest NFT marketplaces on Ethereum, was met with much controversy after news surfaced that a member of staff may have used insider knowledge to purchase NFTs they knew were going to be displayed on the front page of OpenSea ahead of general release.

“Yesterday we learned that one of our employees purchased items that they knew were set to display on our front page before they appeared there publicly,” said OpenSea.

“This is incredibly disappointing. We want to be clear that this behaviour does not represent our values as a team. We are taking this very seriously and are conducting an immediate and thorough review of this incident so that we have a full understanding of the facts and additional steps we need to take.”

In other news, it wouldn’t be a week in crypto without a hack, scam or pump and dump. Last week, Litecoin was the ‘lucky’ token that saw its price surge 25 per cent following a falsified news release that stated Walmart would begin accepting the payment for online purchases. The news was leaked from Litecoin’s official Twitter account, as well as via GlobeNewswire.

One hour after the announcement was confirmed to be false, Litecoin’s price fell from $220 to $175.

Institutions Across The Globe Continue To Engage With Crypto

Regulation has been an ongoing hurdle that institutions, crypto exchanges, brokers and providers must overcome, or challenge, with the US Senate adding a provision to its $1.2 trillion infrastructure bill that looks to impose regulation on cryptocurrencies. However, this doesn’t seem to have slowed institutional interest in crypto.

Ernst & Young (EY) – a member of ‘The Big Four’ accounting firms – announced via a press release last week that it would be utilising Polygon’s protocol and framework to deploy its own EY blockchain solutions onto Ethereum. EY said it was looking to adopt Polygon’s scaling solutions to boost transaction volumes, providing “predictable costs” and settlement for enterprise customers.

“Working with Polygon provides EY teams with a powerful set of tools to scale transactions for clients and offers a faster roadmap to integration on the public Ethereum mainnet,” said Paul Brody, EY’s global blockchain leader

In other news, Ark Investment Management revised the prospectus for its ARK Next Generation Internet ETF (ARKW) to open the possibility of investing in crypto exchange-traded funds (ETFs) in Canada, according to a filing with the US Securities and Exchange Commission (SEC).