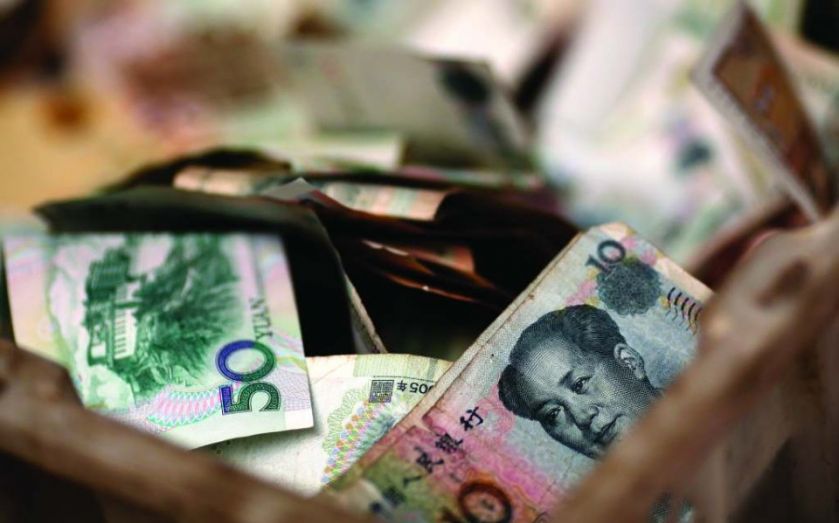 China could be gearing up to join the global currency wars by devaluing the renminbi. So far this year more than 30 central banks from all over the world, including South Korea and Australia, Canada and Hungary have cut interest rates – which works to weaken their currency.
Since the global financial crisis, central banks around the world have been manipulating their currencies, using QE money printing and other methods to force down the value of their currency. This makes the country’s goods cheaper to buy, and makes the value of debt seem lower. This competitive devaluation is known as the “currency wars”.

But China’s renminbi has been gradually strengthening, in part because it is effectively pegged to the value of the US dollar. The yuan has risen close to 20 per cent against the euro over the last year but is essentially flat against the dollar. That’s because as the dollar has risen, the yuan has too.
Meanwhile, Japan is in the midst of a massive QE programme and one of its chief aims is to force down the value of the yen. The yuan has rise 16 per cent against the yen in just a year. This means, on the currency front, China is feeling the squeeze from one of its oldest foes.
Although China has cut its interest rates too – which normally has the effect of weakening a currency – this hasn’t been enough. If the US raises rates later this year as many expect, that will cause the dollar to strengthen further. This will leave China with an even greater appreciation in currency.

WHY SLASH THE YUAN?

The main reason for China to devalue is to make its goods cheaper and boost manufacturing. “Added to the yuan’s rise in value are the salary increases there have been, and China is no longer the competitive manufacturing powerhouse that it was in the noughties. It has lost its competitiveness,” says Gareth Lewis at Tilney Bestinvest.

Meanwhile, despite being a centrally planned, controlled economy, parts of China’s system have gone bonkers in the last year, and the effects are being felt across every strata of society. China’s wayward economy has built up a $28 trillion debt mountain, and part of this has been through shady, off balance sheet, “shadow banking” practices.
That borrowed money has found its way into assets. The stock market has rocketed in the last 12 months – which some analysts are calling a bubble – but it is unravelling and the authorities have made desperate attempts to prevent a massive stock market slump.
Property prices too were in overheated bubble-like territory, but this has started to turn. “It’s pretty clear the property market has changed drastically and the hot money situation has become the opposite, outflows,” says John Hardy of Saxo Bank.
It may seem odd that China’s ever-watchful authorities would allow these kinds of excesses to happen, but for ordinary people “having the equity market booming and allowing people to borrow and make money on stocks is a great wealth effect for China’s citizens”, explains Eric Verleyen of Societe Generale Private Banking. It makes people feel they are participating in a booming economy.

With all this going on, China’s growth is slowing. Some economists believe official figures paint a rosier picture than what is happening on the ground. “Glitches in the way [China] calculates GDP have caused it to overstate growth in recent quarters,” says Mark Williams of Capital Economics.
Authorities have recently made a string of policy changes all aimed at preventing crisis. “If you look at the overt interventions [in markets and the economy], it smacks of desperation,” Lewis says.
Devaluing the currency would be China’s latest bid to shore up its economy. “One of the ways the state can kick-start demand is by lowering the currency,” Lewis adds. “There is a possibility that the next policy tack will be to devalue.” He believes this is a possibility at the end of 2015 or early next year.
One effect would be deflation in the West, “imported” from overseas. This is problematic since Europe and the UK have been struggling to raise inflation rates above zero. “If there was a 20 per cent devaluation in the yuan, China’s goods and services would become cheaper and there would be a wave of deflation around the world,” Lewis says.

However, in the autumn China is hoping the IMF will pick the renminbi to join the elite basket of four major world currencies held as global reserves. This is called the “special drawing rights” basket and consists of the most important currencies; the US dollar, euro, sterling and Japanese yen.
China is so keen on inclusion in this currency basket, it is are unlikely to devalue the renminbi before the autumn, when the IMF will decide whether to add the yuan, explains Anna Stupnytska at Fidelity Worldwide Investment. “This means the economy will continue facing headwinds from the strong currency and growth will have to come from other sources, rather than exports.”
20% Amount the yuan has strengthened against the euro in the last 12 months
30% Fall in the Shanghai Composite stock market over one month to 8 July
$28 trillion China’s total debt mid-2014, according to McKinsey Global Institute