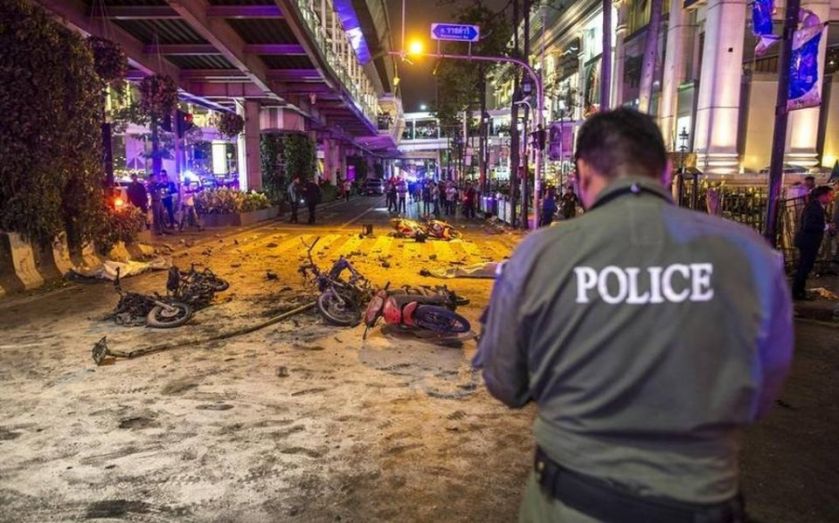 Update: A bomb that went off in a busy Bangkok street today is thought to have killed at least 19 people, amid reports that a second device has been found.
The "huge" blast occurred at 7pm local time today, near the Erawan Shrine, Bangkok, by the busy Ratchaprasong intersection in the centre of the city. The shrine is popular with tourists as well as locals and located near a five-star hotel.
"The perpetrators intended to destroy the economy and tourism, because the incident occurred in the heart of the tourism district," defence minister Prawit Wongsuwan told Reuters.
Thailand's national police chief general Somyot Poompanmoung confirmed at least 19 people had been killed, but some reports have put that death toll at 27. A further 120 people have been injured, some of whom are being treated in local hospitals.
There are thought to be 10 Thais, one Filipino and one Chinese national among the dead.
At least two bombs were found at the scene, only one of which had detonated, Weerachon Sukhondhapatipak, a spokesman for Thailand's ruling junta, told Reuters.
Police were quick to confirm the incident was caused by a device, but have yet to identify the person or persons responsible.
“I can confirm it was a bomb, we can’t tell which kind yet, we are checking,” national police spokesman lieutenant general Prawut Thavornsiri told AFP.
According to Bangkok Post, police have said the bomb could have been "hidden in a motorcycle".
The video below shows the moment the blast occurred.
Social media users posted images of the blast.
https://twitter.com/RichardBarrow/status/633251475125235712
https://twitter.com/bedom73/status/633252830162362368
One Periscope user was streaming video from the scene of the incident, revealing a large number of emergency services on the ground. The stream showed some people being taken away on stretchers.
The Thai capital has been relatively peaceful in the last year or so, following a period of turbulence. A military junta deposed a civilian government in a coup d'etat during May last year, following months of protests against the ruling party.