Tesco, Sainsbury’s, Asda and Morrisons saw their sales growth dip below the market average of 3.2 per cent in the 12 weeks to 10 November, Kantar Worldpanel said yesterday.

Symbolically, Tesco’s market share dipped below the 30 per cent mark. 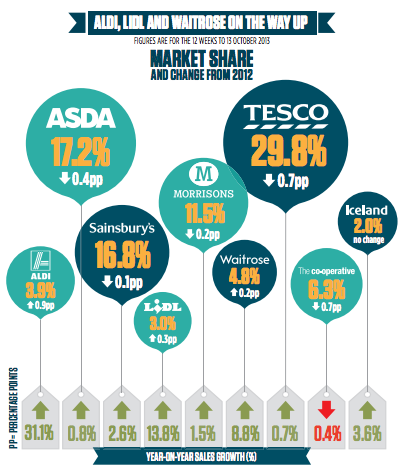 In contrast, Aldi’s sales leapt by 31.1 per cent in the period and its market share increased to 3.9 per cent compared with three per cent at the same time last year.

“Almost a third of British households have shopped in Aldi in the past 12 weeks,” Kantar director Edward Garner said.

“The number of shoppers visiting Aldi has grown by 16 per cent year-on-year at the same time as the average basket size has swelled by nearly 15 per cent.”

The data shows discounters and upmarket retailers squeezing those occupying the middle ground as consumers polarise their spend.

Waitrose upped its market share again from 4.6 per cent to 4.8 per cent while sales grew 8.8 per cent.