The biggest story since the end of the Cold War: China’s new anti-West axis 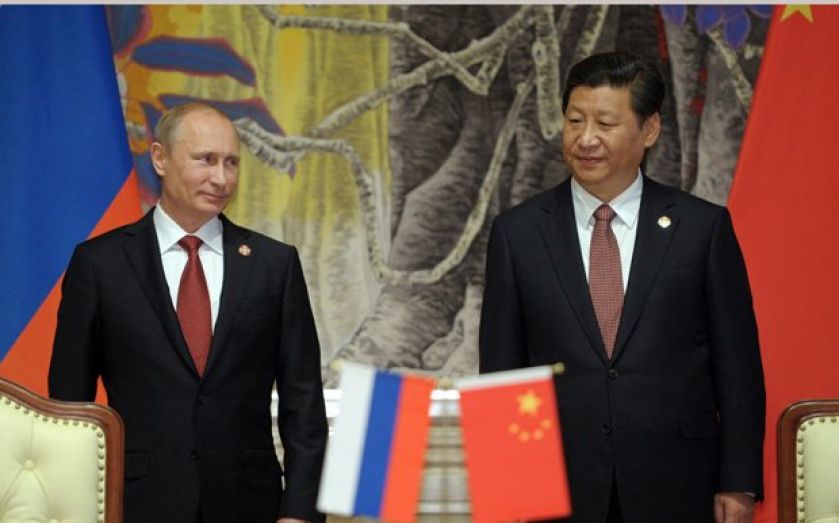 IN THE words of the great stoic philosopher Marcus Aurelius, “The object of life is not to be in the majority, but to escape finding oneself in the ranks of the insane.” By this definition, the greater number of foreign policy analysts ought to be speedily locked up, as they have so underrated the seismic global shift instigated by President Putin’s huge gas deal with China’s Xi Jinping last month.It is not that the deal was beyond the realm of mortals to foresee. In fact, I am immensely proud that my political risk firm predicted the new economic tie-up ahead of the fact, down to the week it occurred (see my website). But its vast importance was almost immediately ignored, supplanted by far more trivial goings on, such as Barack Obama’s West Point speech, detailing his vision for the US’s future role in the world, and whatever is happening in Syria and Egypt.Even many of those who briefly – like a meandering fruit fly – commented on the deal only managed obvious banalities. Yes, China does better out of the new link than Russia, and the gormless West did push a desperate Putin to cast about for other allies (though his thuggish behaviour in Crimea and Russia obviously also played a major part). All of that is true, and all of that misses the enormity of what has just happened.For the deal is only tangentially about China securing gas resources, and Moscow hedging against highly unlikely, much more biting European sanctions, or a coherent European energy policy that would move the continent away from dependence on Moscow.To see that this deal is first and foremost about geopolitics is critical. During Putin’s brief visit to Shanghai last month, Xi proposed a new regional Asian security organisation, including Russia, Turkey, and Iran, but excluding the US. Moscow and Beijing also engaged in joint military exercises off the Chinese coast. In other words, the gas deal was simply part of a larger Sino-Russian diplomatic gambit – admittedly still in its very early stages – presenting the first real geopolitical challenge to the United States in a generation.What we witnessed was the fledgling creation of a new anti-western axis, with China as its leading light, but with potentially enough heft to do nothing less than challenge Western dominance over the medium term.If this is so, it amounts to the biggest geopolitical story since the end of the Cold War. For such a tie-up undoes the brilliance of Henry Kissinger and Richard Nixon going to China in 1972, wherein (and despite the Vietnam calamity) America managed to become closer to its two main competitors – China and the USSR – than they were to each other, thus ensuring US dominance. Or in shorthand, Putin to Shanghai undoes Nixon to China. If China and Russia find general common cause and move closer to each other than either is to America, the global chessboard is irrevocably altered.There will not be a formal series of anti-Western treaties ostentatiously signed in some palace outside Moscow; the multipolar world we live in is far too fluid for this. But saying this does not negate the fact that the new geopolitical currents unleashed by the gas deal allow for the formation of a semi-coherent anti-Western bloc to generally (if not always) challenge Washington’s heretofore-undisputed dominance.In the gas deal – by creating a new indelible, common economic national interest – Xi and Putin have shifted the basic general strategic calculations of both their countries. The drift of Russia, China, Germany (a country that must be seen as increasingly neutralist), and many of the rising emerging markets into a common supply chain allows us to dimly see for the first time the outlines of the new era we find ourselves in. This is not about gas; it’s about history.For the White House, the diplomatic strategy to counter China is to make America’s pivot towards Asia more than just a conceptual exercise. Obama must secure Trade Promotion Authority from his increasingly protectionist Democratic Party immediately, citing national security as the overriding pretext. Armed with this power to negotiate a deal with America’s putative Asian allies, which Congress must then simply vote for or against, the White House must speedily wrap up the Trans-Pacific Partnership free trade deal, economically uniting allies around the Pacific Rim while pointedly excluding Beijing. Such a recalibration of the balance of power in Asia ought to make China hesitate about moving forward full throttle with its anti-Western grouping. Now that would mark a counter-move worthy of Kissinger and Nixon.Dr John C Hulsman is senior columnist at City A.M., and president and co-founder of John C Hulsman Enterprises (www.john-hulsman.com), a global political risk consultancy. He is a life member of the Council on Foreign Relations, and author of Ethical Realism, The Godfather Doctrine, and most recently Lawrence of Arabia, To Begin the World Over Again.