Balance sheets to the streets: the DiverCity Podcast dives into corporate Pride 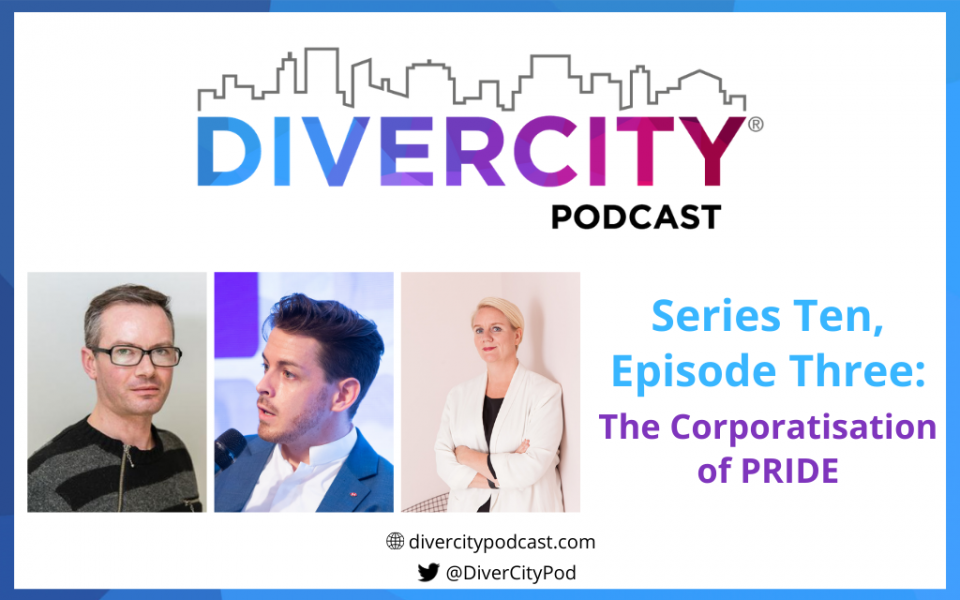 DiverCity® Podcast · The Corporatisation of PRIDE

February was LGBT history month – a time to reflect and recognise those who have empowered change before us and champion the collective pride of LGBT individuals and their allies.

Each year, LGBT history month provides us with time to acknowledge how far we have come since the Stonewall Riots in the US in 1969 and also to consider where we must focus next.

Today, Pride – the global movement fighting for equal rights for LGBTQ+ people all over the world – is emblazoned with the ideals of diversity, inclusion and representation and has evolved since that spontaneous Stonewall Uprising, where the desire to be seen as respectable and non-threatening to wider American society manifested in predominantly white gay men and lesbians taking to the streets. Today contemporary incarnations of Pride have snowballed, manifesting into over 100 annual events all across the UK alone, a vibrancy and visibility that represents the significant shift towards greater societal acceptance.

We have certainly come a long way, but should also recognise some of the challenges and concerns we must keep front of mind.

Criticisms of ‘pink washing’ – the promotion of the gay friendliness of a business or political body as an attempt to downplay other negative aspects – have become more prevalent, as the corporate world and sponsorship seek to align with the messages and representativeness of Pride.

Although LGBT issues have become increasingly resonant within the corporate world, a great deal still needs to be done to champion representation across gender, ethnicity and the full breadth of identity and orientation. The L and G may be well represented, but many argue that the bisexual and transgender communities are largely left aside.

A true powerhouse on the topic is Dr Daniel Conway, senior lecturer in politics and international relations at the University of Westminster. As my latest guest on DiverCity Podcast, he shared his insight on the history of Pride, and the issues it faces today, and offered his perspectives on the corporatisation of Pride.

Pride, since its inception, has always been traversing the issues of representation, protest, and the integration of business. “White gay men played a prominent role in organising the first Pride parades,” explained Daniel, “much more prominent than lesbians or people of colour or transgender people.”

“There were debates about the balance between celebration and protesting for political or legal demands and about the role of business and other institutions at Pride from the beginning.”

Today, the relationship between the corporate world, Pride, and the LGBT community is nuanced and varied, especially within transnational corporations.

Jack Guest, diversity and inclusion lead at HSBC, knows this all too well, after seeing the contrasts lived by LGBT employees of the firm in both the UK and Hong Kong. As my other guest on the podcast, he says the safe environment in the UK was something ‘not available’ for the majority of employees in Asia Pacific.

Now, bringing consistency across all of HSBC for LGBT people is squarely on Jack’s agenda and he was able to set up a Pride event alongside colleagues in 2011.

“With any change comes opportunity, I’m a real big believer in that,” Jack concluded. He believes there is a “responsibility beyond just lip service, to actually make commitments and to invest in the wellbeing of their colleagues and their customer.”

Commercialisation is now commonplace at Pride in the UK, with businesses having their own floats and sponsoring events. Allyship at all levels is essential and welcomed, as we recognise the power of visibility and the power of role models. And corporations must manage how their presence intersects with the core values of Pride, ensuring their efforts and programmes become a channel to include all.

Corporate engagement is not an exercise in marketing, rather it should be measured in actionable advocacy – and we need to be working towards progress together at all times, not just on a float or in February.